A new approach to workplace boozing

Anton Jura, personnel manager at steel-maker US Steel Košice, says his firm has decided to tackle what he describes as one of the company's most overlooked problems - alcoholism in the workplace.
"There is a problem with alcohol in our plant, but the issue is often avoided as if it didn't exist," he said. "We want to throw some light on it, and help some of our employees, not just do what we did in the past - take strict, repressive measures against workers."
Soon, a team of the company's top executive officers, who stepped into their posts after the American steel-maker US Steel took over Slovak firm VSŽ at the end of November last year, will be trying to bring a more understanding, yet low-tolerance approach to drinking on the job. 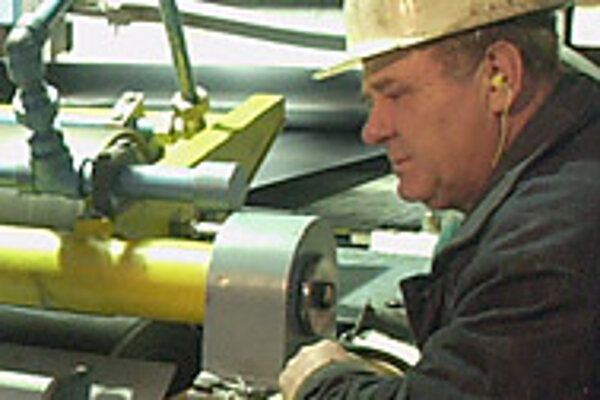 Font size:A-|A+0
Anton Jura, personnel manager at steel-maker US Steel Košice, says his firm has decided to tackle what he describes as one of the company's most overlooked problems - alcoholism in the workplace.

"There is a problem with alcohol in our plant, but the issue is often avoided as if it didn't exist," he said. "We want to throw some light on it, and help some of our employees, not just do what we did in the past - take strict, repressive measures against workers."

Soon, a team of the company's top executive officers, who stepped into their posts after the American steel-maker US Steel took over Slovak firm VSŽ at the end of November last year, will be trying to bring a more understanding, yet low-tolerance approach to drinking on the job.

Between 1994 and 1999, the steel-maker reported more than 1,400 cases of alcohol-related violations of workplace rules. Out of these cases, 160 resulted in subsequent employee firings.

US Steel is far from alone in having to deal with alcoholism in the workplace, a worrying tradition and tolerance for the practice having been cultivated under communism, sociologists and company managers say. Firms such as international white goods producer Whirlpool and central Slovak manufacture Pohronské strojárne have also had to root out and confront problems with their own workers' drinking habits.

However, the approach that US Steel is taking to the problem - a scheme that aims to help employees rather than make examples of them in front of workmates - has been applauded by human resources experts and backed by managers who have already dealt with the problem in the West.

Phillip Drake, US Steel Košice's security manager, said that 20 years ago British companies, in co-operation with the government, invested large sums of money and effort into educating workforces on the dangers of alcohol consumption, and managed to cut back on the numbers of employees taking a tipple in the office or on the factory floor.

"This process has taken years, and as a result people have started to be more aware of the dangers [of drinking at work]. This is the sort of awareness we are counting on producing in our campaign," Drake said.

US Steel's project includes the distribution of various anti-alcohol promotional materials, leaflets, posters and stories in the company's in-house newspaper. "We are even ready to cover the costs of a retreat for our employees who have problems with alcohol," Jura says.

However, in the highly competitive Slovak labour market, it seems US Steel's example is an anomaly. The current 20% unemployment rate has left managers with a wide choice of job-hungry candidates as replacements for anyone who has a drinking problem affecting their work, say experts. This fact has made managers more willing to enforce strict penalties for transgressors of company rules, since they know they can dip into the local labour pool as soon as an erring employee closes the director's door behind him.

"At present, it is unacceptable for firms to tolerate alcoholism. Companies are taking the opportunities they have and laying off employees [found to have alcohol problems]. It is a waste of time and effort to re-educate and rehabilitate these employees, as there are five other applicants waiting to step into the shoes of each person dismissed," said Michal Bunčák of the Slovak Academy of Sciences. "Employee discipline has been strengthened as choice on the labour market has widened."

Representatives of other big industrial firms confirmed that the general climate on the labour market identified by Bunčák had played a part in the way they approached the problem of workplace drinking, with harsh punishments for workers becoming the norm.

Martin Ciran, general director of Whirlpool Slovakia, a branch of American white goods producer Whirlpool, said that the company had decided to mete out exemplary punishments, and had found its problems solved almost immediately. "These kind of punishments have rid us all problems, and at present we have no such cases," Ciran said.

Although firms today are beginning to clamp down on the problem of alcohol in the workplace, managers say it has deep roots in the tacit acceptance of employee drinking, especially in larger manufacturing firms, that was common under the Communist regime. Sociologists say that even top management indulged in the practice before 1989, and, as with petty theft, acceptance filtered down by example to workshop floors.

"We have a saying, 'the fish smells from the head' [i.e. look to the leaders to find the cause of the problem - ed. note]," said Bunčák. "They [managers] used to consume alcohol to cope with workplace stress. With common shift workers, 'booze in the workplace' was more about the secondary effects of alcohol consumption from the night before, which were detected the morning after."

According to Marián Kmeť, personnel manager at central Slovak mechanical engineering company Pohronské strojárne, in Hliník nad Hronom, labour shortages under Communism compounded the problem, forcing many companies to turn a blind eye to drinking because they could not afford to lose employees.

"In the past, measures taken against employees who had tested positively for alcohol weren't as strict as they are now. Czechoslovakia had a labour shortage of about 300,000 employees, which reinforced the past [more lenient] approach of companies like ours," he said.

The situation today has changed, though, with Pohronské strojárne leading the way. "Now, if a check on an employee reveals a blood alcohol content of 0.4 parts per thousand [a level consistent with having drunk a bottle of average-strength beer - ed. note], he automatically loses 20,000 Slovak crowns ($400). Our average salary is 11,000 crowns per month, so one can imagine what the worker's wife tells him when he doesn't bring home his salary for two months," Kmeť explained.

"As a result, we reported only three [alcohol] positive cases last year."

What separates US Steel's approach to drinking at work from those at Pohronské strojárne are both the severity of the punishment and the 'second chance' mentality. If an employee is found to have blood alcohol of 0.3 parts per thousand, he is not allowed to enter the plant area, and loses his bonuses [20% of an average US Steel monthly salary of over 20,000 crowns] for three months. If a test shows a level of 1.01 parts per thousand, the equivalent of having consumed three beers, the employee loses his job immediately.

Human resources experts believe the American firm's programme is an example of the carrot-and-stick approach companies should take to workplace alcoholism.

"To take 20,000 crowns away from somebody would mean destroying his life," said Paul Binder, director for central Europe with human resources firm Target. Companies have to take the lead in showing people an alternative, giving them a transition period, trying to re-educate them, and explaining why it is dangerous to drink alcohol during working hours, he added.

"This is a positive approach which foreign companies can highlight and develop in the Slovak corporate sector," Binder said.

Getting the most out of a culture clash

Nor do official data tell the whole story. According to alcohol treatment clinics, the registered number of alcoholics in Slovakia is 150,000, while the real figure, which has been steady for about two decades, is five times higher, they say.

Changing such a serious cultural problem won't happen in a day, nor will it be helped by strong-arm methods. Ludvík Nábělek, head of the psychiatric department at central Slovakia's Banská Bystrica hospital, believes that companies could gain from showing a more tolerant attitude towards employees failing alcohol checks. "These can be skilled workers, but their only problem is that they have committed what is termed a sin. Employers should give them another chance and support them," he said.

The means of changing the prevailing corporate attitude to the problem lies in the hands of foreign firms like US Steel, he said. Foreign companies, he believes, can bring many positives from their cultures, including rules on employee/employer relations that work on the basis of cooperation, not coercion.

"Slovakia has to get something out of the clash between the two [working] cultures," Nábělek said.