'It's under control' - that's the message from the State Veterinary Authority (ŠVS), which has relaxed measures taken to combat the spread of a dreaded and highly infectious livestock disease into Slovakia. In Britain, foot-and-mouth has forced the slaughter of a huge swathe of livestock, while the disease has spread to three other European countries (Ireland, Holland and France). On March 14, the ŠVS took a series of preventative measures against the disease, which infects cloven-footed livestock. A ban was imposed on imports, exports, and transfers of livestock and hogs, sperm, embryos, meat, and meat products to and from all countries hit by foot-and-mouth disease. Movement between farms by workers or managers was also prohibited, and zoos were closed. 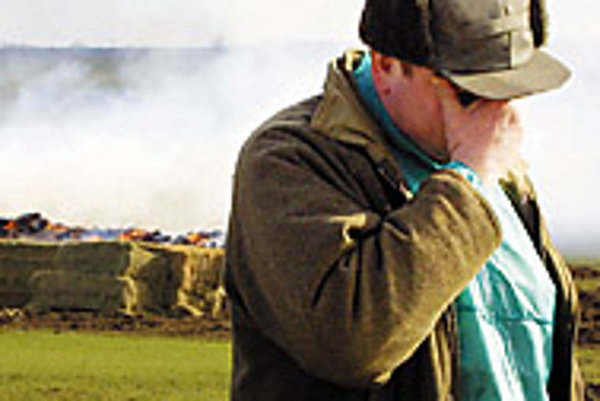 Font size:A-|A+  Comments disabled
'It's under control' - that's the message from the State Veterinary Authority (ŠVS), which has relaxed measures taken to combat the spread of a dreaded and highly infectious livestock disease into Slovakia. In Britain, foot-and-mouth has forced the slaughter of a huge swathe of livestock, while the disease has spread to three other European countries (Ireland, Holland and France). On March 14, the ŠVS took a series of preventative measures against the disease, which infects cloven-footed livestock. A ban was imposed on imports, exports, and transfers of livestock and hogs, sperm, embryos, meat, and meat products to and from all countries hit by foot-and-mouth disease. Movement between farms by workers or managers was also prohibited, and zoos were closed.

For European countries (except the Czech Republic) which had reported cases of the animal disease, the ban also applied to pasteurised milk, processed milk products, meat products, and other goods such as raw leather.

People travelling to Slovakia, who while not affected by the disease can carry it, were forced to clean their shoes on disinfectant mats when entering the country and have had their baggage searched for any products falling under the ban. Cars have had to drive through a special pool of disinfectant in a bid to stop the disease from crossing Slovak borders.

But on April 9, the disinfectant mats were rolled up at border crossings and the restrictions on the movement of people between farms was partially lifted, allowing animals to be moved within Slovakia, but under strict supervision by regional ŠVS representatives.

Agriculture Ministry spokesperson Anna Majkútová explained the move: "The ŠVS and the Anti-Infection Commission [a body set up to oversee monitoring of the disease and implementation of the measures - ed. note] have decided to do this because Slovakia has not seen foot-and-mouth disease cross its borders.

"The measures were imposed for a specific time, which has now elapsed. Because the disease has not yet spread closer to Slovakia's borders, we felt we could relax some of them."

Majkútová warned, though, that the danger was not over and that were the disease to break out in Slovakia it would be "the end of meat production in our country".

Farmers have welcomed the fact that some of the restrictions have been lifted, but insist they will still implement the state's remaining measures while sticking to their own internal procedures to prevent any outbreaks of the disease.

Ladislav Moravčík, director of the Poľnohospodár farming company in southern Slovakia's Nové Zámky, said; "We will still have to keep a regular watch on our three farms and will make sure that workers adhere to strict hygienic conditions [as we watch for the disease]."

All visitors and workers entering his three farms, which together have 2,100 pieces of livestock, still have to go through disinfection procedures. "My workers are careful. They know that if the disease breaks out they will lose their jobs."

He added that although there had been no foot-and-mouth cases as yet, his staff was worried that the disease could cross from western Europe into Slovakia.

Farmers praised the ŠVS's measures in early March after the extent of the disease in Britain became clear and fears grew of a spread to mainland Europe. Aise Bouma, a Dutch cattle and pig farmer in the Myjava region of western Slovakia, said: "Yes, the government has taken sufficient measures against the disease which were stricter than say, in The Netherlands, but it is the responsibility of breeders to follow them.Every breeder should go to sleep thinking about these things."

He added, though, that he still had "serious concerns" about foot-and-mouth breaking out in Slovakia. "Anyone at any time can bring this disease into the country, because the incubation period is a long one - two weeks or more - and it can go undetected."

Scientists in Britain have doubted the efficacy of some of the measures imposed to stop the disease from spreading, especially the disinfection of people, saying that the volume of disinfectant used would have to be much higher to have any real preventive effect.

The Agriculture Ministry's Majkútová agreed, saying that the restrictions imposed, while mirroring those in other European countries, could not wholly guarantee the safety of Slovakia's livestock.

"Nobody can completely prevent infection of livestock with foot-and-mouth. None of the disinfection measures can guarantee that this disease will not get into Slovakia. It's a matter of luck that we don't have this disease, and not due to what measures we have imposed."

While the ŠVS has been keen to promote the success of its border controls against foot-and-mouth, which it estimates will eventually cost the state two million crowns ($42,500), question marks have been raised over the enforcement of the regulations by border police prior to the April 9 relaxation.

On March 31, a member of staff at The Slovak Spectator crossed the Austrian/Slovak border at Petržalka-Berg on the outskirts of Bratislava. While not carrying any meat products, his car, and the 10 in front of him, were not searched for any banned goods (although people were asked to walk on the disinfectant mat).

Only days later a team of reporters from TV Markíza filled the boot of their car with meat products and crossed into Slovakia from Austria. They were not searched either.

Speaking to The Slovak Spectator April 17, the Customs Office's Peter Záborský insisted that his officers had been checking every car and ensuring people were using the disinfectant mats, and that despite the relaxation of some of the measures at the border, customs officers were still on alert for people trying to import meat products from 'at risk' countries.

"You can never have 100% reliability, but my officers were under strict orders to check every car and every person while the restrictions were in force," he said.

While saying that foot-and-mouth is under control in Slovakia, the ŠVS, Agriculture Ministry and farmers are aware of an even greater threat to their livelihoods - Bovine Spongiform Encephalopathy (BSE). The disease, affecting only bovines, forced the slaughter of hundreds of thousands of cattle in Britain after it was suspected that it was linked to variant Creuzfeldt-Jakob Disease, a brain-wasting illness in humans.

Earlier this month the European Union grouped Slovakia along with a number of other central European states as a country "where there was a likely risk of BSE occurring". Agriculture Minister Pavol Koncoš said that the grouping was unfair.

The ŠVS says that measures have been in place to combat BSE since 1996. It has refused, however, to speculate on what may happen to the farming industry were the disease to break out among Slovak cattle.

Majkutová said that the 5,700 head of cattle which had been imported from countries thought to be free of BSE, but which have since reported cases of the disease, are being tested. "None of the samples have yet been found to be infected. But if they were, it would have a huge effect on livestock imports and exports," she said.

For Moravčík, the effects of BSE on his business have already been seen. "Everyone is afraid of this disease, and we've seen this reflected in our sales of beef. They've dropped 30% in the last year."