An admirer of Ronald Reagan and Margaret Thatcher, a fierce anti-communist and (in his own words) a "certified drunk", Slovak author Peter Pišťanek is either loved or hated. Criticised as vulgar and uncultured by detractors, he is praised for his originality and striking humour by fans.
"Pišťanek gave Slovak literature a new style of prose," said friend and literature critic Peter Darovec. "He didn't bother with sensitive or psychological lectures, he didn't bore his readers with moralising. Instead, he clearly, roughly, cynically and humorously described the reality everyone in this post-communist country was feeling, but was unable to express." 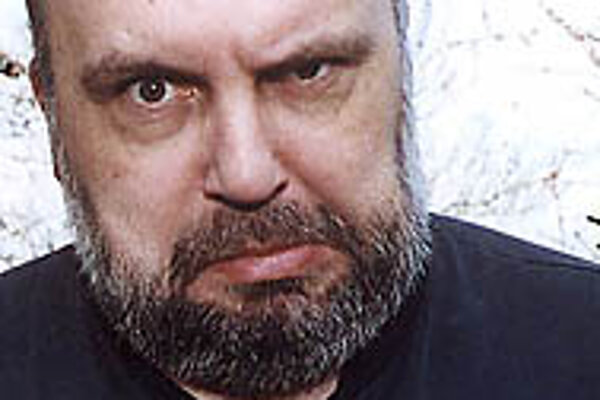 Font size:A-|A+  Comments disabled
An admirer of Ronald Reagan and Margaret Thatcher, a fierce anti-communist and (in his own words) a "certified drunk", Slovak author Peter Pišťanek is either loved or hated. Criticised as vulgar and uncultured by detractors, he is praised for his originality and striking humour by fans.

"Pišťanek gave Slovak literature a new style of prose," said friend and literature critic Peter Darovec. "He didn't bother with sensitive or psychological lectures, he didn't bore his readers with moralising. Instead, he clearly, roughly, cynically and humorously described the reality everyone in this post-communist country was feeling, but was unable to express."

While a mechanic at the Slovnaft oil refinery in Bratislava during the final years of Communism, Pišťanek began writing the first part of his most popular work, the Rivers of Babylon trilogy. As a factory worker, Pišťanek developed his characters: low class, direct, coarse and, most of all, real.

The second part of the Rivers trilogy contains the following passage:

"Soon enough, the first customers enter. They wait. Some stand at the window drinking Pilsner, but the majority drink the local shitty beer; it's five crowns cheaper.

"The fat gypsy Šípoš bangs impatiently on the tavern window with his hardened palm. His impatient, dark eyes are lost in his fat olive face. The beer is served, but it is sour. Yesterday, the bar tender left the tapped keg of shitty beer in the cellar, and the surface oxidised during the night. But Šípoš doesn't mind. He pours the yellow piss into his big smiling mouth under a thick black moustache of hedonism."

Pišťanek was born in 1960 in Devínska Nová Ves, a village near Bratislava. After being expelled from secondary school for truancy, he worked as a backstage hand at the Slovak National Theatre before landing at Slovnaft. Besides the Rivers of Babylon trilogy, he has written Mladý Dônč (Young Dônč) in 1993, Skazky o Vladovi pre veľkých a malých (Stories about Vlado for the Big and Small) and Nové skazky o Vladovi (New Stories about Vlado), all of which were published in 1998. Rivers of Babylon 1 was turned into a film.

Today, Pišťanek is the editor-in-chief of the Internet lifestyle and opinion magazine inZine. He agreed to an interview with The Slovak Spectator March 26 via the Internet; it soon became clear, even on-line, that he is like his characters: biting and abrupt.

"Despite the anglo-saxon sounding title of your paper, your editorial department still employs communist methods which we professionals had almost forgotten!" he said after what he felt was an unreasonable delay in getting his interview into print. After it was explained to him that The Spectator did not have space to run his interview immediately, he apologised.

"He's really crazy," says Darovec. "You ask whether his opinions are too sharp? No. The others are too soft."

The Slovak Spectator (TSS): You were recently hospitalised. Why?

Peter Pišťanek (PP): Just meaningless health problems caused by over-work and a bad diet. But this is not a good topic for an interview.

TSS: Could the experience end up in a new book?

PP: I am the type of author who invents characters and their experiences. My boring and routine personal life does not play even the tiniest role in my texts. I can, however, imagine that some authors are so creative that they can just go to a hospital, get treated for haemorrhoids, and then create a vast collection of poetry. But this is not my case.

Slovak readers should not fear the arrival of another novel with a hospital theme. Furthermore, they shouldn't fear any new novel from me.

PP: The Slovak [fiction] book market is too small. A commercially successful author, like I was, can only sell so many copies. I worked on that book [Rivers of Babylon] for five years and got paid what I earn in one month today.

Of course, I'm not finished as an author, not at all. But I won't write fiction anymore. I have other plans.

PP: I am interested in quality alcohol. I write articles on this topic and I have been to Kentucky, Cognac [France], Calvados [France] and Scotland several times to visit distilleries. I have earned certificates as a professional taster of alcohol. In short, I am a certified drunk.

For several years I have been preparing to write a book about the alcohol regions of the world and the people who live in them. It will include traditional stories and myths tied to alcohol - for example, when writing about Cognac I have to mention the painter Toulouse-Lautrec, who hid the liquor in the hollow of his walking cane, a sophisticated three-decilitre bottle.

The book will also be an encyclopaedia, consisting of whisky production facts and the technical differences between Cognac and Armagnac, for example. I want it to be the perfect read for a holiday, hot grog for a man's spirit.

TSS: Will your book also include a chapter on slivovica, drienkovica and other Slovak hard alcohol?

PP: I have to like a drink's taste and smell. I don't consider myself a snob, but to me alcohol has to have a certain history to it, a myth. Slivovica and other similar alcoholic drinks have never said anything to me. I don't like them, don't know anything about them and I'm not interested in them. The only local region and product that interests me, and which I want to include in my book, is Tokaj [a heavy wine from south Slovakia and Hungary].

TSS: Why are the characters in your books often rough, vulgar people from the lowest social classes?

PP: How can I say what kind of characters they were? They were what they were. They were as I invented them. Read any of my books and you'll know.

TSS: What inspired you to write the Rivers of Babylon trilogy? Many of the characters seemed like the real people we had after the 1989 Velvet Revolution: the money-changers, the Mafia thugs, prostitutes and quasi-businessmen. Was your goal to entertain readers or to make a statement about that period?

PP: I'm sorry, but again I can't answer why I chose the characters I did.

I started to write the Rivers of Babylon around 1984 or 1985, while working at Slovnaft. I only had the central theme of the story in my head, concerning the main character: Rácz, a person who finds work as a stoker, who despite his insignificant position turns himself into a dreaded master of other people's lives. In short, an absurd metaphor.

I don't know now what inspired me. I ended up putting the story aside in frustration because I didn't know how to finish it. It wound up in the bottom of my drawer.

I realised only after the winter of 1989-1990 that the changing times had given me the inspiration I needed to finish. I pulled it out, added a group of bankrupt former secret policemen, cut it, re-edited it, and in 1991 published it.

I have difficulties now trying to figure out what my goal was at that time. Originally, I entertained myself with writing. Till 1990, I'd never thought about publishing. Not that my texts couldn't have competed, but I didn't want to go public during that era. I lived in internal exile. Everything in my life began after the [1989] revolution.

I never intended for my writing to send a message. If I want to send messages, I'll send a telegram.

TSS: Why didn't you want to publish during Communism?

PP: I come from an anti-communist family. Both my grandfathers were Czechoslovak legionaries and fought the Bolsheviks in Siberia. I always perceived Communism as something abnormal, deviant.

Despite that, the 1970s were not a grey period of depression for me. I was young and exploring life, I got drunk, smoked a cigarette and slept with a girl for the first time. I read books, went to the cinema, listened to rock and jazz, played in a music group. I had fun. I was happy.

I was aware that I was living under a system which was disgusting and unhealthy, but it could not take away from my happiness in life, love and exploration.

TSS: How did your life change after the revolution.?

PP: Mainly because I was no longer a worker, I found a job truly reflecting my skills. I began to be more social, I took off my oil worker's pants.

TSS: How do you view politics today? Is it how you imagined it would be?

PP: I never imagine things. I take things as they are. The modern political situation is sad, but not hopeless.

But I get angry because Slovak politicians are so unreliable. I considered entering politics, but decided against it. Democracy is based on the false assumption that the majority is always right. I cannot agree with this.

Since the fall of the Austro-Hungarian monarchy, it's been useless to discuss how modern society should be. But I'll tell you this much: the leader of a country should be an heir assigned by God. I know it sounds funny today.

TSS: Monarchy? Isn't that a bit archaic? Wasn't that idea overthrown by the people? By the way, in the US, democracy seems to function quite well.

PP: By whom was it overthrown? Could you tell me, please? Why are there monarchies remaining on European maps even today? And to mention the US in the same breath as Slovak democracy is ridiculous.

You know what important ingredient our democracy is lacking? It's simple: we lack Americans. We lack the ordinary American, whose ancestors built the country, freed it from the British and the French and valued the sacred ideals that created the country it is today.

TSS: The main problem facing Slovakia in its EU accession process seems to be the 'Roma issue'. Do you think Slovaks are racist?

PP: What is racism? It's an unreasonable prejudice towards a person with different skin. My fellow citizens' skins could be purple for all I care. As long as he or she holds the same values as I do, I have no objections.

However, a major part of the Roma population lives a parasitic life and many people don't like this, especially now when we all have to tighten our belts. This a social problem, not a racist issue. The wolf is not killed because his fur is grey, but because he steals sheep.

But what has this all got to do with the EU? How can they claim to be able to educate us? How can Germans teach us tolerance, for God's sake? Or the Swedes, who exterminated their own Roma population last century? I don't like this, when they hold us captive to their so-called 'understanding' of the Roma issue.