Last spring, The Slovak Spectator knocked on the door of the Cameroon Honorary Consul to Slovakia hoping for an interview for an article profiling Bratislava's African community. Angola had a Bratislava embassy, but Cameroon's consulate was more conveniently located - a large Cameroonian emblem marked its place on Bratislava's main square.
A Slovak woman answered the door, invited the reporter into a plush office and explained that the honorary consul, Eduard Jahchan, was out of the country and could not be reached - not by phone, fax or e-mail. Vice-Consul Emile Noel Kindji was also absent. 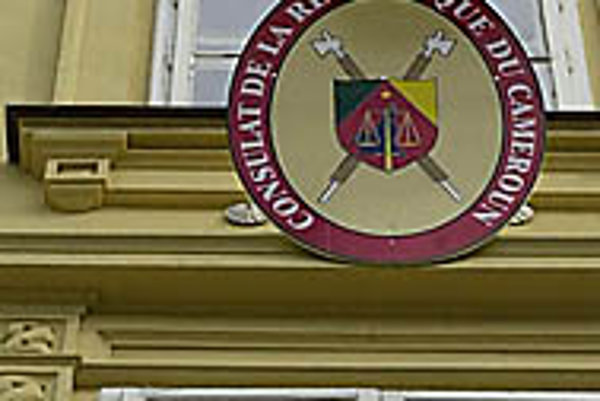 Font size:A-|A+  Comments disabled
Last spring, The Slovak Spectator knocked on the door of the Cameroon Honorary Consul to Slovakia hoping for an interview for an article profiling Bratislava's African community. Angola had a Bratislava embassy, but Cameroon's consulate was more conveniently located - a large Cameroonian emblem marked its place on Bratislava's main square.

A Slovak woman answered the door, invited the reporter into a plush office and explained that the honorary consul, Eduard Jahchan, was out of the country and could not be reached - not by phone, fax or e-mail. Vice-Consul Emile Noel Kindji was also absent.

Almost a year later, information has surfaced suggesting that Jahchan may have been a sham all along. The Slovak magazine Plus 7 Dní April 16 published a letter from Cameroonian Ambassador to Moscow Ngongang Ouandji, whose jurisdiction covers Slovakia, which said Jahchan had never been authorised by Cameroon to act as foreign consul to Slovakia. After confirming this information by phone, the Slovak Ministry of Foreign Affairs vowed to strip Jahchan of his post.

"We're glad the magazine caught this," said Foreign Ministry spokesman Boris Gandel. "We're waiting for the official letter from Cameroon saying that Jahchan was never asked to be consul. He will then lose his consul status."

"We are hoping he will voluntarily return the consul licence plates on his car and take down the Cameroonian emblem from his office," Gandel added.

After being off the hook for a week, the phone at Jahchan's consulate was answered April 24 by a secretary who said that Jahchan would not comment until the matter was officially resolved, until which time the consulate would continue to function as normal.

But the consulate's 'function' is unclear. With Jahchan and his consulate employees silent, the details on his background are sketchy and the purpose of his prominently located consulate is uncertain.

Plus 7 Dní reported that Jahchan was a 30-year old Bratislava-born Slovak businessman. In 1998, says the Foreign Ministry, he applied for and received the title of Honorary Consul to Cameroon under former Foreign Minister Zdenka Kramplová. Since few records were left by the previous administration, the ministry now says, it has been impossible to ascertain if Jahchan forged a request from Cameroon that he be given the post, if the ministry ignored the need for such a document, or if someone simply made a mistake.

Kramplová told The Slovak Spectator that requests for consulates passed through many hands, but that she did not recall anything suspect about Jahchan's.

The Cameroonian side was also stumped on who Jahchan was and how he got the position. "I have no idea who this person is," said Ambassador Ouandji.

A source close to Jahchan told The Slovak Spectator that Jahchan had attained the post legally, but refused to comment on Ouandji's statements. "I'm 100% sure that a mistake has been made," the source said. "He did his best to make a prestigious consulate for Cameroon, he became visible, and was punished for this."

The associate would also not comment on how the consulate office's rent, around 60,000 Slovak crowns ($1,200) per month according to real-estate firm IRB, was paid, or what affairs were administered by the consulate.

Jahchan is registered as an executive and part-owner of two Slovak firms involved in wholesaling, advertising, and trading valuable metals. The firms' combined basic capital is 180 million Slovak crowns ($3.75 million).

The benefits attached to being an honorary consul, an unpaid position, are few (see chart). Other consuls to Slovakia said they received no monetary gain for representing their countries.

"No economic gain comes with the job," said Franco Pigozzi, who was asked to serve as Honorary Consul to Košice by the Italian Ambassador to Slovakia in Bratislava. "You spend most of your time helping companies find contacts and explaining to them laws and procedures here."

Gandel said he did not know why Jahchan had wanted to be consul to Cameroon, or what he had been doing over the past three years. He added that under the previous Foreign Ministry it had been easier to obtain a consul post. Since 1999, those applying for the position have had to be cleared by other Slovak ministries, although the Foreign Ministry has the last word.

"[Current Foreign] Minister Kukan ordered that we examine the validity of each of the 23 Honorary Consuls to Slovakia," said Gandel. "There was no reason for us to go back and check all the consuls before this incident. We aren't expecting to find any more [fraudulent] cases, at least we hope not.

"This hasn't been a pleasant thing."

Gandel said the checks should be completed soon, and added that the Foreign Ministry was not considering pressing criminal charges against Jahchan.