Slovakia has been shaken by concern from the European Union (EU) over possible corruption in how the country's Government Office has used hundreds of millions of euros in funding from EU taxpayers.
Based on suspicions that over 330 million euro in funds sent to Slovakia through the EU's PHARE and ISPA transfer programmes since 1998 may not all have been distributed fairly, the European Commission, an EU ruling body, decided on April 6 to freeze funding for new development projects in Slovakia, and to cancel preparations for the projects.
At the time, suspicion fell on Roland Tóth, a 28 year-old Government Office employee who was Slovakia's lead negotiator on development project funding from the EU. 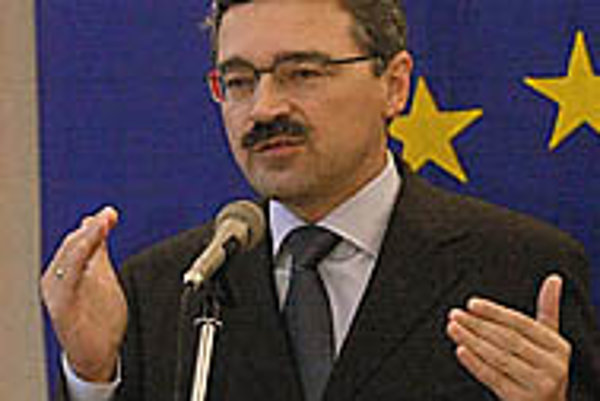 Font size:A-|A+  Comments disabled
Slovakia has been shaken by concern from the European Union (EU) over possible corruption in how the country's Government Office has used hundreds of millions of euros in funding from EU taxpayers.

Based on suspicions that over 330 million euro in funds sent to Slovakia through the EU's PHARE and ISPA transfer programmes since 1998 may not all have been distributed fairly, the European Commission, an EU ruling body, decided on April 6 to freeze funding for new development projects in Slovakia, and to cancel preparations for the projects.

At the time, suspicion fell on Roland Tóth, a 28 year-old Government Office employee who was Slovakia's lead negotiator on development project funding from the EU.

But after a Slovak government delegation visited the European Commission on April 27, the latter decided to cancel its sanctions against Slovakia, and to send a special EU team to investigate the situation before taking further action. A source close to the Commission said that if corruption was proven, the EU could demand the return of the disbursed funds. The source could not say whether funding for future projects could be cut as well.

For the moment, however, the Commission is satisfied with Slovakia's promise to launch a criminal investigation in the case, and will go ahead with new tenders for PHARE funding for Slovak projects.

"We hope that the situation will be cleared up as soon as possible so the Slovak people and economy suffer as little as possible," said EU spokesman Jonathan Faull at a press briefing April 27.

While the EU has climbed down from its original sanctions against Slovakia, fears remain that the scandal may affect future relations between the Union and Slovakia, which has declared for itself the goal of joining the EU by 2004.

"It won't have a strong effect on Slovakia's integration ambitions, but it will mean that our entry process will come under close scrutiny from the EU," said foreign affairs analyst Vladimír Bilčík of the Slovak Foreign Policy Association. Bilčík pointed to the fact that the entire European Commission itself had been forced to resign in 1999 for corruption, and said that the EU would not now take a harsh stance towards Slovakia. "I don't think we'll even see a fundamental change in the funding of development projects," he predicted.

The key in this case, say observers and actors alike, is that Slovakia be seen to investigate the case thoroughly, and to mete out condign punishment. As part of that process, the boss of the official under investigation, Deputy Prime Minister for Integration Pavol Hamžík, has come under intense pressure to take responsibility for the actions of his subordinate and resign.

František Šebej, head of the parliamentary European Integration Committee, said that "if the process of distributing EU finances becomes transparent to the point that the EU is convinced nothing like this will ever happen again, it doesn't have to have a direct impact on Slovakia's integration efforts.

"It would help Slovakia to bring its political culture more in line with that of the EU if Hamžík was to accept his political responsibility for the scandal and resign," said Šebej.

That resignation is not likely to come without a fight, however, as Hamžík has denied all responsibility. Having fired Tóth the moment he learned the details of some of his subordinate's actions, Hamžík told The Slovak Spectator April 30, he bore no further responsibility. "I fired the person who caused this whole scandal, so my name is clean," the Deputy PM said.

It was Hamžík who first named Roland Tóth to the position of national executive coordinator for the PHARE project, just as it was Hamžík who, as Foreign Minister in the 1994 to 1998 Vladimír Mečiar government, appointed him as boss of the government's foreign assistance section in 1996. After joining the new Dzurinda government in 1998, Hamžík raised Tóth another step on the ladder as Slovak negotiator for EU financing on the basis of "positive advice from Brussels".

But the move backfired when on March 12, 2001, Roland Tóth's wife Zdenka - the couple is in divorce proceedings - delivered to both the police and Hamžík's office a 70-page file of her husband's documents that she said indicated "the misuse of his job for his own enrichment".

According to the letter written by Zdenka Tóthová that accompanied the package to Hamžík, Tóth was guilty of ensuring that at least six firms which won tenders for carrying out projects sponsored by PHARE were firms in which Tóth was either an owner or a silent partner, and whose other shareholders were his close friends.

The letter, which was reprinted in the May 2 edition of the Práca daily paper, contains detailed accounts of Tóth's other alleged misdeeds.

"I imagine that some of this information is not completely new to you, but to give you a complete picture and help you to understand I have given you the most complex information possible," Tóthová wrote Hamžík.

Imrich Angyal, Vice-President of the Slovak Police Corps, said that Tóthová's letter and file had also triggered a police investigation of Tóth that began in March 2001.

Hamžík's reaction to the information was to fire Tóth immediately. "No person who is suspected of corruption can work for me," he said.

But many of Hamžík's political partners are less interested in what he did last month than in what he didn't do a year ago. Deputy Prime Minister for Minorities Pál Csáky, for example, informed Hamžík in writing of suspicions regarding Tóth on March 22, 2000. "I have to inform you that in connection with Roland Tóth, we are hearing more and more accusations that he is involved in corruption," said Csáky, quoting to The Slovak Spectator from a letter dated over a year ago. In the letter, Csáky also warned Hamžík that "this is a political problem which affects Slovakia's integration efforts."

Hamžík, according to Csáky, replied that he couldn't lay blame on anyone without proof.

"In my opinion, political responsibility lies with Hamžík. He should resign," said Csáky April 30.

Pressure for Hamžík to explain his conduct satisfactorily has also come from senior Slovak government officials who said that the Deputy PM never informed them of the European Commission's April 6 decision to cut Slovakia's funding. They learned the news, they have said, on April 27 through the media.

Hamžík, who admitted to having been in regular contact with Brussels since the April 6 measure, and who learned of the funding cut immediately after the decision was taken, said that "my superiors - the Prime Minister and the Foreign Affairs Ministry - were informed of the whole affair".

But Prime Minister Mikuláš Dzurinda, at an April 28 press conference, denied Hamžík's statement. "If I'm to be honest, I learned of the whole scandal from the media," he said. Foreign Affairs Ministry spokesman Boris Gandel also said: "We were informed of nothing, we received our first letter April 27."

On the same day Slovak papers were suddenly full of the affair, Dzurinda wrote a letter to Hamžík demanding he bring to a May 2 cabinet meeting a written account of what the EU restrictions meant, why they were imposed, and what Hamžík intended to do to make sure the same events were never repeated.

As The Slovak Spectator went to print May 3, a meeting of the coalition council, a senior Slovak government body, was to debate Hamžík's conduct that evening. While the meeting was likely to be tense, given the many demands from ruling coalition politicians that Hamžík leave, one political expert said there was "very little" chance that Hamžík would be forced out.

"Getting rid of Hamžík would create enormous tension in the coalition," said Grigorij Mesežnikov, president of the Bratislava think tank Institute for Public Affairs. The coalition Party for Civic Understanding (SOP), which nominated Hamžík to his post, was currently racked by internal problems, and would not be able to handle such a major shake-up, the analyst said.

"We also have to remember it's just over a year before elections, and Dzurinda won't want to change government posts. And from the pragmatic side, we should also note that Hamžík is probably the most acceptable candidate the SOP could offer for that post."