The Bratislava offices of the Ľudia proti rasizmu (People Against Racism) programme are a mess. A ladder blocking the tiny hallway is used by a volunteer to plaster up one of the tens of anti-racist posters that cover the walls; the unkempt kitchen is littered with dirty dishes; chairs to sit on are few and far between.
But the apparent chaos conceals a hive of activity, all of which is directed towards The Cause: fighting racism in Slovakia.
"Slovaks are racist," comes the bald statement from the centre's boss, Ladislav Ďurkovič, who came to the group because "I realised that tears are not enough to effect change, that you have to do something real." 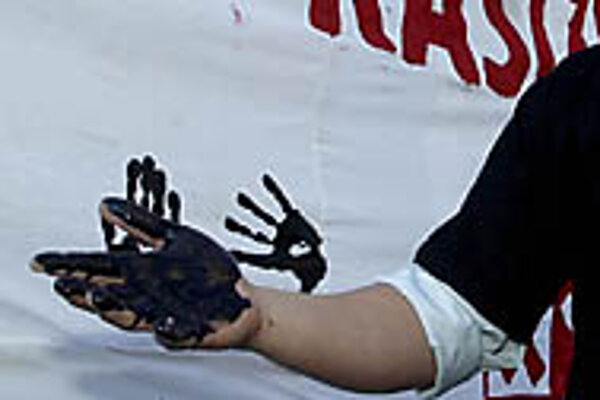 Font size:A-|A+0
The Bratislava offices of the Ľudia proti rasizmu (People Against Racism) programme are a mess. A ladder blocking the tiny hallway is used by a volunteer to plaster up one of the tens of anti-racist posters that cover the walls; the unkempt kitchen is littered with dirty dishes; chairs to sit on are few and far between.

But the apparent chaos conceals a hive of activity, all of which is directed towards The Cause: fighting racism in Slovakia.

"Slovaks are racist," comes the bald statement from the centre's boss, Ladislav Ďurkovič, who came to the group because "I realised that tears are not enough to effect change, that you have to do something real."

That realisation has led to a life of activism. A strict vegetarian for the last 10 years, the native of eastern Slovakia's Košice founded and led the Sloboda Zvierat animal rights group for eight years. Last October he became head of the People Against Racism programme because, he said, nobody else was tackling the issue of race hatred in Slovakia.

While his group is nowhere near winning the war against racism, he says, it has at least made strides in its eight months of existence. People Against Racism has organised rallies protesting fascism on the March 14 anniversary of the formation of the first Slovak state (1939-1945), staged concerts, distributed flyers and erected billboards.

Hundreds of people have written offering assistance, while hundreds of others have sent threats and hate mail. Opening his e-mail box, Ďurkovič shows several messages reading "You will die!", "Heil Hitler", and other vulgarities.

On May 8, the Slovak national holiday commemorating the 'Victory over Fascism' and the end of World War II in Europe, Ďurkovič sat down with The Slovak Spectator to discuss racism in Slovakia.

The Slovak Spectator (TSS): What is the goal of Ľudia proti Rasizmu [People Against Racism]?

Ladislav Ďurkovič (LĎ): To fight discrimination and racism, to bring these issues to the majority. There are many activists working with minorities, but no one else spreads awareness among the majority population.

TSS: Who funds People Against Racism?

LĎ: We're half-funded by the Open Society Foundation and half by the British Know-How Fund, but our budget doesn't include salaries, so even I work as a volunteer. There are around 30 regular volunteers. But as of June we'll have a team of five professionals who will both focus on helping the victims of racist attacks as well as prepare a one-year public awareness campaign against racism. Also, we have a huge database of hundreds of people writing to us and asking how they can help.

TSS: Your beginning wasn't an easy one. Weren't your offices broken into last year after the organisation was established [in October 2000]?

LĎ: Yes. It was one month after we had started. Somebody broke in and stole our computers, copy machines and some other equipment. We also started receiving extremist e-mails in response to our activities. It's rather suspicious, and there's cause to feel that we were targeted, although there was no direct evidence that it was done by anyone out to get us. But I'm not afraid of threats.

TSS: How serious a problem is racism in Slovakia?

LĎ: According to opinion polls, I see that Slovaks are racists. Eighty percent of Slovak citizens would never allow their children to marry a Roma [according to a 1999 poll conducted by the Focus polling agency - ed. note], 55% would never live in a neighbourhood where Roma lived, and 55% would not allow their children to marry a black person. This is a fact: 80% of Slovaks are against the Roma.

You know, when I started out I thought I would organise one campaign and that'd be it. I thought I'd devote maybe six days and then move on, start working on some other issues. But then I realised how deeply ingrained racism is in Slovak society, and I had to continue.

We Slovaks like to think of ourselves as kind people, very nice and hospitable. Perhaps we are, but only with certain people. We don't have a multicultural history, which is why I think we carry so many prejudices.

TSS: Do you think racism is a more acute problem here than it is in other countries?

LĎ: No, I don't. Look at what happened recently in Cincinnati [a US city which experienced several days of rioting last month after a white police officer shot and killed a black teenager - ed. note]. Sometimes I can't believe that this is the 21st century, that people still hate others because of the colour of their skin.

On the other hand, their police forces are more efficient in combating these problems. I once saw a skinhead wearing a swastika T-shirt, and when I alerted a nearby policeman, he said to me "and what can I do about it?" Well, he was a policeman, and wearing and advocating fascist symbols is a crime within all the Visegrad Four countries.

I've called the Interior Ministry when I know that skinheads will gather and cause problems, but they don't do anything. One time I came across a web-site promoting fascist issues; I told them to do something about it. They told me that they didn't have the Internet yet.

TSS: Today is May 8, a national holiday in Slovakia commemorating the end of World War II and the defeat of fascism. From your point of view, do you believe that Slovaks should be celebrating today? Or is there still too much work to do?

LĎ: Slovaks don't even know why it's a holiday today. They just think, 'Hey, it's a nice day, I can spend some time in the countryside.'

TSS: One of Slovakia's biggest obstacles on the path to the EU is its treatment of the Slovak Roma. How can Slovakia solve this issue?

LĎ: It's a tough question, there are so many different angles. The roots of the problem lie in the fact that we segregated these people from our society for over 40 years. And today - it's absurd - we're demanding they suddenly change their lifestyles to fit our culture.

I feel that we [white Slovaks] are to blame for the Roma problem. If I were a Roma today and Belgium rejected my asylum request, I would be very unhappy to be sent back. Walking down a street in London or Paris, I'd be sure that I could get a job in a pizzeria or some place. But not in Slovakia.

For more than 12 months now I've been looking for a job for a 50 year-old Roma man with seven children who has never committed a crime in his life. But it's impossible. The Roma cannot find work here. The majority is against them, and we don't want to admit it. We see them stealing potatoes from farmers' fields, but no one wants to understand why they're stealing potatoes.

TSS: What role do politicians play in promoting tolerance? Statements from members of the far-right Slovak National Party [SNS] in particular have been criticised as irresponsible, even racist. How do such comments affect the fight against racism?

LĎ: Oh, it's catastrophic. But politicians are politicians. Their immunity [from prosecution for statements they make on the grounds of parliament - ed. note] protects them and allows them to say anything they want, like [member of parliament] Robert Fico does. Or, for example, when [SNS member Víťazoslav] Moric said the Roma should be sent to reservations. They're just encouraging average Slovak citizens to think the same things. When people see that some of the 150 most important politicians in the country think like they do, the result is obvious.

TSS: Which politician is doing the most to support the fight against racism in Slovakia?

LĎ: Not a single one. None of them have a real interest in solving this issue.

TSS: Czech novelist Milan Kundera once wrote that a society should be judged based on how it treats its weakest members, by which he meant animals. With this in mind, and given that you are the former head of Sloboda Zvierat, how would you rate Slovak society?

LĎ: That's a very tough question to answer... When people understand how to treat society's weakest members, then they can understand all other creatures. But people are lazy to change, and Slovaks are still not open to some issues. When I raised the issue of racism, the response I got was as if I'd disturbed a beehive. I had simply decided to do something which would make people more aware of a serious problem, but most people felt that this particular problem was too serious, too sensitive.

I'm not a sociologist. But I feel that we Slovaks are racists, and there's no evidence to prove otherwise.