Arguably the country's most stunning castle, central Slovakia's Bojnice zámok is adored by Slovaks and foreigners alike. Indeed, it's so popular that a band of aliens from the Sorios 5 star system have concocted a conniving scheme to beam the castle up to their home planet.
"You know, I really dig this place," says alien C3M (known in his human form as Rado Star). "So I want to bring it back to my home planet. I'm greedy that way."
But his greed is abandoned when an unlikely love affair develops between the alien and Kontesa, a lovely and gentle-spirited ghost. 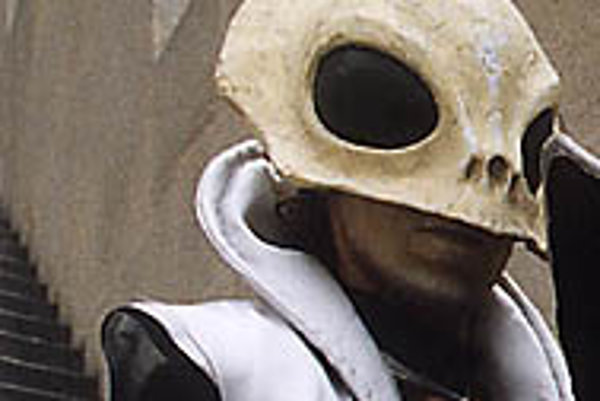 Font size:A-|A+  Comments disabled
Arguably the country's most stunning castle, central Slovakia's Bojnice zámok is adored by Slovaks and foreigners alike. Indeed, it's so popular that a band of aliens from the Sorios 5 star system have concocted a conniving scheme to beam the castle up to their home planet.

"You know, I really dig this place," says alien C3M (known in his human form as Rado Star). "So I want to bring it back to my home planet. I'm greedy that way."

But his greed is abandoned when an unlikely love affair develops between the alien and Kontesa, a lovely and gentle-spirited ghost.

The tale unfolded the past two weekends in a theatrical performance at the 2001 Bojnice Festival of Ghosts and Spirits (Medzinárodný festival duchov a strašidiel), held every spring. Performed by 111 amateur actors, the 90 minute yarn led visitors throughout the castle in an elaborate and entertaining 'Ghost Tour'.

It's really all very simple. The keeper of the castle has handed over the gate keys to the evil witch Lilaba, the ghost master who presides over the festival. The aliens have been monitoring the activities for years and, their interest piqued, have touched down to investigate.

When C3M meets Kontessa, he is immediately smitten, endangering his mission to steal the castle. As feelings between the two intensify, they must fend off numerous advances by Lilaba, a master of disguise who appears in many different forms.

Despite warnings from his alien superior not to stray from the mission, C3M and Kontesa admit their powerful feelings for each other. He removes her ghost mask, an act which can only be done between two parties who are truly in love.

But alas, C3M is after all not of this planet, and the time for his inevitable departure arrives. In a teary farewell, he gives Kontesa a medmobil - an alien mobile phone with which Kontesa can contact her beloved on his home planet. She in turn allows him to complete his mission by presenting him with a giant cookie in the shape of Bojnice castle.

Alone and lonely, Kontesa later tries out the alien device, but gets no response... until C3M appears, explaining that he had turned around mid-flight, drawn back to Bojnice by the galactic power of his affection for Kontesa. Love triumphs.

The 2001 Ghost and Spirit festival marked its eighth consecutive year, the last five of which have been organised by Jozef Mikuláš Pálffy, who also wrote the Ghost Tour script.

The festival has grown larger annually, with attractions this year spilling beyond the castle moat and into Bojnice town. The main square is lined with hundreds of small shacks selling souvenirs, snacks, and spirits. Solitary street musicians and Gypsy bands fill the air with melodies, enthusiastic toddlers with painted faces lead their parents from one site to the next. It's a 10 day party which grips the usually serene town of 5,000 people.

"We get 3,000 visitors to the castle per day during the festival," says Sylvia Pálffy, one of the 'Kontesa' tour-guides and Jozef's younger sister. "Most of the visitors are Slovak, and the foreign visitors are usually German or Austrian. But there are also some French and Italians.

One highlight of the night-time festival activities was the "Lux in tenebris", an eye-catching dance performance telling the history of Bojnice castle, a candle-lit show which runs nightly throughout the non-winter months. During the day, falconers perform on the castle grounds near the zoo, which is Slovakia's oldest, having been opened in 1955.

Other activities throughout the year include Spa Musical Summer, a series of classical concerts held in the castle's Huňadyho Hall. In the winter, "Christmas at the Castle" is a month-long (December 6-January 6) festival with reenactments of the birth of Jesus and live music performances.

But of the castle's attractions, the Ghost festival is still the top draw. And the Ghost Tour is the festival's main attraction, in part because of the enjoyment the guides derive from their work.

"We are all good friends, a mixture of the unemployed, students, working people," Sylvia explained before the first of her six tours that day. "We don't do this for the money, which is minimal, but because we enjoy this atmosphere. We're just a group of good friends. So at the beginning of every day, we huddle together and shout Bona malesiby, which means something like 'let sun shine on your friends' in an African dialect."

When asked what Ghost Tour visitors could expect, Rado Star said: "Whatever, you never know... just trust me. A lot depends on the reactions of the crowd, how much the people are laughing at my acting. I ad-lib a lot, like when I see a monster I might say 'oh, hello grandma.'

"One time I had some deaf people in my group, but I didn't know they were deaf," he continued. "I always have audience participation, and I put this deaf man in a prison torture rack. After the performance, he came up with his kids and wanted a picture taken with me. I hadn't realised until then that he was deaf. But he loved it."

For more information about Bojnice castle events throughout the year, contact Sylvia Maliariková at tel: 0862 543 0633, e-mail: email@bojnicecastle.sk, or check out www.bojnicecastle.sk. English-language tours are available upon request.