Eva forces a smile and says she wants to talk. But as she begins her story of sexual slavery, her chin sinks into her throat and her hand reflexively shields her eyes. "I'm sorry," she says later when a word sticks in her throat. "This isn't pleasant for me."
A hard-luck single mother with no home for her children, Eva was approached by three men in 1999 who offered her a waitressing job in France. She would earn enough money in three months, they promised, to buy a flat for her family in Slovakia. There was only one catch: she would occasionally have to go to bed with strangers.
"I didn't have a choice," says Eva. "I was desperate." 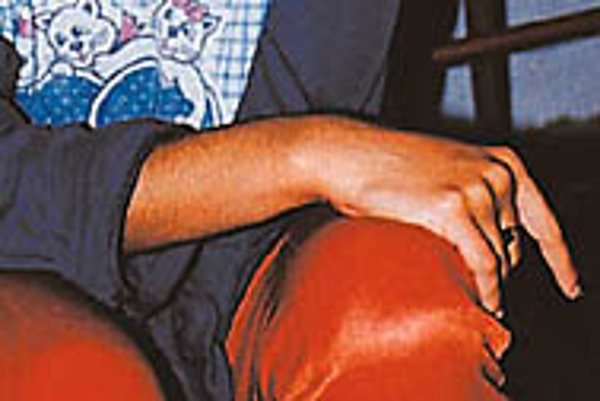 Font size:A-|A+  Comments disabled
Eva forces a smile and says she wants to talk. But as she begins her story of sexual slavery, her chin sinks into her throat and her hand reflexively shields her eyes. "I'm sorry," she says later when a word sticks in her throat. "This isn't pleasant for me."

A hard-luck single mother with no home for her children, Eva was approached by three men in 1999 who offered her a waitressing job in France. She would earn enough money in three months, they promised, to buy a flat for her family in Slovakia. There was only one catch: she would occasionally have to go to bed with strangers.

But Eva never carried a tray. Upon arrival in France, her passport was taken, and that first night she was thrown onto the street to sell her body. She didn't have a break for three days.

For the next year Eva remained under the thumb of pimps. She was beaten and threatened, barred from contacting her children by those who "owned" her. Clients abused and raped her, a friend died of a drug overdose in her arms.

Yet Eva is one of the lucky ones - she escaped. Many victims find no exit once enmeshed in the prostitution underworld that has thrived in Europe since the Iron Curtain fell in 1989. Each year, estimates the European Commission's European Forum for Urban Safety, 500,000 women from former Eastern Bloc countries are trafficked as prostitutes into western Europe. By some counts, Slovaks constitute over 2,000 of those victims.

Lured by promises of high-paying jobs as waitresses, au pairs or exotic dancers, unsuspecting women (usually between the ages of 17 and 25) are instead sold to pimps, who steal their documents and send them to the streets or imprison them in brothels. Friendless and ignorant of the local language, they are kept in line with beatings and threats.

"At least 300 Slovak women work as prostitutes on France's streets. Eighty percent of prostitutes in Germany are from eastern countries," said Marián Kolenčik, president of civil association Dafne, which helped Eva come home last fall from France. "Most of those women, if they haven't been brutally forced into prostitution, have been manipulated and lied to."

Dafne has assisted 28 prostitutes who have returned to Slovakia from countries such as France, Spain, Italy, Greece and Germany since 1998. Foundations abroad, using police contacts and street-work, find Slovak prostitutes working against their will and tell them that if they want to go home, Dafne can help.

"Once they're home, we help them find apartments and work, arrange their paperwork for receiving state benefits and insurance, and provide emotional support," says Kolenčík.

Eva is one of Dafne's success stories. After a change in pimps last summer led to a violent confrontation that landed her in the hospital, a French foundation put her in touch with Dafne. Back for six months, she has an apartment, a new city, and is looking for a job. She is glad to be home, but remains haunted by a year of brutal memories.

"Usually victims want to erase their past and create a new identity. We do our best to help," said Kolenčík. But sometimes, shame is too strong. One Slovak made it home only to be ostracised by friends who didn't believe she had been forced into prostitution. She slid into drug addiction and eventually overdosed.

Police throughout Europe and The International Organisation for Migration say that the sex trafficking industry is growing at an alarming rate. While organisations such as Dafne, with two full-time employees, repatriate a handful of sex slaves annually, organised criminal networks coerce and kidnap thousands more.

Economic disparity between eastern and western Europe has left Slovakia a prime target for traffickers, who prey on vulnerable women desperate for work. According to Kolenčík, the trend towards legalisation and toleration of prostitution in western Europe has exacerbated the problem. Instead of making the industry safer, he says, it has provided traffickers a front of legitimacy.

On the border of East and West, Vienna is one hub for the sex slave trade. Detective Ernst Geiger of the Viennese police estimates that 50 to 60% of the some 3,000 prostitutes in Austria's capital, where prostitution has been legal since 1945, are from former communist countries, many of those from Slovakia. But he says police have no way of knowing how many are working against their will.

"Most girls forced to work as prostitutes never complain to the police," said Geiger. "There's nothing we can do unless they complain."

Viennese police handle only about 30 cases of trafficking annually; Slovak police investigated 16 such cases in 2000. Officials at the International Organisation for Migration in Bratislava say that for every one reported, 10 to 100 more cases of trafficking go unreported.

Fear keeps victims from coming forward. Eva says Slovak prostitutes abroad, whether they started voluntarily or were sold as slaves, never know who to trust. Afraid to flee, afraid to say no, and afraid to complain to police, they become trapped in a web of violence and degradation. Murder and hard-drug use were common features of the world Eva inhabited for a year.

Police across Europe are working to create an international database to locate victims across borders and to expedite investigations. And Dafne has become a member of the umbrella organisation International Abolitionists Federation, which is creating a continent-wide network of aid for sex slaves.

But until those plans become reality, prevention may be activists' greatest tool. Through discussions in schools and informational brochures Dafne warns young women to steer clear of agencies and people promising extravagantly-paying jobs abroad.

And even though it's hard, Eva says she will continue to tell her story so that young Slovak women can learn from her misjudgement. "That year was a catastrophe for my life and soul," she says. "Slovakia has such beautiful women, and criminals are preying on them."