In a hallway outside Božena Gašparíková's office there are four different bins for recycling office waste.
"It's an image thing. You know, we're the Environment Ministry..." laughs the head of the ministry's legislative department as she sits down to explain the country's recently-passed Waste Law.
While the ministry may be concerned that its image is in keeping with its work, the passage of the Waste Law May 15 in an almost unprecedented show of parliamentary unity - 115 out of 119 MPs in the 150-seat legislature voted in favour of the bill - showed that its endeavours are taking on substance as well. 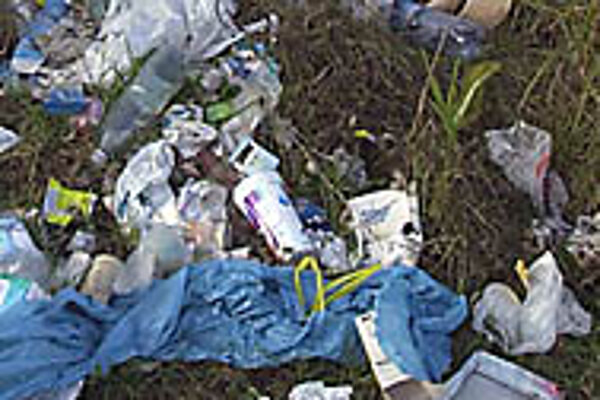 Font size:A-|A+0
In a hallway outside Božena Gašparíková's office there are four different bins for recycling office waste.

"It's an image thing. You know, we're the Environment Ministry..." laughs the head of the ministry's legislative department as she sits down to explain the country's recently-passed Waste Law.

While the ministry may be concerned that its image is in keeping with its work, the passage of the Waste Law May 15 in an almost unprecedented show of parliamentary unity - 115 out of 119 MPs in the 150-seat legislature voted in favour of the bill - showed that its endeavours are taking on substance as well.

"The law wouldn't have been backed with such support had it not been for the importance it had for our EU integration efforts," said Gašparíková, a co-author of the law.

In making waste legislation in Slovakia "88% identical with the EU standards", according to Gašparíková, the country's new Waste Law has been praised by the European Commission, Slovakia's local and central governments, as well as non-governmental environmental groups. It has also been seen by many observers as a key step forward in fulfilling what is one of the most difficult areas of the European Union's pre-accession script for candidate countries, the acquis communautaire.

The acquis's environment 'chapter' is the third largest in its 29 fields, after the free movement of goods, and agriculture. The blueprint for legislative changes in environment calls for the passage of over 300 laws and directives in order to harmonise Slovak legislation with EU standards.

Compared with Slovakia's current Waste Law, approved in 1991, the new rules include regulations on the disposal, import and recycling of waste (see sidebar, this page).

For starters, a Recycling Fund will be set up by January 1, 2002, serving as a regulatory body that will collect money from companies that produce or import any products on a list of 11 types of environmentally-damaging waste. The Fund will redistribute the funds collected to companies which recycle those materials for new products.

But the ministry, while pleased with its achievement in getting the law passed - it had been in preparation for two years - is not content to rest on its laurels.

"This law was one of the biggest and toughest EU requirements in the environment area, and it was a major step forward. But we still have a lot of work to do," said Gašparíková.

Indeed, many environmental and EU experts believe that Slovakia will need to ask for special dispensation from the EU for not meeting all the directives in the acquis communautaire's environment chapter on time. Slovakia's efforts to meet environmental standards have also been hampered by parliament's decision in March to reject tougher controls on air emissions which would have seen fines for polluters rise to 16 times 1998 levels by 2006.

Getting to the root of the problem

Despite the potential headaches with passing all legislation in the environment chapter, the latest law has been welcomed by environmentalists as one which will finally give municipalities a chance to force individuals to take more note of important environmental matters.

"If you create conditions for people to recycle, that is if you put separate waste containers near their apartments or houses, they will separate, and they will be more environmentally-minded," said Ľubica Trubíniova of Greenpeace Slovakia.

Waste rules in individual municipalities will vary under the new legislation, but local authorities are expected to implement waste separation schemes, putting recycling bins on housing estates and in town centres. Fines, as yet undetermined, will be set for any individuals failing to dispose of waste correctly.

Municipalities may also increase a municipal fee to pay for the collection, transport and disposal of communal waste. The current fee is approximately 300 Slovak crowns ($6.20) per person per year, but is expected to be increased to a maximum of 800 crowns.

Municipalities have given a round of applause to the law, saying it will help them improve waste management in the country's towns and villages and give them additional finances from the fines to help deal with a growing problem with waste.

"People are not very sensitive to the issues involved in environmental protection," said Vladimír Faško, mayor of the central Slovak town of Brezno. "After weekends, we regularly have our city centre swimming in bags of waste which people leave near communal waste containers as they return from their gardens and cottages.

"It's a good law. By allowing us to fine people we now have the tools to deal with those who ignore rules concerning waste management," he added.

Martin Maťko, spokesman for the mayor's office in the northern Slovak town of Martin, agreed that the law was a step forward.

"The law was long overdue," he said, explaining that it would introduce respect and awareness of environmental issues among citizens, since they would now be individually culpable for breaking laws on the environment.

But not everyone is convinced that a formal law will bring about a change in social behaviour or informal values concerning the environment. While municipalities anticipate no problems in enforcing the law, sociologists say society's general indifference to the issue of waste could make the change to more responsible waste disposal or separation a long one - fines or not.

"In Slovakia, we have two traditions. One is the agricultural habit of re-using everything at home, even waste, while on the other hand we have some villages where people have no reservations throwing wheelchairs-full of waste into a nearby creek," said Ján Bunčák, sociologist at the Slovak Academy of Sciences.