Afoot in the Tatras

On a recent spring day in the Vysoké Tatry (the High Tatras), I had planned to travel along the electric rail line which connects the major Tatra resort town of Štrbské Pleso in the west to Tatranská Lomnica in the east.
But sitting in Štrbské Pleso, with the sun shining and the temperature touching 20 degrees, I did what any right-minded visitor to Slovakia's magnificent mountains would do: I hiked.
Although the two towns are connected by rail, they are more satisfyingly linked by foot. For those seeking a challenging day-long hike, the trail between the two can be navigated in less than eight hours (not including breaks). 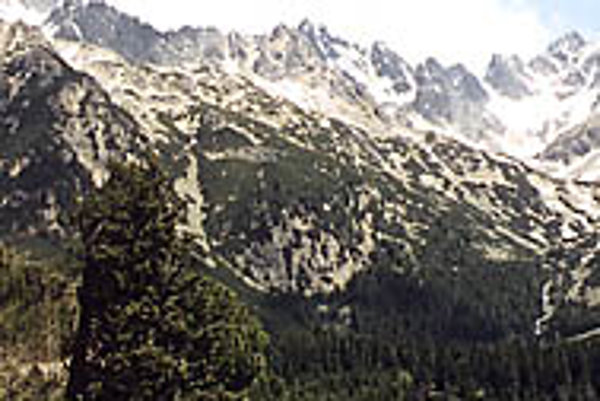 Font size:A-|A+  Comments disabled
On a recent spring day in the Vysoké Tatry (the High Tatras), I had planned to travel along the electric rail line which connects the major Tatra resort town of Štrbské Pleso in the west to Tatranská Lomnica in the east.

But sitting in Štrbské Pleso, with the sun shining and the temperature touching 20 degrees, I did what any right-minded visitor to Slovakia's magnificent mountains would do: I hiked.

Although the two towns are connected by rail, they are more satisfyingly linked by foot. For those seeking a challenging day-long hike, the trail between the two can be navigated in less than eight hours (not including breaks).

Starting in Štrbské Pleso (1,346 metres above sea level), take the red trail just east of the lake. The trailhead is marked by a red paint stripe sandwiched between two white stripes (as are all Tatra trail markers, with the middle colours varying).

The beginning of the hike is the hardest. A fairly steep incline for 40 minutes greets hikers until the path levels off after a trail-fork (stick to the red). For the next 35 minutes, hikers are treated to the first of many great views of the snow-peaked Tatras looming above and the green wooded valley below.

Popradské Pleso alpine lake and its well-known chata (cottage), with beds for rent and a restaurant, await at 1,494 metres. Walk to the north end of the lake, where the red trail picks up again at the bottom of Zlomiská dolina (Zlomiská Valley), where a fierce battle once took place between a protective mother and a thieving dragon.

Local legend has it that a dragon, who had kidnapped a girl from a nearby village, once lived in this valley, writes Ján Lacika in his book Tatras. Although none of the townsmen would dare fight the beast, the determined mother stood her ground, demanded her daughter's return, and when refused, cast a curse upon the monster. It worked, and the dragon turned into stone. Look closely and you can see his tail in the rock formation of Dračí hrebeň (Dragon's Tail).

For an eagle's eye view of the leviathan's petrified backside, follow the red trail above the treeline along switch-backs up to sedlo pod Ostrvou (Ostrava Pass), the highest point of the journey. From atop, the Popradské Pleso chata below is minute, while the lake appears no more than a puddle.

The trail then takes off to the left, hugging the side of the mountain. As you skip from rock to rock, stop and look down - this stretch of the Tatranská magistrála trail offers a striking view of just how high the Tatras are, and how abruptly they rear from the Liptov plain. In viewing the Tatra villages below (Svit, Štrba, Štrbské pleso), hikers sometimes find themselves looking just past their shoe-tops.

An hour and a half later hikers happen upon Batizovské pleso (1,884 metres), a small lake frozen most of the year which as of mid-May was still covered in a thick layer of ice. Snow-melt moving off the peaks flowed in long cataracts down the cliff towards the town of Vyšné Hágy, some 800 metres below. The collection of peaks you see high above include Gerlachovský štít (Gerlach Peak), which at 2,654 metres above sea level is the highest point in both the Tatras and Slovakia.

Thirty minutes later, another fork arrives: the first bail-out option. If you've had enough (or if the weather is threatening, as it likely may be in the Tatras), take the yellow trail down two hours to Vyšné Hágy.

If you move on (again sticking with the red trail), take the high road. Half an hour later you'll descend into Sliezsky dom (1,670 metres), whose boxy communist-style architecture seems offensive amidst the elegance of the Tatras. Offering beds and a restaurant/pub, it sits on the southern edge of the Velické pleso, a lovely clear-green alpine lake with a waterfall pouring into it from the peaks. From the north end of the lake, the green trail leads up to Gerlachovský štít (when open, making the ascent requires getting a hiker's permit, which can be arranged with the Horská Služba (Mountain Service) in the town of Starý Smokovec, just up the hill from the train station in the resort).

Over the next hour on the red trail, hikers descend some 300 metres till the next fork, this time with a green trail headed up to Slavkovský štít (2,452). From here, the green trail going down the mountain leads to Starý Smokovec some 30 minutes away. Otherwise, keep to the red trail for 15 minutes to the mountain resort of Hrebienok, where rooms can be rented in one of the collection of hotels.

Those deciding to push on may here get confused. To get to Tatranská Lomnica, hikers have to pick up the blue trail, which is not to be found from Hrebienok (1,285). Here's what to do: follow the green trail downhill to the sound of roaring water. The track hooks up with the yellow trail (heading down to the rapids in one direction). Follow the green-yellow path upriver till you see a wooden footbridge crossing Studený potok (Cold Creek). From the bridge, the view of the rapids is marvellous as the water crashes down from rocks above you, then collects in little pools before again hurtling its way down the mountainside. At the end of the bridge begins the blue path.

The rest of the trek is a 90 minute downhill cruise through forest to Tatranská Lomnica. Once in town, relax and stay the night. Besides the mighty Grand Hotel Praha (which sits by a gondola lift leading to Lomnický štít - 2,633), budget travellers can stay at the Penzion Bělín for 220 Slovak crowns a night ($4.60).

If you've completed the long hike, you'll surely be hungry. Try the fried cheese or bryndzové halušky (both 55 crowns) at Viecha Tibava restaurant (on the ground floor of Hotel Lomnica, open daily 12:00-22:00), a friendly little joint right by the train station which will be appreciated by all non-smokers: lighting up is prohibited throughout the establishment. Or walk across the street and try Hotel Tatry's Slovenská Pivnica (open daily 14:00-22:00).

A final note: Although posted signs listing the Tatra National Park's rules specifically state (in German, English and Slovak) that tourists should carry out of the mountains all the garbage they bring in, the hiking trails bear a disturbing amount of trash, mostly used tissues, candy wrappers and cigarette butts (who takes a smoke break while hiking?). Visitors to this wild and astoundingly beautiful park are recommended to bring along a small plastic bag to collect any trash they might find along the way.

A more complete version of this article will be published this summer in The Slovak Spectator's sixth annual travel guide Spectacular Slovakia 2001. Leading up to the magazine's publication, travel stories will be printed in this space over the following weeks.
To pre-order copies of this year's Spectacular Slovakia, contact Ján Svrček at 07 5923 3302, or e-mail him at jan.svrcek@spectator.gpp.sk.
To book advertising space, please contact Raluca Benko at 07 5923 3225, or at slspect@gpp.sk.