President Rudolf Schuster had warned the public in the weeks leading up to his state-of-the-nation speech that he would be sharply critical of the Mikuláš Dzurinda government, and the content of his address before parliament May 25 lived up to its billing. Some members of the president's political audience, however, said they were disappointed that many of the criticisms heaped on the cabinet seemed to spring more from personal frustration than from dispassionate judgement, and that Schuster's evaluation of the government's performance had lacked an august, 'presidential' tone.
Schuster reserved most of his criticism for relations between the Presidential Palace and the Government Office, and singled out Prime Minister Dzurinda for special mention. 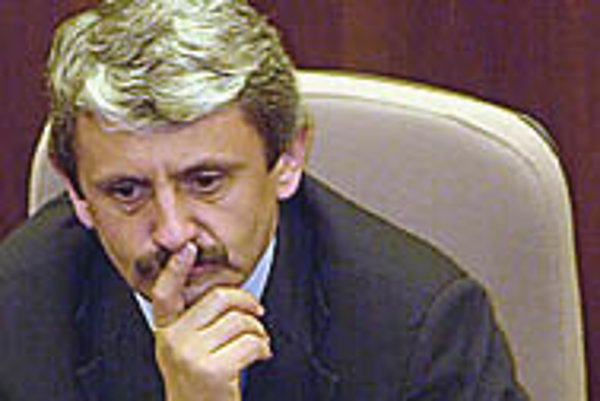 Font size:A-|A+0
President Rudolf Schuster had warned the public in the weeks leading up to his state-of-the-nation speech that he would be sharply critical of the Mikuláš Dzurinda government, and the content of his address before parliament May 25 lived up to its billing. Some members of the president's political audience, however, said they were disappointed that many of the criticisms heaped on the cabinet seemed to spring more from personal frustration than from dispassionate judgement, and that Schuster's evaluation of the government's performance had lacked an august, 'presidential' tone.

Schuster reserved most of his criticism for relations between the Presidential Palace and the Government Office, and singled out Prime Minister Dzurinda for special mention. After saying last month that relations between himself and Dzurinda had begun to resemble those between former Prime Minister Vladimír Mečiar and former President Michal Kováč, political arch-enemies from 1994 to 1998, Schuster complained in his hour-long May 25 speech that Dzurinda often ignored him.

"I am unhappy to say that concrete proposals or objections that I bring from grass-roots experience or from meetings with concrete people, and for which we should be finding solutions, are ignored by the prime minister, maybe simply because these initiatives come from me." As evidence, Schuster cited the PM's decision not to attend a meeting the president had organised with top officials of the Slovak National Theatre.

Dzurinda was also called to account for having launched a new political party in 2000, the Slovak Democratic and Christian Union (SDKÚ). "Instead of concentrating on its work, the government coalition is founding new parties and new party caucuses," said Schuster. "The founding of a new party by the prime minister last year was the origin of unhealthy relations inside the coalition."

After reading his 35-page speech, Schuster shook the hand of Parliamentary Speaker Jozef Migaš, but walked past Dzurinda without a word.

Dzurinda's cabinet colleagues were upbraided for failing to contain Slovakia's serious unemployment problem - the jobless rate hit a record this year at over 20.8% - for neglecting citizens and not fulfilling the government programme of 1998. The government lacked a long-range strategy for the economy, Schuster said, and had been reduced to adopting piecemeal laws that were "marked by populism" and which could have "catastrophic consequences". The president warned that "neither time, nor possibly will-power" remained to solve the country's problems in a well-structured way.

Members of parliament representing ruling coalition parties also took fire, partly for failing to act on Schuster's proposal that they adopt a 'state doctrine' - a long-term strategy document for the country's economy and foreign policy.

Elsewhere in his speech, Schuster faulted the coalition for not sufficiently consulting its crucial February 2001 amendment of the Constitution with the political opposition or legal experts - for which reason Schuster had ignored an invitation to attend the passage of the amendment in parliament. He also warned against selling off state gas utility SPP "at any price", since such haste might be "misused by potential buyers", and said the opposition should be allowed to participate in the sale actively. SPP is the most valuable company remaining in state hands, and is expected to fetch from $2 to $4 billion from the sale of a 49% stake later this year.

Among the sparse praise to be found in the address was congratulations for Slovakia's 2000 entry into the 30-member Organisation for Economic Cooperation and Development (OECD), an international 'club' of developed economies. Schuster also singled out as positive the fact that entry into the NATO military alliance was now promoted not only by ruling coalition parties but by Mečiar's opposition HZDS party as well, and that membership in the European Union was now to be found in the political programmes of all parliamentary parties.

Róbert Fico, an independent MP and leader of the non-parliamentary Smer party, was singled out for congratulations on having helped the president achieve one of his goals - having 'Holocaust Day' written in to the books as a state holiday on September 9. "Luckily, member of parliament Fico took on this initiative and pushed it through to the end. I don't think this needs further comment," said Schuster.

Schuster's closing remarks were followed by an ovation from opposition MPs with the HZDS and SNS parties. Ruling coalition MPs, on the other hand, stood and left the legislature in silence.

The ire of coalition members was due partly to what some of them regarded as favoritism towards Fico and the opposition - precisely those parties which are currently doing well in the polls, and which may have first crack at forming a new government after September 2002 elections. The current government, which scored over 60% support in 1998, is now at about 35%.

František Mikloško, an MP for the ruling coalition Christian Democrats (KDH) party, said that "the president, as he has done his entire life, is snuggling up to those who may get into power. He's gently disengaging from this coalition and opening a door to the next."

Others saw the speech as somewhat hypocritical, given that Schuster had himself headed one of the four original coalition parties from 1998 to 1999, and had thus had a hand in creating some of the problems he now criticised.

The president's apparent sense of personal and professional injustice at being "ignored" by the coalition was what attracted the notice of still other observers. Schuster's speech contained 36 references to himself in the first person, which gave Mikloško the impression that "this address lacked any internal thread of logic, and was simply a reflection of the internal state of our top representative."

Political scientist Darina Malová, of Bratislava's Comenius University, explained the president's focus on perceived insults to his office as springing from his "wounded vanity".

"Schuster wants to engage in domestic politics, and he just can't understand that the Constitution doesn't allow him to," she said, citing disputes between Schuster and Dzurinda over changes to the composition of cabinet.

Tatár agreed, saying "the president still doesn't understand how powers are divided in a parliamentary democracy."

Finally, some observers picked out basic factual errors in the president's speech, such as his claim that MPs had passed laws that were in conflict with the Constitution 13 times since 1998. "That's just not true," said Deputy Prime Minister for Economy Ivan Mikloš, explaining that the arbiter of 'constitutionality' was the Constitutional Court, not the president, and that the former had found only one paragraph of one law passed since October 1998 to be in conflict with the country's basic legal principles.