Reporter Ivan Hriczko: Embodying the hopes of a nation

KOŠICE: TV reporter Ivan Hriczko had just finished his first news broadcast for a Slovak TV network when a woman called the station. She asked to speak to "that darker-skinned reporter".
Eager for feedback, Hriczko jumped to the phone and introduced himself: "Hello, Ivan Hriczko speaking. How can I help you?"
The woman burst out: "Jesus, you can speak Slovak so well! Where are you from?"
"Košice," he replied.
"Yes, yes, but what's your nationality?" she pressed on. 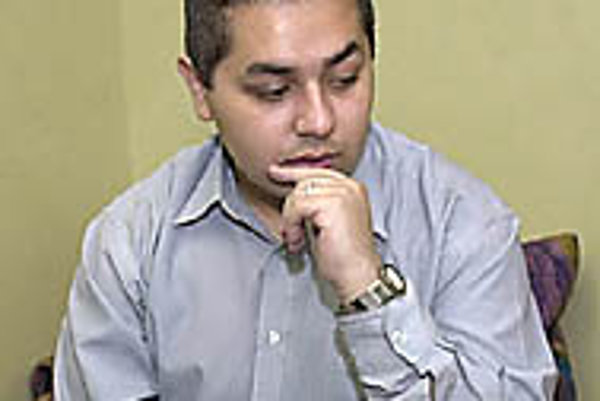 Font size:A-|A+  Comments disabled
KOŠICE: TV reporter Ivan Hriczko had just finished his first news broadcast for a Slovak TV network when a woman called the station. She asked to speak to "that darker-skinned reporter".

Eager for feedback, Hriczko jumped to the phone and introduced himself: "Hello, Ivan Hriczko speaking. How can I help you?"
The woman burst out: "Jesus, you can speak Slovak so well! Where are you from?"
"Košice," he replied.
"Yes, yes, but what's your nationality?" she pressed on.
"I'm Slovak," he responded.
The woman was not satisfied. "Yeah, fine... but what I mean is, where are your parents from?"
"They were both born in Slovakia."

There was a long pause. The woman, it now seems to Hriczko, had called intending to congratulate a foreign student on his marvellous news report, done in the reporter's non-native tongue. What she discovered, he feels, was a huge disappointment.

"So then that means that you're a gypsy, aren't you?"

Ivan Hriczko (20) is, in fact, a gypsy, a minority ethnic group which prefers to be known by its own language designation, Roma. He was born in Slovakia's second largest city, Košice. He comes from a family of musicians (he himself plays the guitar), and he says that he feels both Slovak and Roma.

For over a year, Hriczko has been working as a news reporter for the Košice-based Global television station. Those who know him from the evening news usually refer to him as 'the first Roma TV reporter in Slovakia.' And often (but not always), people acknowledge his Roma ethnicity without adding the label of disgust among ethnic Slovaks it usually accompanies, that of the 'dirty gypsy'. His carefully combed hair, neat and well-fitting clothes, calm behaviour and gentle mannner has so far, for the most part, distanced him from that stereotype.

Instead, Hriczko says, when most people first meet him they assume he is "just a dark foreigner". Yet he speaks the Roma tongue perfectly, a fact which has brought depth to his coverage of Roma issues. He is, in short, the most peculiar of Roma: straddling two cultures, but disowned by neither.

"Hriczko, more so than any other Roma, helps break down stereotypes held by the majority of Slovaks," says Michal Vašečka, a Roma issues analyst with the IVO think-tank in Bratislava. "You can hear people saying what a nice person he is, then saying what a lovely tan he has. People find it difficult to grasp that he's part of the Roma class they are so used to thinking of."

Hriczko says that he became a journalist overnight - the Centre for Independent Journalism in Bratislava organised a one-year course for Roma journalists in 1999, in which he enrolled.

"The whole idea interested me," he says. "I became attracted to the whole idea of journalism during that programme. I had never paid much attention to the media before, I had never thought I'd become a TV news reporter."

While studying, he worked at the Košice daily paper Korzár, then moved on to the local Košice public TV station Naša. After he finished his studies, he stayed with Naša for two months and then joined Global in April 2000, where he has stayed till today.

The Slovak Spectator interviewed him in Košice in late May.

The Slovak Spectator (TSS): Why did you choose TV over other media such as print or radio?

Ivan Hriczko (IH): Few Roma read newspapers. But every Roma house has a TV, a radio as well. This is natural, it's part of our basic make-up - we, the Roma, love dancing and singing, seeing people in movement.

TSS: What field do you cover?

IH: If you're asking whether I only cover one issue - the Roma issue - then the answer is no. My editor-in-chief wanted to have the first Roma reporter in Slovakia. However, he doesn't want me to deal only with the Roma issue. He wants me to deal with everything.

Obviously, I have an advantage in that I speak the Roma language. It helps me better understand and get to the bottom of Roma problems. Speaking the language and physically looking like a Roma also helps to immediately win the Roma's attention.

Hriczko has indeed won the Roma's attention, but not all of it has been positive. "A stamp of inferiority has been imposed upon the Roma nation," said IVO's Vašečka. "A typical Roma is generally thought to be a non-educated, poor person living in a marginalised group, living on the fringes of society. For that reason, if a Roma crawls out of that group, then the Roma he left behind no longer claim him as their own. They say he is no longer truly a Roma. They accuse him of trying to be white."

Hriczko says he is aware of this double-edged sword, but says that he is - and always will be - proud of his ethnicity, adding that people have to choose their own paths.

"I know that prejudice exists in Slovakia, that when a Roma attains a certain level the Roma community no longer sees him as one of their own," he says. "But it's up to the individual himself. A Roma writer once said: 'A Roma will always remain Roma'. Whether a Roma becomes a lawyer or a doctor, it's only a matter of time before he realises that being a Roma is actually good."

While Hriczko has no problems covering the Roma issue, his boss, TV Global executive director Miroslav Roganský, says that he likes his reporter to cover other areas as well. But it's not that he wants to shield Hriczko from covering the Roma because of the possibility of being called an 'Uncle Tom' within the community, it's just that he doesn't want to pigeonhole Hriczko into one area .

"Ivan is a hard-working and happy guy," says Roganský. "He's also very responsible despite what the stereotypes say about his background. He's very brave."

Roganský says that when Hriczko entered his TV office for the first time, the reporter's charisma struck him more than the colour of his skin. "When I saw him, I didn't even notice that he was a Roma. That's how I feel about him even today."

People on the street are not always so forgiving. "People will stop me and congratulate me and tell me how great it would be if other Roma were like me," Hriczko says. But then, he adds, they will sometimes turn to their companions and say: "Oh, it's just that gypsy."

"The majority of Slovaks create their opinions based on prejudice," says Vašečka. "Even though statistics say that 50% of Slovak citizens have never had a bad experience with a Roma, most of them would refuse to have a Roma in their neighbourhood."

IH: My childhood was a bit strange, since I never felt any real discrimination as a youth. Then again, maybe I just didn't recognise it. I grew up in a Košice housing estate called Mier, where only three Roma families lived. We were basically at the same level as the neighbourhood Slovaks, and I never came across the so-called 'dirty, backward' Roma. My friends were mostly non-Roma and I never had any negative experience with skinheads, even though there were many of them there.

When I grew older, however, when I was 15 or 16, I was once not allowed to enter a certain disco-bar. All my friends were allowed, but I wasn't. This hurt me a lot, and I started wondering why it had happened. I found the answer at the age of 17, when I first went to the housing-estate Lunik IX [a well-known Roma ghetto in Košice]. There I was introduced to the Roma problem. I realised how difficult it was, the relationship between the Roma and ethnic Slovaks.

TSS: Did you think at that time that you would like to work towards a solution?

IH: I became very interested in the Roma issue after I came to the journalism course in Bratislava. I found out that there are non-governmental institutions [dealing with the Roma issue]. But I also realised how inefficient they were at getting anything done, so I decided to do something else.

Today I represent the Roma nationality in Slovakia in a manner where people can see me. People see that the Roma are capable of changing and adapting to the current situation. Moreover, I don't promote just the Slovak Republic, I also promote the Roma nation.

TSS: What are your plans?

IH: I would like to become more active in solving the Roma issue, but only after I am older and wiser. My ultimate ambition is to become a Roma politician.

TSS: The leader of a pure Roma party?

IH: I don't care what kind of party it is. I just want to be there and help to solve problems directly. I think that the Roma should be as politically influential in this country as the Hungarians are today. But to do this, it means we can't expect others to solve our problems for us.

TSS: Are you happy that you are a Roma?

IH: I'm very happy that I am a Roma. Being a Roma makes me happy. At least I can say I was the first Roma reporter. And while it's not easy being Roma, it's also not easy to be a young man of any ethnicity in Slovakia.