PLAVECKÝ ŠTVRTOK: What began as a spat between two neighbourhood Roma children in western Slovakia's Plavecký Štvrtok has escalated into a crisis dividing the town's 700-strong Roma community. The conflict, lasting several weeks now, has left 31 residents injured, 22 people imprisoned and several Roma dwellings burnt to the ground.
An attempt June 5 to bring the warring Roma factions together and end the violence dissolved in chaos with one clan leader defending threats by a Roma man to burn his children if a solution wasn't found. Town leaders and police expressed dismay with the conflict, which they said they were powerless to solve until peace returned to the community. 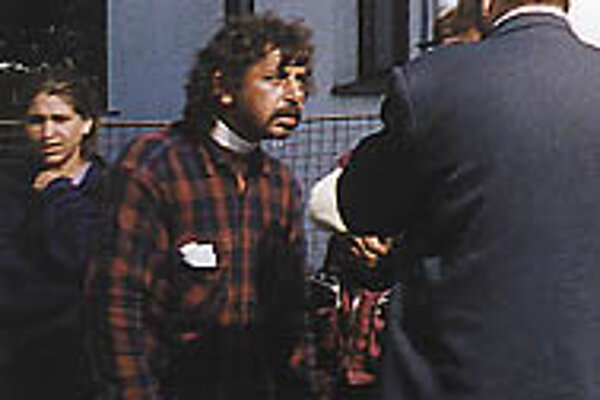 An attempt June 5 to bring the warring Roma factions together and end the violence dissolved in chaos with one clan leader defending threats by a Roma man to burn his children if a solution wasn't found. Town leaders and police expressed dismay with the conflict, which they said they were powerless to solve until peace returned to the community.

The conflict has many roots, none of which are easily addressed, said Roma analysts. Among them are segregation, unemployment and the threat of land dispossession - facts of life for many of Slovakia's estimated 450,000 Roma.

Plavecký Štvrtok's Roma community suffers from nearly 100% unemployment, with idle residents frequently committing crimes against each other with no police intervention to restore order.

"These people are unemployed, they have nothing to do," said Michal Vašečka, a Roma analyst with the Institute for Public Affairs think-tank in Bratislava. "What often happens is that they organise clans which fight for power within the settlement."

Adding to the mix is the fact that the Roma community in Plavecký Štvrtok is actually two groups: one which has lived there for over a century, and another which arrived in the last 20 years from other sites in western Slovakia.

Vašečka explained that a lack of jobs had exacerbated natural differences between the two Roma groups. The old-timers, he explained, had learned to coexist with the white Slovak community, a relationship they felt was threatened by the newcomers.

What is more, both Roma groups now face expulsion from the land they have built squatter buildings on, as a time limit on land 'restitution' - restoring land expropriated by the former communist regime in 1948 to its original owners - has recently expired. If the destitute Roma are unable to buy the land their houses sit on from its owners, they will be forced to move.

Given the complexity of the issues the Roma face, and the tensions joblessness and uncertain accommodation prospects cause, few expect that the cauldron of emotions that have erupted in Plavecký Štvrtok will be soon calmed.

The June 5 meeting included a broad spectrum of parties who have an interest in restoring order - members of the Roma Initiative political party (RIS), the town mayor, the local police chief and leaders of the warring Roma factions.

It began peacefully enough, with the Roma adversaries arriving late, and state-appointed Malacky District head Milan Vaškor saying in their absence that the district would help the Roma purchase the land they now live on if peace was restored.

Then followed a long discussion between the white Slovak officials and the RIS representatives as to whether the use of the term 'Roma' was discriminatory. The RIS argued that the Roma should simply be called 'Slovaks'.

Feelings were stirred an hour later, when the two Roma factions arrived. Jozef Polakovič and Jozef Zeman, leading the Roma newcomers group, accused the majority Roma group of persecuting the 16 Roma families they represented to the point that they would likely seek asylum in a western country. "I think I could live a better life among whites than among these Gypsies," he said.

Majority Roma group leaders František Jankovič and Marianka Biháriová responded that Polakovič himself was the main agitator in the conflict, a claim that was backed by Plavecký Štvrtok Mayor Margita Fischerová.

"Everyone is free. If you don't like living here, you can buy a flat somewhere else and move away," she told Polakovič. "But don't stick a knife to my neck and demand that I do something!"

The RIS's Ladislav Fizik then reacted angrily to reports that Polakovič had threatened to burn his children in protest of the conflict and of their living conditions. "You made me very angry, Mr. Polakovič," Fizik said while rising from his seat. Polakovič responded that he himself had not issued the threat, but added: "You should see the house of the people who did say it. They have to sleep outside."

After two hours of haggling, Fizik asked Polakovič to sign a petition calling for an end to the violence. The latter agreed, but then told The Slovak Spectator outside the Town Hall that he would do no such thing.

"By signing this petition, nothing will be solved, we'd still be attacked by the other Roma," he said. "I will ask my people what to do, and if they say yes, I'll keep to the agreement. If no, then I won't - and I believe they will not approve our signing it."

As he spoke, a group of some 30 Roma milled around waiting for a chance to tell their stories (the Town Hall's doors had been locked, preventing them from entering). Upon learning that the meeting had been concluded (with another scheduled for June 19), tempers flared. Women whose husbands have been imprisoned demanded their release, while several others jockeyed for space around a Slovak Television camera crew to convey their opinions.

One man, wearing a white bandage around his neck, yelled at Fizik, removing a dressing on his neck to reveal a large suture. He had been attacked in the recent altercations, he bellowed, and wanted his living conditions improved.

Picking up the pieces

In the aftermath of the failed summit, observers struggled to predict the future. Columbus Igboanusi, the head of the League of Human Rights Advocates who has been working with the Plavecký Štvrtok Roma since 1995, the past month as an intermediary between the two sides, said that Polakovič would likely reject any proffered resolutions, as the violence had brought media attention which in turn had justified his position.

"He wants the media coverage to continue for personal benefits [such as justifying possible claims for asylum in a western country, or for Slovak government assistance in relocating - ed. note]" Ignoanusi said. "He's not thinking about the community as a whole."

Igboanusi had little faith Polakovič would sign the petition. "He'll tell his people not to sign it," he said. "I'll have to tell the minority group to get a new leader to speak on their behalf. We have good intentions to solve this problem, but he's imposing his own will on the situation."

Regardless of individual motives, however, Igboanusi said the intractable conflict above all was evidence of the depth of despair among the Slovak Roma.

"These people are isolated, they have no job opportunities, they live in terrible conditions, they face discrimination by white society," he said.