All Slovak banks great and small

Following a failure to sell Slovakia's smallest bank, Banka Slovakia, in a tender earlier this year, the state has found three entities ready to step into the Slovak banking sector.
Brokerage house Slávia Capital, J & T Finance Group, and stock broker 1. Paroplavebná have confirmed that they are interested in buying the 60% share in the finance house on offer from the state.
However, two of the interested parties, Slávia and J & T Finance, the latter of which backed out of a tender for the bank last year, have made it clear that they have more interest in the licence available than the future of the finance house. 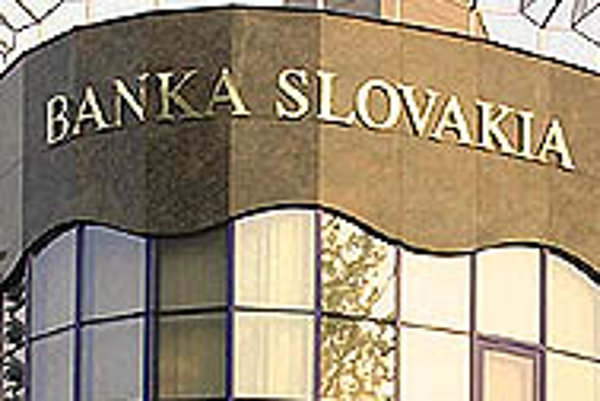 Brokerage house Slávia Capital, J & T Finance Group, and stock broker 1. Paroplavebná have confirmed that they are interested in buying the 60% share in the finance house on offer from the state.

However, two of the interested parties, Slávia and J & T Finance, the latter of which backed out of a tender for the bank last year, have made it clear that they have more interest in the licence available than the future of the finance house.

"Of course, the licence is of great importance to us. We are already quite active in the financial market and we are sure that there are a number of synergies that we could create if we were to have a banking licence," said Martin Kabát, treasury director at Slávia Capital.

"We already have a lot of activities going [which would be supported by our acquisition of a licence] and we feel a lot of our clients would support our buying the bank."

The figures are encouraging in comparison with the other three state banks sold or due to be sold off in the next few months. The state forked out over 100 billion crowns between 1999 and 2000 to clean up Investičná a Rozvojová banka (IRB), Všeobecná úverova banka (VÚB) and Slovenská sporiteľňa (SLSP), which was sold at the end of last year.

Despite its relative financial health, Banka Slovakia has struggled to attract strategic buyers.

On February 20 the National Property Fund (FNM), under the recommendation of a ministerial commission for the privatisation of Banka Slovakia, declared an initial tender for the bank, launched in July last year, unsuccessful.

The FNM immediately prepared a second tender, this time attracting the likes of J & T.

"One year ago we were looking around, but we thought at the time that we had many other pressing things to take into account, and so we skipped it then. But our interest has returned," said Tomáš Martinec, partner at J & T Finance in Prague.

The Czech investment bank has said that it views Banka Slovakia's banking licence as an easy way to expand its operations in both countries - J & T has an active branch in Slovakia. Slávia Capital also sees the same opportunity to build on its own activities - the brokerage house has already been a key player in the advisory team for many high-profile privatisations, such as that of state telecom monopoly Slovenské telekomunikácie (ST).

However, the ultimate success of the second tender will depend, Slávia Capital says, on the state.

A consortium of Czech insurance company Česká Pojišťovna and Slovak firm Hanco was the sole investor to show an interest in Banka Slovakia in the failed tender last year, withdrawing from talks with the FNM state privatisation agency after failing to reach agreement on the terms of the contract.

Hanco representatives said at the time that it was only interested in purchasing the bank's assets and liabilities, and wanted a 100% share in the bank, not the 60% on offer from the FNM. The group maintains that the price it bid for the bank, still undisclosed, was not a stumbling block in the deal.

"We'd like to think that this time round the tender will be successful," said Slávia's Kabát. "I don't know the specifics of why the deal failed 12 months ago, but there seems to have been a failure in the final conditions of the sale. This time it's all up to the FNM. If the state doesn't want a certain group involved then they probably won't let them get through [the bidding process]," he added.

Still upset over past events

Slávia is still smarting after its interest in the then-ailing small finance house Priemyselná banka was, it claims, rejected by the state. Slávia announced in autumn 1999 that it was interested in acquiring Priemyselná after it ran into financial problems. However, the then-state-controlled SLSP ultimately bought the bank for one crown, much to the chagrin of the finance group.

"Basically, SLSP took over the bank without shareholder approval. We hope this won't happen again in the case of Banka Slovakia, but who knows?" said Kabát.

While the two potential bidders have been keen to stress that they are interested in the licences, many analysts feel that the bank, while having only a 0.52% percent market share by balance sheet, is still an attractive proposition.

"The central bank feels as if it doesn't want to give out any more new licences [because the Slovak banking market is already saturated], and while it is likely that whoever buys it is only looking for a licence to get on the market, Banka Slovakia has turned a profit regularly and in this sense has been successful," said Mario Blaščák, analyst at Ľudová banka.

"And I don't think that it would make any sense for the new owners of Banka Slovakia to just grab the licence and close down all the branches and bank operations," he continued. "It would be bad PR and a bad signal of their intentions in the Slovak banking sector. At least in the short term it would be better to keep things open, and then work on the bank's network. Only in a period of transformation would anyone want to start closing branches."

Banka Slovakia announced in March this year that it would look to increase the six branches that it has operating in the country, expanding to open more branches in eastern Slovakia, as well as a second branch in Bratislava.

The three interested parties are waiting for a central bank announcement on when they can perform a due diligence on the bank. Until then, they say, the final price they can offer - which analysts have suggested could be as much as 600 million crowns, based on the bank's one billion crown base capital - is still under wraps.

"We'll wait until we can do a due diligence. Until then all we can say is the bank is worth our interest," said J & T's Martinec.