As the government's proposed fight against corruption continues to let announced deadlines pass, NGO representatives involved in the plan are getting restless, claiming that bureaucatic delays are endangering the project.
Their warnings have been driven home by recent cases of venality and fraud in state bodies. Two Slovak police officials were accused last week of corruption, and are now under police investigation. According to a November 26 Slovak Television (STV) report, Miroslav N., head of the Pezinok Investigator's Office (Bratislava region), has been accused of accepting a 35,000 crown ($690) bribe to derail an investigation against a suspected criminal. 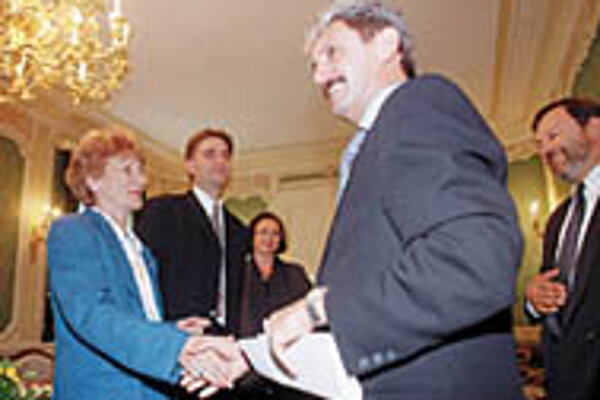 Font size:A-|A+  Comments disabled
As the government's proposed fight against corruption continues to let announced deadlines pass, NGO representatives involved in the plan are getting restless, claiming that bureaucatic delays are endangering the project.

Their warnings have been driven home by recent cases of venality and fraud in state bodies. Two Slovak police officials were accused last week of corruption, and are now under police investigation. According to a November 26 Slovak Television (STV) report, Miroslav N., head of the Pezinok Investigator's Office (Bratislava region), has been accused of accepting a 35,000 crown ($690) bribe to derail an investigation against a suspected criminal.

Also, Peter Ch., head of the Bratislava police department in charge of road transport, has been accused of writing a fake car accident report to fraudulently extract an insurance settlement of some 300,000 crowns.

Such examples of public sector corruption were expected to be fought, and ultimately eliminated, by the government's National Programme to Fight Corruption, announced February 29 by Prime Minister Mikuláš Dzurinda. However, after several delays and missed deadlines, the plan today remains far from fruition.

While Prime Minister Mikuláš Dzurinda promised at a February press conference announcing the scheme that action plans for individual ministries would be ready by the end of June, in an August interview with The Slovak Spectator he said that they would "be ready in September, and the overall action plan on October 13."

But the deadlines have not been met, and NGO representatives involved in the project say that unless the government takes immediate action, the plan will remain a dead letter.

Warning that the plan is in danger of not reaching completion within the current government's term (which lasts until 2002), observers compared the situation to the fate of the 'Clean Hands' programme declared in 1995, which was criticised for never having taken clear or decisive steps to fight state-sector corruption.

"We should bear in mind that we submitted our plan to the government in November 1999," said Daniela Zemanovičová, programme director at the independent Centre for Economic Development (CPHR) which, together with the anti-corruption watch dog Transparency International Slovakia, has cooperated with the Dzurinda government on the anti-corruption strategy.

"We've lost an entire year because of bureaucratic procedures," she continued. "As a result, all we have in our hands at the moment are the individual ministerial action plans [which were approved by the cabinet on November 22, and include over 1,200 tasks for individual ministries and their subordinate institutions - ed. note]. And these plans came in past deadline - which was [originally] the end of June."

Zemanovičová, who sits on the steering board of the government programme, added that not only had the ministries taken far longer than expected to produce their action plans, the submitted versions had also proven inadequate, lacking specific details of the proposed fight against corruption. Instead, she said, the plans proffer sweeping and often vague instructions to individual state administration organs under the ministries' supervision.

"They're often very broad guidelines which the ministries and their subordinate institutions should already have been following," she said. "We are concerned that the whole plan will remain nothing more than talk with no real substance."

Government representatives, however, responded that all official deadlines had, in fact, been observed and that the programme has already brought some positive results.

"I admit that our original idea was more optimistic, but we haven't missed any official deadline," said Michal Ivantyšin, coordinator of the anti-corruption steering committee and head of communications at the government office.

According to Ivantyšin, all ministries had turned in their action plans by the June 30 deadline, but since they had proven insufficient or incomplete, they had therefore been "returned to the ministries for amendments".

"We received the more specific action plans on September 4," he continued. "And these were approved by the cabinet. Now we have concrete plans in our hands, and we know exactly what to do next."

But frustrated NGO representatives involved in the anti-corruption project cast doubt on the government's ability, and willingness, to proceed in the right direction. Helena Woleková, of the Social Policy Analysis Centre NGO, said that the action plans were incompetent and displayed a lack of political will to fight corruption aggressively.

"For example, the plans have ministries pledging they will obey certain laws in the future, laws which they should have been obeying anyway," Woleková said. "Many of the ministries' plans haven't convinced us that they are serious in waging this fight against corruption at all."

Similar doubts were expressed on the streets of the nation's capital. "I was very happy when I first heard about the corruption fight," said university student Ján Štubna in Bratislava. "But February was a long time ago, and I still haven't seen much happen. I don't understand what they are trying to achieve with this plan - corruption has certainly not become any less common in Slovakia."

Ivantyšin said that such criticism proved that people didn't understand the government's objectives. "Those who expect to see results in the analysis stage of the programme must have been disappointed," he said, explaining that the initial phase was aimed only at "analysing" corruption in Slovakia.

"But we're now past this phase. I promise that you will soon see more concrete results, and that the whole process will become more dynamic," he said. "We want to meet regularly every six months to evaluate how tasks were tackled, and then to set new objectives."

He added that the anti-corruption plan had already scored points when parliament approved the Freedom of Access to Information law in May, and in September when the Justice Ministry launched its Business Register web site, which lists all Slovak companies and their ownership structures. "All people working on the steering committee take their tasks very seriously," Ivantyšin stressed.

But for Zemanovičová, the programme has so far been long on promises and short on results. "The successful implementation of the anti-corruption campaign will not be reached by empty declarations of support by top state representatives," she said.

"Concrete steps must be taken soon, and they must be backed by political will to reform other problematic sectors like the judiciary and health care. If these reforms don't happen soon, the whole plan to fight corruption will never take effect."