Deputy Premier for Economy Ivan Mikloš and Finance Minister Brigita Schmögnerová were desperately trying to broker a series of last minute agreements as The Slovak Spectator went to press November 30 to break a stalemate with members of parliament over the government's 2001 budget.
Only days before parliament was due to start debating the budget, many MPs balked at the cabinet-approved proposal, proposing changes that could add many billions of crowns to a 37.8 billion crown ($745 million) deficit that only just met International Monetary Fund (IMF) recommended guidelines of 4% of GDP. 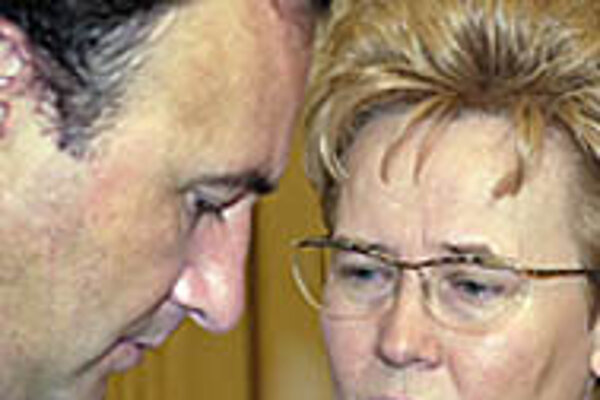 Font size:A-|A+  Comments disabled
Deputy Premier for Economy Ivan Mikloš and Finance Minister Brigita Schmögnerová were desperately trying to broker a series of last minute agreements as The Slovak Spectator went to press November 30 to break a stalemate with members of parliament over the government's 2001 budget.

Only days before parliament was due to start debating the budget, many MPs balked at the cabinet-approved proposal, proposing changes that could add many billions of crowns to a 37.8 billion crown ($745 million) deficit that only just met International Monetary Fund (IMF) recommended guidelines of 4% of GDP.

However, while ministers resolutely defended the need to keep within the budget deficit, some media reports suggested that a deal within the coalition council - a senior decision making body within the government - had guaranteed support for one of the most controversial parts of the budget, a rise in social insurance payments from 27.5% to 28%. Employers are required to pay the dues as calculated from employee wages on top of what they fork out in salaries.

Analysts warned that if the media reports were true, it meant the cabinet may have opted for a "quick-fix" option that, while politically popular in the short-term, would in the longer term damage the corporate sector.

"The [rise in] social security payments, if supported, will bring in revenues, but it will be detrimental to business. Raising these payments may help in the short-term with budget revenues, but it raises the costs of employment," said Ján Tóth, analyst at ING Barings. "An employer now may think twice about taking on someone new. The higher payments see an increase in costs, but only the government sees a benefit from it," he added.

"One of Slovakia's historical economic problems has been high unemployment. An average employment rate of 13% in the last two years even with economic growth shows that there must be something structurally wrong, and that lies in the high cost of labour, the high contributions that have to be paid," added Tóth.

Neither the Finance Ministry or the Office of the Deputy Premier for Economy would confirm that such a decision had been reached by the council.

"There are still negotiations going on about the budget. We need coalition support and we need to see if all coalition parties will support the budget, it's all down to that question," said Peter Švec, spokesman for the Finance Ministry.

"However, I hope that whatever the result of the discussions is, it won't be too far from our original budget deficit estimate," he added.

Vladimir Tvaroška, advisor to Deputy Prime Minister for Economy Ivan Mikloš, said that he was unaware of the agreement, but added that even if one had been reached, the rise of 0.5% was "nothing". He pointed out that next year the import surcharge would be eliminated, saving companies 10 billion crowns based on this year's surcharge rates of three to five percent.

"Anyone who says that this increase will hurt business should compare the figure of 10 billion that the government will not receive to the one billion that it will get from putting up the social insurance payments. We don't like to put up these payments, but it's just moving it up 0.5% to a round figure. It really is nothing," the advisor said.

The political manoeuvring to secure full coalition support for the budget came amid mounting pressure for the government to keep the deficit below 4% of GDP. Squeezing in at 3.9%, the 37.8 billion crown gap in the state coffers will, experts believe, carry inherent risks, especially with the government's projected unemployment figure of 16.3% for next year.

"The social insurance company [Socialna poisťovňa, which makes welfare payments - ed.note] sees the figure for unemployment next year a bit differently - at 18.8%. That would put a big strain on government expenditures and the budget," said Vladimír Kňažko, analyst at economic think-tank MESA 10. "This could turn out to be a big problem for the government."

Kňažko added that the government was also taking a risk in including privatisation revenues in its budget. "No one knows exactly what will happen with the privatisations, when exactly they will conclude and what revenues will come from them," he said. The government plans to sell of some major state banks and energy utility companies in the new year.

The government's self-trumpeted public works scheme, which has wiped thousands off the list of unemployed, appears to be its main hope of keeping unemployment, and hence its welfare payments, within set levels. Money has been allocated for the projects, and with elections in 2002, the political will to keep the schemes going is likely to see employment hover around the government's prognosis, said Tóth.

"The government is counting on the public works scheme and there is both the money and the political will, with the 2002 elections in mind, to keep these schemes going throughout this year," he said.

The importance of sticking to deficit targets has been reiterated by the government, international organisations such as the IMF and World Bank, and independent experts. As coalition leaders sought to sway party members to supporting the budget with its proposed deficit level, Minister Schmögnerová and Deputy Prime Minister Mikloš were joined by Prime Minister Mikuláš Dzurinda in their refusal to countenance the possibility of exceeding the deficit or allowing 2001 to start with a provisional budget in place.

"We cannot exceed the proposed deficit. In so doing we could threaten all the [economic] progress we have managed to make in the last two years," said Mikloš.

The government has also warned that investment, and the health of the economy itself, lies in keeping to the planned deficit.

"If the deficit is too high it will be bad, very bad. Interest rates may even go up and there would be problems for everyone, not just investors, but domestic increases. And if the deficit were to shoot very high [above the proposed level] that might even start to affect the currency itself," said Tvaroška.

The Finance Ministry's Švec added: "I wouldn't even like to speculate what may happen if an agreement is not reached."

MESA 10's Kňažko was less dramatic in his assessment of the effects of the deficit, but still warned that overshooting the 38.7 billion crown mark would sully investor confidence. "Keeping to the budget deficit is important to investors. The government has to show that it can keep to its plans and keep the confidence of anyone wanting to invest," said Kňažko.