'We want France as a Godfather,' 'We want a strategic friendship with France': these two slogans were used by the government of former Prime Minister Vladimír Mečiar before his official visit to France in April 1997. The Slovak leader hoped to gain an important political ally in the French, at a time when other Western states were offering only censure.
But although the former Mečiar-led government signed several lucrative contracts with French firms at the time of his visit, the hopes of the delegation were largely frustrated, with French Prime Minister Jacques Chirac not supporting Slovakia's bid to join the first group of EU accession countries. 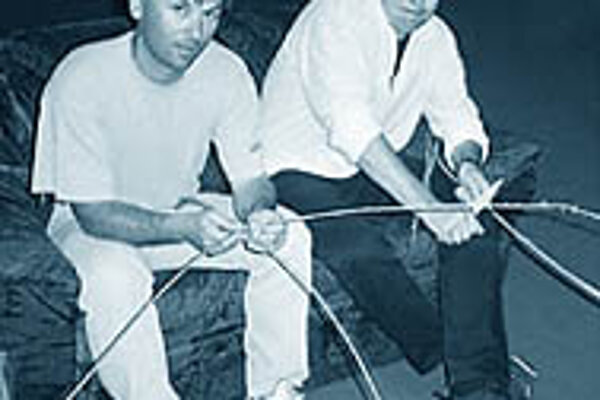 Font size:A-|A+  Comments disabled
'We want France as a Godfather,' 'We want a strategic friendship with France': these two slogans were used by the government of former Prime Minister Vladimír Mečiar before his official visit to France in April 1997. The Slovak leader hoped to gain an important political ally in the French, at a time when other Western states were offering only censure.

But although the former Mečiar-led government signed several lucrative contracts with French firms at the time of his visit, the hopes of the delegation were largely frustrated, with French Prime Minister Jacques Chirac not supporting Slovakia's bid to join the first group of EU accession countries.

"I think Mečiar miscalculated," said Martin Bruncko, director of foreign policy studies at the Institute for Public Affairs (IVO) in Bratislava. "He thought that the French would be more willing to overlook moral objections given economic incentives. He thought he could buy France, but he was wrong."

Nevertheless, while Slovakia under Mečiar didn't exactly find a friend in France, it didn't make an enemy either. Essentially, France then played the same role in the country as it does today: an important source of foreign investment, and an ally determined to see the country join Europe - with one eye on its own interests.

"The French have always been willing to give new countries more room to grow, which is why we were less critical of Mečiar [than were other western countries]," French Ambassador Georges Vaugier told The Slovak Spectator, explaining his country's comparatively friendly relations with the ostracised leader. "At the time, Slovakia was offering business opportunities, and some French businessmen said, 'why don't we use them?'"

Most business relationships between France and Slovakia, however, have been formed in the same manner - investment - as those involving other foreign countries. During 1999 and the first half of this year, France was the seventh largest foreign investor into Slovakia. According to the French Embassy, between 150 and 180 French firms do business in Slovakia today, and around 200 French people call the country their home

Those numbers are steadily increasing. French officials say that even though much has been made of Mečiar's effort to forge a relationship with France, French investment in Slovakia has picked up since elections in 1998 brought a new, Mečiar-less government.

"Investment has never been as big as it is now," said Dominique Lapierre, business and economic advisor at the French economic mission in Bratislava. "The new government is doing an excellent job to reform legislation and build trust with the business community. And although French numbers aren't as high as those of some other foreign investors, we have high visibility."

High-profile investments this year from France include France Telecom's purchase of a majority stake in mobile phone company Globtel, the opening of new shopping malls by the French firm Carrefour, and plans by auto parts maker Plastic Omnium to open a plant in Slovakia.

Lapierre added that the French presence would increase even more as what he called 'service type industries' became more important. "The gas sector, the water distribution sector, the power sector - in all these areas, France has particularly strong interests. As these industries become privatised, French companies will be a good fit because in France they have always kept an even balance between social and business concerns."

For their part, members of Slovakia's small yet tightly-knit French community say that one of the main bonuses - both personally and professionally - for French businessmen coming to Slovakia are Slovak people.

"French people feel at home with Slovaks because in both our cultures relationships are important," said Jacky Puiroux, director of Schneider electric, a medium-sized firm. Puiroux has been in Bratislava for four years. "Slovak people have a very high level of education. They are very hard working, very adaptive. It is remarkable considering that they have been faced in recent years with almost constant change. I'm not sure if French people could handle such constant change. We tend to be more conservative."

While business relations continue to develop between France and Slovakia, and French living here are all smiles, politics between the two countries have taken on another interesting wrinkle. Some experts say that the current Slovak government is alienating France by focusing too much on its relations with the US.

Earlier this year, for example, France delayed Slovakia's entry into the OECD after Slovakia adopted a resolution regarding broadcast legislation that had been pushed by the US. According to experts, Slovakia had little interest in the legislation, but instead chose to accept the US demands at the expense of alienating France.

"When two countries such as France and the United States clash and you embrace one, you put your relationship with the other in jeopardy," said Bruncko. "Slovakia is still the only country in central or eastern Europe not to have been visited by a French president or prime minister. Current Slovak foreign policy might be so pro-American that it is estranging France."

But French officials here insist that their interest in the region is deeply rooted, and that the relationship between the countries remains strong. "We have always supported Slovakia. France heavily supported the first Czechoslovak Republic [founded in 1918], and France was the first country to open to Slovakia when it gained its independence," said Vaugier.