Battle over Tatras begins to heat up

Tempers flared in The Hague at the United Nations conference on climate change in mid-November as the European Union and the US failed to reach a compromise on the latter's role in reducing greenhouse effect gas emissions.
While the international community focused on The Netherlands, an environmental battle was also being waged in Slovakia, a fight which has gone on for years now. The battle concerns the country's favourite mountains, the High Tatras (Vysoké Tatry). 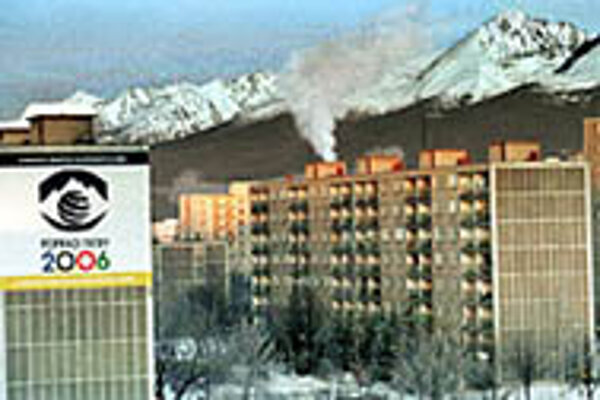 Font size:A-|A+  Comments disabled
Tempers flared in The Hague at the United Nations conference on climate change in mid-November as the European Union and the US failed to reach a compromise on the latter's role in reducing greenhouse effect gas emissions.

While the international community focused on The Netherlands, an environmental battle was also being waged in Slovakia, a fight which has gone on for years now. The battle concerns the country's favourite mountains, the High Tatras (Vysoké Tatry).

Two bodies embracing two different philosophies, say insiders and environmental activists, are fighting for the chance to dictate how the Tatras will be managed. On one side are environmental NGO's and the Environment Ministry, which favour nature preservation above all else. On the other is the Agriculture Ministry, which is accused by its opponents of placing profit above the mountains' natural environment.

While emotions have not yet run high enough to earn a major player in the Tatras debate a pie in the face - as Frank Loy, the US's diplomat at the Hague conference, fell victim to - those involved say the matter is reaching critical mass and that the future of the Tatras is endangered by increased logging, excessive tourism, and destructive development of infrastructure.

"National parks are a region for silence, they're for hiking, skiing, sitting, breathing," said Peter Straka, head of the Environment Ministry's Nature Protection Division. "We must protect the Tatras. We don't need to increase logging, development, or hunting."

"Go to Štrbské Pleso [in the High Tatras]," he continued. "They have plastic giraffe slides and big speakers with loud music. This is a national park? If you want that stuff, put it in [the nearby towns of] Liptovský Mikuláš or Poprad, but don't put it in the heart of the mountains. In national parks, a priority must be placed on nature conservation.

"This is just a small natural area and it can't be a big tourist resort like in Switzerland or Austria. The park is open for recreation, but not open for mass change."

The Tatras National Park (TANAP) today falls under the jurisdiction of the Agriculture Ministry's Forest Management section, a fact which does not sit well with the Environment Ministry, which wants both a say in the park's future and state money budgeted for its management.

The two ministries have a relationship Straka described as a "sickness", which began immediately after the formation of independent Slovakia. According to Straka, although the Agriculture Ministry was appointed official regulator of the land, the two ministries then reached a "gentleman's agreement" that TANAP would be jointly managed by both parties.

"There was a 'gentleman's agreement' between the ministries that TANAP would fall under the Agriculture Ministry's regulation," he said, "but that both ministries would manage the park."

Under the agreement, the Agriculture Ministry was responsible for 'forest management' (a term which covers what is being done by whom with the land in accordance to the forest management plan, which sets rules for forest management), while the Environment Ministry looked after 'nature conservation'.

Since 1995, the state budget has anually allocated 65 million Slovak crowns ($1.3 million) for the management of TANAP. While the sum initially went to the park itself, the money has since been directed to the Agriculture Ministry's Forest Management Section, a move made possible, Straka said, by the fact that the Environment Ministry was only involved in its management through the unofficial agreement.

The Agriculture Ministry, who said they were unable to respond to other questions from The Slovak Spectator, countered by saying that the Environment Ministry's protests against them had strictly monetary roots.

"The quarrel among the ministries has a purely economic basis," said Juraj Balkovič from the Agriculture Ministry's Forest Management section. "They need money for their activities and they want to get the money from us. They always want it from us."

He added: "But there is no problem between the two ministries in terms of how we preserve or manage the forests, the only problem is economical."

Straka disagreed, saying that the differences were ones of fundamental philosophy. "The Agriculture Minister is about development, and the Environment Ministry is about preservation and conservation."

But Michal Kravčík, an activist from the Košice-based environmental NGO Ludia a voda (People and Water), agreed with Balkovič that money was the main problem and added that laws should be set up to settle the dispute.

"We need to create a system of laws for our national parks which eliminates this conflict of interest between two bodies," he said. "It's a ridiculous situation. They are fighting like dogs trying to catch the money... my mind goes numb when I think of this."

A recently proposed bill by the Agriculture Ministry would settle the issue, but naturally has been met with resentment in the Environment Ministry. While the law would settle the management of TANAP, Straka said it would push his ministry out of all decision making.

"The main goal of the law is to take the Environment Ministry completely out of the management of TANAP," he said.

Were that to happen, Kravčik said, the development ambitions of the Agriculture Ministry would win out over the preservation of the park. What little preservation concerns were being adhered to would be lost without the Environment Ministry, he added.

Viktor Beránek, Tatras resident and former owner of the famous Chata Rysy (which was last year demolished by an avalanche), also voiced his support of the Environment Ministry's focus on preservation, saying that the Tatras needed no additional build-up.

"The Tatras don't need new hotels and infrasutructure," he said. "The Environment Ministry is doing well concerning the preservation of the Tatras and I support their remaining in charge of preservation."

But it might not be given the chance, said Kravčík. "The Agriculture Ministry is trying to push the Environment Ministry out. They just want things like the Olympics [Slovakia bid unsuccesfully for the 2006 Olympic Winter Games - ed. note] and all the money it would bring. People don't understand what's going on, at least 95% of the population has no idea."

The Environment Ministry's Straka hopes that people will soon get his ministry's message - that the High Tatras should be preserved as it is today rather than milked for the cash it could potentially bring.