PM shaken by departure of KDH

Slovakia's ruling coalition as of last Sunday has five, rather than four members. The decision of the Christian Democrats, until now a bloc within Prime Minister Mikuláš Dzurinda's Slovak Democratic Coalition (SDK) party, to leave the SDK parliamentary caucus and set up on its own left a sword of Damocles hanging not only over the stability of the cabinet but also the position of Dzurinda himself.
The irony is that Dzurinda had just days before the Christian Democrat (KDH) decision formally launched his own new party, the Slovak Democratic and Christian Union (SDKÚ). At 13:00 on Sunday November 19, the prime minister had then appeared on a television talk show with a calm smile, claiming that his relations with the KDH continued to be "close and correct", and that the establishment of the SDKÚ did not in any way weaken the integrity of the SDK. 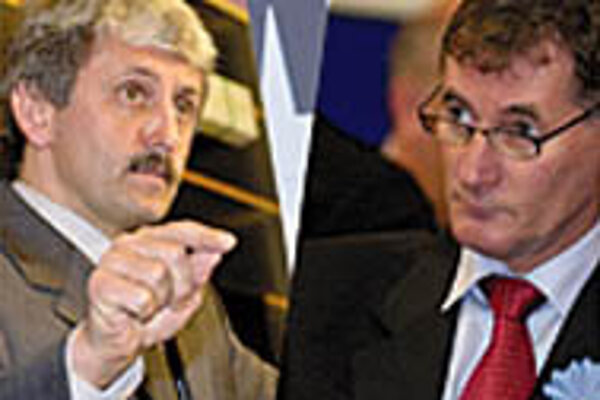 Font size:A-|A+  Comments disabled
Slovakia's ruling coalition as of last Sunday has five, rather than four members. The decision of the Christian Democrats, until now a bloc within Prime Minister Mikuláš Dzurinda's Slovak Democratic Coalition (SDK) party, to leave the SDK parliamentary caucus and set up on its own left a sword of Damocles hanging not only over the stability of the cabinet but also the position of Dzurinda himself.

The irony is that Dzurinda had just days before the Christian Democrat (KDH) decision formally launched his own new party, the Slovak Democratic and Christian Union (SDKÚ). At 13:00 on Sunday November 19, the prime minister had then appeared on a television talk show with a calm smile, claiming that his relations with the KDH continued to be "close and correct", and that the establishment of the SDKÚ did not in any way weaken the integrity of the SDK.

But at 15:00 that afternoon, nine members of parliament representing the KDH at an impromptu press conference donned soccer jerseys bearing the party's logo, and announced to a stunned audience that they were leaving the SDK.

"We decided to form our own parliamentary caucus in reaction to the formation of the SDKÚ," said KDH chairman Pavol Hrušovský.

The weekend's events thickened rather than thinned Slovakia's political fog. The only thing that is reasonably clear is that with the cautious support of other coalition parties and the enthusiastic support of the two opposition parties, the KDH will receive the 76 votes it needs in the 150 seat chamber to see its caucus established. The only dissenting voices have been Dzurinda and his SDKÚ team.

But as relations within the SDK hit an all-time low, it remains unclear how the KDH defection will affect the prime minister's position; having headed the strongest government party (42 parliamentary seats) following the 1998 election, Dzurinda now has the clear support of only 19 SDK members who have signed up to his SDKÚ party.

And with vital political and economic decisions to be taken in the next six months, it is still an open question as to how the new balance of power within the coalition will affect the reform process.

Welcome to the club

The KDH decision brought immediate reactions from the SDK's coalition partners. The Party for Civic Understanding (SOP), the Hungarian Coalition Party (SMK) and the socialist Party of the Democratic Left (SDĽ) declared on November 20 that they would not oppose the Christian Democrats, with SDĽ leader Jozef Migaš actually promising the support of all 22 of his party's MPs.

This show of solidarity may have arisen from hidden political motives. Grigorij Mesežnikov, head of the Bratislava think tank the Institute for Public Affairs (IVO), said he thought the SDĽ particularly could profit from seeing Dzurinda's influence curtailed.

"Dzurinda's position may be weakened by this reduction of the SDK caucus, which in turn would create space for the SDĽ to push its own demands, because the SDĽ would automatically become the most powerful coalition party," the analyst said.

The prime minister, significantly, was the only politician to oppose the KDH initiative, recommending that other blocs within the SDK refuse to support the new caucus. Dzurinda called the KDH action "a one-sided step which doesn't lead to stability. Given the fact that voters gave their mandate to the SDK [and not the KDH], I disagree with this step as politically irresponsible."

But the PM's reaction drew anger from the KDH and warnings from analysts. "Dzurinda crossed a certain line, which has only complicated relations between him and the KDH," said Mesežnikov. "It was too hasty and emotional."

Nor do the remaining SDK factions seem likely to heed the PM's advice, with 12 SDK deputies threatening November 20 to follow the KDH out unless Dzurinda clarified the status of his SDKÚ.

The chaos could not, perhaps, have come at a worse time for the government. Having escaped relatively unscathed from a November 11 referendum on early elections, in which only 20% of voters participated, the coalition faces a tough slate of measures to approve in short order.

The December session of parliament will be debating not only the 2001 state budget, but also a major overhaul of the constitution and a wide-ranging reform of the civil service. The latter two drafts require a two-thirds (90 votes out of 150) majority in parliament.

Until last Sunday, the coalition had commanded 92 votes, but the departure of the KDH means that nine MPs will now no longer be bound by government voting patterns. The KDH leadership has reassured its partners that it will continue to support coalition measures, despite widespread misgivings.

And there are other fears, among them that if the KDH became a fifth member of the government, it could demand more cabinet seats than the one it now has (Dzurinda's SDKÚ, by comparison, has six cabinet posts even though it is barely twice as large as the KDH).

Once again, the KDH brass firmly rejected any greater claim to executive posts. "There's no reason for any government party to abuse this situation to demand a reconstruction of the government," said Hrušovský.

Even more serious is the question of the coalition agreement - a document signed by the four original government parties in 1998 which sets the rules of cooperation between them. As long as the SDK caucus was unitary, if not united, there was no reason to open the agreement, but with the departure of the KDH the situation may change radically; after all, the government may soon have a new element within it not bound by any agreement or prior understanding.

"I don't think the KDH step will lead automatically to a reopening of the agreement, because so far they have said they agree with the policies and the priorities of the government," said Mesežnikov. "But the fact is that by launching its own caucus, the KDH has created room for presenting its own power demands. In theory, they could demand a cabinet shuffle."

Other government officials seem to regard the agreement as already opened, with SOP boss and Deputy Prime Minister for Integration Pavol Hamžik saying that both Dzurinda and Hrušovský, by their recent steps, had cast the document in doubt "and that's why the SOP is calling for an immediate clarification of coalition relationships."

For the SOP, the way out of the mess is for the KDH to sign the coalition agreement like the other four parties. "We're prepared to admit the KDH as an equal coalition partner," Hamžik explained.

The SMK and the SDĽ, on the other hand, have refused to elevate the Christian Democrats to full coalition membership, and have proposed their allegiance be secured through an appendix to the agreement - a 'four plus one' option which would allow the KDH to participate in the meetings of the four-member Coalition Council.

That's also the option that most suits Dzurinda, who admitted that "so far, that's really the way it has worked, although informally." For Dzurinda, though, the fact that the KDH might be allowed to tag along at Council meetings does not make them an equal partner.

How Dzurinda and the government handle the KDH apostates is being watched very closely by the SDK's other four ambitious factions, particularly the Democratic Party (DS) of Deputy PM Ivan Mikloš. The DS has actually indicated that unless Dzurinda's SDKÚ becomes an official sixth 'platform' within the SDK, thus making relations with other blocs more above-board, it may follow the KDH example and take its four MPs out of the SDK.

With three other small SDK factions making similar noises, bringing together their eight MPs with the same demands as the DS, the party's future appears gravely imperilled. It's a view supported by Ján Budaj, head of the tiny Liberal Democratic Union, who said that with the departure of the KDH, the SDK had lost "all sense".