THE HAGUE, The Netherlands: Peter Kamenický, the director of the Dutch food giant Unilever in Slovakia, narrowed his eyes appreciatively as he surveyed a room full of Dutch and Slovak business people deep in conversation. "I'm just enjoying the atmosphere," he smiled between drags on a cigarette. "Communication is a great thing."
Communication was both the theme and the main attraction at all levels of the Inwest Forum investment conference that took place in The Hague on November 16. Not only were top Slovak officials such as Deputy Prime Minister for Economy Ivan Mikloš and Agriculture Minister Pavol Koncoš on hand to impart the latest developments in economy, legislation and investment, but a delegation of 27 Slovak firms looking for investors and customers was paired off with potential Dutch partner 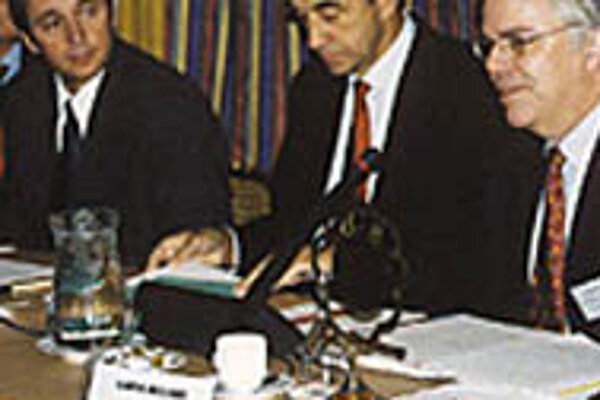 Font size:A-|A+  Comments disabled
THE HAGUE, The Netherlands: Peter Kamenický, the director of the Dutch food giant Unilever in Slovakia, narrowed his eyes appreciatively as he surveyed a room full of Dutch and Slovak business people deep in conversation. "I'm just enjoying the atmosphere," he smiled between drags on a cigarette. "Communication is a great thing."

Communication was both the theme and the main attraction at all levels of the Inwest Forum investment conference that took place in The Hague on November 16. Not only were top Slovak officials such as Deputy Prime Minister for Economy Ivan Mikloš and Agriculture Minister Pavol Koncoš on hand to impart the latest developments in economy, legislation and investment, but a delegation of 27 Slovak firms looking for investors and customers was paired off with potential Dutch partners during a three-hour round of face-to-face meetings.

Most of the 126 participants said they had been agreeably surprised by the merits of the conference, while others suggested that the true message communicated at The Hague had been that Slovak officials were finally beginning to understand the importance of presenting the country in a professional manner.

"I've been quite pleasantly surprised with this conference," said Marián Pirožek, technical and production manager at Poprad-based Tatramat Quasar, which makes aluminum castings for water boilers. "I was at a similar meeting in Austria, but this one is far better organised and the government presentations on a much higher level. I think the work of the government is beginning to be felt, and that western Europe is beginning to open up to us as compared to several years ago."

The afternoon 'matching session' between Dutch and Slovak firms was a new wrinkle introduced at the Hague meeting by conference organiser B + Business. Participants were given a roster which paired them for half-hour chats with up to six foreign firms in their sector, and while no one reported they had actually signed a contract during the session, almost all businesses said they had made important contacts and taken the initial step towards potentially fruitful cooperation.

"I've already got quite a lot out of this conference because I've spoken to a lot of interesting people this morning," he said, tapping tobacco into his pipe during a break. "I came to learn what is new and what good news I could tell my clients in order to persuade them to take the second step, which is to get in the car and visit Slovakia and see for themselves."

Flapper, whose firm is also involved in tourism, marketing and training, had stopped listing Slovakia to his clients in 1996. Asked what had brought him back, he quickly counted the reasons off on his fingers: "The interest from our side has been driven by our clients. First of all, the change in government has opened up the country to the West; then, Slovakia's possible entry into the EU and its better relations with the Visegrad countries [Poland Hungary, the Czech Republic and Slovakia - ed.note] have made it much more interesting for potential investors."

With the increased interest has come increased demand for information. Dutch Ambassador to Slovakia Henk Soeters explained that "[potential Dutch investors] are here to find confirmation of information they have gathered in the past. This was a very timely conference, both as far as political developments go [in Slovakia, for example the failed referendum on early elections - ed. note] and new rules of the game for investment.

"I see Slovaks sitting with Dutch, so I think the matching was well done. I myself introduced important Dutch companies to important Slovak decision-makers."

While most of the praise was reserved for the matchmaking session, many delegates remarked on the clarity, quality and brevity of the speeches presented by Slovak government officials during the morning session.

Roland Kreškóci, managing director the small Slovak firm Biopomoc, said he had been particularly impressed by Mikloš' opening remarks and by those of Alan Sitár, head of the SARIO state investment agency. "I am very happy with SARIO, that finally there is an institution really bringing together all the positives, and particularly with Sitár, who seemed to me very professional and capable," he said during the closing wine reception.

Mikloš, on the other hand, said participants had responded best to the remarks of Heineken's Marc Bolland, who used his allotted 15 minutes to describe how the Dutch brewing giant had cooperated with Slovak farmers to massively increase their seeding and production of barley, thus supporting Heineken's malting plants.

"The best promotion was Mr. Bolland's presentation, because it was based on his personal experience," the Deputy PM said after a hasty lunch. "Everyone expects that we will promote the country, but it's much more effective when it comes from his side."

There were, of course, exceptions to the rule. Agriculture Minister Koncoš delivered what most listeners privately agreed was a poor speech; after opening in Slovak, the minister allowed his translator to simply read the rest of the presentation in monotone English, Koncoš himself standing motionless all the while at the podium. The room grew visibly restless as the translator recited long lists of agricultural products which fall under the ministry's jurisdiction.

Asked what he had thought of Koncoš' speech, Mikloš smiled broadly: "If you agree, I will not comment on this topic. We have things to learn in every area, and this one as well."

Anton van Beek, head of the Dutch Chamber of Commerce responded: "I had a look at his [Koncoš'] colleagues, at the other functionaries, because I was also sitting next to him, and I had a good view of their reactions. I can't say anything about this."

Nor were participants in the matching session unequivocally enthusiastic, with one Dutch investor voicing disappointment that his Slovak counterpart had not shown up, despite having specifically requested a meeting. "Once again, they haven't shown up, and that's maybe just an indication of how well negotiations are going in our case," he said. "I know that Slovakia still has its problems, but this kind of thing looks very bad to investors."

Tatramat's Pirožek declared himself slightly disappointed with what he perceived as a lack of help from the government in finding a partner. "Firms like us still have to search actively on our own, without any help. If we relied on the government we would still be sitting in Poprad and we wouldn't have a single customer," he said.

But on the whole, all agreed that the conference - as much as new legislation and incentives in Slovakia - had marked significant progress towards attracting new FDI.

For those investors who still said the Slovak business environment was not stable enough to risk their money, and that poor or even crooked management at Slovak firms remained a danger for foreign strategic partners, Mikloš said that "until now, asset stripping has been relatively easy. But with the new Bankruptcy Law and financial sector restructuring, it will be more and more complicated to pursue this [asset stripping] strategy, and many companies will have only two possibilities - either go bankrupt, or find a strong partner to develop the company.

"Of course, legislation has to be accompanied by implementation and enforcement," he continued, "which calls into question the capacity of the institutions which have these responsibilities. But we have programmes - public administration reform, our audit of state administration, our anti-corruption fight - and we are pushing things in this direction."

Apart from stronger legislation, the cooperation of private firms and the foreign diplomatic community in promoting Slovakia was also seen as a promising direction for FDI. With both the Dutch embassy in Bratislava and the Dutch chamber of commerce playing a key role at the conference, Ambassador Soeters said delegates had glimpsed the future of investment strategy.

"We once had a very famous minister of foreign affairs who said 'un diplomat ne vend pas des fromages' - a diplomat never sells cheese. That has changed. The new generation of Dutch diplomats should be far more active in making sure that Dutch industry and the Dutch commercial position is being defended well, and in this the embassy can be used as an instrument in parallel with chambers of commerce."

With help from all sides, Mikloš added, Slovakia's advantages over its neighbours would soon be common knowledge rather than a guarded secret.

"These conferences are maturing. The organisers have a new idea, which is to hold a common conference of all Visegrad countries, beginning next year in New York. The idea is that if the conference is region-wide, it will attract more potential investors, and then of course we have to compete among ourselves to offer concrete conditions."

It's a competition Mikloš feels increasingly sure Slovakia can win. "In comparison with these countries we can offer the lowest salaries and at least the same level of labour qualifications. Also, because we have very low FDI, we can offer a lot of assets and lower competition, which allows investors to obtain better conditions and better prices.

"[Offering cheap labour] is not a long-term strategy, but of course raising salaries across the whole region will be a long-term process, not one accomplished in five or six years - maybe 20 or 25. It is very probable that after some time, production which is based on cheap labour will move to other markets. In the meantime, it will allow us to restructure and to increase the sophistication of our production."