NASA to land soon in EuroValley?

The creation of 'EuroValley' - a proposed Information Technology park in western Slovakia's Malacky region - may be fuelled by the world-renowned American space research giant NASA [National Aeronautic Space Agency].
According to Leighton Klevana, the former director of the American Chamber of Commerce (AmCham) in Slovakia and now head of the proposed EuroValley project, NASA has expressed an interest in the Slovak site, on which they would build a laboratory housing a simulation centre close to participants in existing NASA projects in eastern and western Europe. 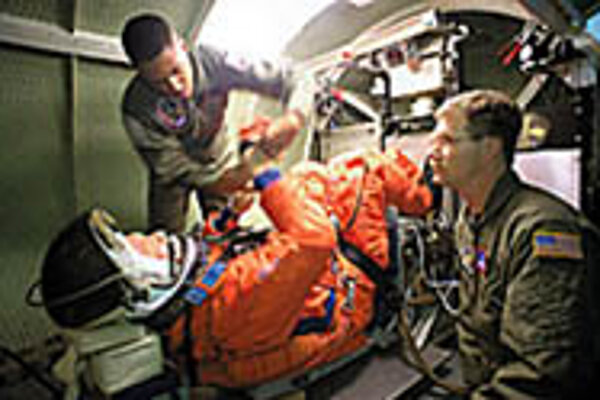 According to Leighton Klevana, the former director of the American Chamber of Commerce (AmCham) in Slovakia and now head of the proposed EuroValley project, NASA has expressed an interest in the Slovak site, on which they would build a laboratory housing a simulation centre close to participants in existing NASA projects in eastern and western Europe.

"I would say the odds of NASA coming are quite good," Klevana told The Slovak Spectator November 15, adding that were NASA to set up camp in Slovakia, it could open FDI floodgates to the country. "If we get them, we won't have to go after other potential investors. They'll all come."

US Republican congressman John Mica (Florida), who has long been a supporter of the EuroValley project, told The Slovak Spectator he agreed that the potential NASA investment would be a boon for Slovakia. "Slovakia needs to continue seeking economic opportunities with the West," Mica said. "This EuroValley involvement with NASA could only help."

In order to lure NASA into the planned Slovak park, Klevana said that EuroValley would pursue a "niche" which would be attractive to the American organisation. "We had to pick out a niche, and EuroValley's niche will be simulation training. It will be modelled on the Central Florida Research Park [at Central Florida University] in Orlando [Florida]."

Simulation training, according to a document prepared by AmCham's Jana Kopcová for the project, is "the creation of an environment by artificial means where events and actions take place in a manner similar to that which occurs in the real world without associated hardware costs and risks to life and property."

"Modern simulation and training grew in the 1950's from the need to train large numbers of pilots for the military," she continued in the report. "Since then, a full spectrum of simulation techniques has been established from the creation of large simulated environments... which create very personalised environments (also called 'virtual reality')."

She added that although simulation had its roots in military applications, today simulation training reached far beyond the borders of the armed forces. "Visitors to Disney Quest, medical students learning surgical techniques, and astronauts preparing for space travel all benefit from simulation technology."

NASA headquarters in Washington D.C. were unavailable for comment on their involvement in the park.

Besides NASA, Klevana said that a Taiwanese investor was also being actively sought after by those involved with the EuroValley project. Peter Weber, general manager of Compaq Slovakia, led a trade delegation in March made up of 20 Slovak representatives which visited Taiwan to promote the project.

The success of EuroValley would mean a massive financial and intellectual windfall for Slovakia as it would create thousands of new jobs, inject billions of Slovak crowns of foreign direct investment (FDI) into the economy, advance Slovak space exploration, and alleviate the so-called 'brain drain' Slovakia has suffered as highly skilled IT technicians head west for salaries more lucrative than those currently on offer in Slovakia.

"EuroValley is very important for Slovakia, it would be a tremendous boost for the economy," said Katarína Mathernová, advisor to Vice Premier for Economy Ivan Mikloš.

She added: "The government has in the past mobilised itself when it comes to big investments and I think that they'd do the same for a project of this magnitude. Just look at how [active] it was with US Steel [which invested into eastern Slovak steel producer VSŽ]."

Estimates prepared by the Slovak Economy Ministry suggest that the potential EuroValley investment would bring 2.1 billion Slovak crowns in revenues into the state budget and public funds anually from corporate taxes alone by the year 2010, while creating some 18,000 IT-related jobs by the same year .

"This will give Slovak IT specialists a reason to stay in Slovakia," Klevana said. "And it would be advantageous for American firms because they could make investments for less money and take advantage of the brain power here."

Congressman Mica, agreed: "I strongly support the EuroValley Project. This would be a good source of jobs and an engine for economic development in Slovakia."

Indeed, NASA has proven to be a strong generator of both jobs and revenue for other areas it has settled in, including the region around the Central Florida Research Center, which EuroValley would attempt to emulate.

According to the EuroValley Project report compiled by the the EuroValley Commission, "the Central Florida Research Park standing alone has an annual payroll of $410 million US dollars". Moreover, 69,961 direct employment opportunities have been created since its establishment in 1985 (174,900 jobs indirectly), while the centre has created $2.8 billion in direct income and $4.8 billion in indirect income.

Also according to the report, Slovak space exploration would gain from a NASA investment in Slovakia. "NASA [has] suggested a Slovak be selected and trained for one of its missions to outer space to perform experiments prepared in Slovakia."

When asked why an organisation such as NASA would select Slovakia as a site for its European branch, insiders said the answer came down to three benefits: location, cheap labour and a skilled IT workforce.

Furthermore, the land in question (covering 1,280 hectares, which the highway would run through) is currently owned by the Slovak military. Although Klevana said that purchasing the land from the army could be an obstacle, he added that he was confident it would eventually be acquired.

The Slovak workforce is also considered to be relatively cheap. According to the Slovak Finance Ministry, the Slovak average wage per hour is $1.20, compared to $1.40 in Poland, $1.50 in the Czech Republic, $1.90 in Hungary, and $15.10 in EU countries.

Additionally, investors are promised a highly educated workforce will be employed at the park. The EuroValley project report states that: "12.6% [of the Slovak population have graduated from university and almost 40% [have] completed secondary education. Also, it is noteworthy that 39% of all graduates are fluent in English."

For Mathernová, Slovakia is a country ready to supply such an investment with capable employees. "Young Slovaks are very adaptive to new technology and new ideas," she said. "If you look at examples like bank teller machines and mobile phones, we stick out in this region for how we adapt and embrace new technologies, even compared to Austria [in western Europe]. It goes with the fact that we are a young country."

Optimistic about the eventual fruition of the project, Klevana admitted that EuroValley was still in its infancy. "Now we are just in the itinerary stage," he said. "We are waiting for a feasibility study to be completed and then a business plan. Together, these initial costs are budgeted at 450,000 Slovak crowns ($9,000), but I think we could move ahead even with just 300,000 crowns."

Once completed, he said, the project would move into overdrive in hopes of turning today's aggressive ambitions into tomorrow's very lucrative reality.

"Right now EuroValley is only a dream," Klevana said. "But Slovakia has great potential and if we can pull this off, it would put Slovakia on the world map."