Slovakia 'ready for the world'

US Ambassador to Slovakia Carl Spielvogel speaks deliberately, measuring his cadences with slow hand gestures.
"Slovakia is ready for tourism, Slovakia is ready for culture, Slovakia is ready for business," he intones, reciting the mantra of his new campaign to promote the country's potential. "I want the Slovak people to say, 'We are ready to participate in this larger world'."
For all his Olympian calm, however, the pace of Spielvogel's life since he took up his post 11 weeks ago has been frenetic. 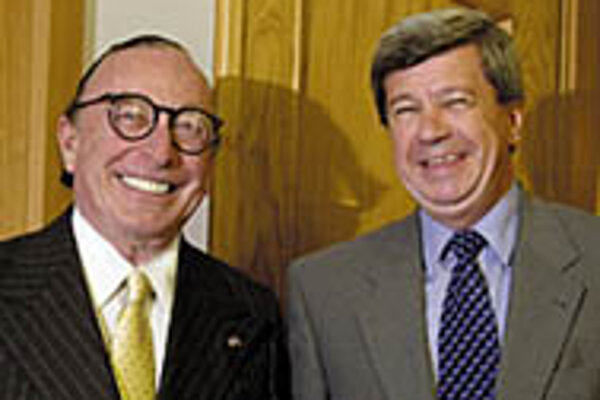 For all his Olympian calm, however, the pace of Spielvogel's life since he took up his post 11 weeks ago has been frenetic. In addition to the expected flurry of meetings with senior politicians, business people and NGOs, the new ambassador has been chivvying marketing firms, the media and government officials to get together in the task of promoting Slovakia, a country he feels deserves to be better known.

As Spielvogel himself admits, this 'pro-active' approach to helping Slovaks help themselves is in keeping with the reputation of Americans around the world as benign busybodies.

"It's an interesting thing. We currently are the only superpower, and whether people like it or not that's the way it is and will be for a while," Spielvogel says. "It's part of the American character and culture to want to help other people. Philanthropy in the United States is incredible. But there's a fine line between confidence [in what one is promoting] and arrogance, and I would like to feel that what we're trying to do here comes out of a sense of wanting to help. Not ordering, but suggesting."

The task at hand

What Spielvogel is suggesting is a pro bono cooperation between Slovak advertising, publishing, media and production companies, similar to the Advertising Council in the US, that would promote Slovakia - a public-interest project that has been neglected by official bodies such as the Culture Ministry and the Ministry of Foreign Affairs for lack of both funding and know-how.

In the first phase, the group will 'sell' the virtues of the country to Slovaks themselves, creating in Spielvogel's words "a sense of excitement" among citizens as to the potential of their nation. Space will then be donated in media, funding secured from brand name companies, and the message taken to the world.

"I've been in communications all my life, and I was struck when I arrived by the [Slovakia's] rich culture, as well as the fact that no one knows about it," said Spielvogel. "I've been pleased with the enthusiasm shown by the people I've discussed this with. As the old saying goes, a rising tide raises all ships."

Enthusiasm does indeed seem to surround the project. Radovan Grohoľ, managing director of Mayer/McCann-Erickson, one of the two marketing firms leading the promotion campaign, said that Spielvogel's involvement marked a new and promising turn in the country's pressing image problem.

"None of us knew what this was all about when we got the invitation to attend the first round table in October, but of course one doesn't turn down an invitation from the US Ambassador," he said.

"It's not that this kind of thing hasn't been suggested before, but I think it's owing to the moral authority of Mr. Spielvogel and his professional qualifications that this time it has a chance to succeed. For Slovak firms, which are in tough competition with each other, he is a guarantee of a certain measure of independence, that the project won't be politicised or sold out."

Grohoľ also supported Spielvogel's belief that the time had come for the Slovak private sector to act rather than sit on its hands and complain that the government wasn't doing its job. "The ambassador took on himself a role which should be fulfilled by the Foreign Ministry or our government - that's what we pay taxes for - but which they clearly don't know how to perform, or are doing poorly, ineffectively or not at all."

The initiative has caught the attention of people not originally invited to the 27-member promotion round table, such as Jake Slegers, acting director of the American Chamber of Commerce (AmCham). While the Amcham was not so much focused on bringing in or finding new businesses as on supporting firms that have already invested here, Slegers said, Spielvogel's drive "without a doubt" represented an opportunity for the chamber to broaden its role.

"We're very excited about the American ambassador's new initiatives, and we're looking for ways to cooperate, especially after a period of such little activity," he said. "It's a natural evolution, but it's also a case of taking an opportunity when we see it. It's been begging to happen for a long time."

The ambassador's 'go get 'em' attitude has awoken pride in the non-business expat community as well. Jana Chavez, a Los Angeles resident of Slovak and Mexican parentage, said that Spielvogel's project went to the core of what had struck her most about Slovaks since arriving in the country four months ago - the gloom and pessimism of ordinary people.

"Slovak people are not happy people, and most people I meet want to leave the country," said the 22 year-old language teacher. "I'm fearful for what will happen here, but if he [Spielvogel] can change that, more power to him."

Philip Brasfield, a Peace Corps volunteer with the Národný trust Slovenska (National Trust of Slovakia - NTS) NGO and a retired former Cleveland investment banker, said he too had been impressed by Spielvogel and his wife, author Barbaralee Diamondstein, both of whom he described as "very dynamic and committed".

Despite the support, however, Spielvogel may never get to see the fruit of his initiative as US ambassador. Appointed by US President Bill Clinton, a Democrat, Spielvogel must now wait to see if the US elections are won by Democrat Al Gore or Republican George W. Bush. According to US custom, all ambassadors submit resignations to incoming presidents; ambassadors who are career diplomats are usually confirmed in their posts, while those who were appointed for political reasons are often recalled.

Spielvogel, who has been active in the New York state Democratic party for 30 years, professes cautious optimism that he will be left in his post whoever wins the elections, saying that he serves at "the pleasure of the President". But American expats of all political stripes are already fretting at his possible recall next year.

Brasfield, a lifelong Republican supporter, said that given the likelihood of Spielvogel's recall if the Republicans won, "I'd hate to see Bush elected, for that reason alone".

Slovak Deputy Prime Minister for Integration Pavol Hamžík also said that it would be a shame were Spielvogel not given the chance to serve out his three-year term. Although the Slovak government had good contacts with both US parties, he said, "Mr. Spielvogel is exceptionally engaged and caring - it would be a pity if he were recalled, since we now have an ambassador who is focused on deepening our economic contacts".

But those involved in the promotion project take comfort in the fact that however long Spielvogel's stay turns out to be, his Slovak legacy is approaching critical mass, and will soon have a life of its own.

"I want to believe that [if Spielvogel is recalled] this thing will already be in motion, and that it won't be possible to stop it," said Grohoľ, adding that the ambassador had already set an example for all to follow.

"I think Slovaks should think very carefully about the fact that this initiative was proposed by someone who cannot profit from it directly, someone who has the moral right to say 'I want to help'."