What do a Pakistani, an Afghan, and a Zimbabwean have in common? On a recent afternoon, a lecture on prehistoric times - in Slovak.
The trio of students had been in Slovakia for months, not years, but with the instructor enunciating every word and speaking slower than usual, they were able to follow the story of man's evolution from 12 million years BC to the present.
That they were able to accomplish this miracle of comprehension is due to the training they received at ÚJOP, Slovakia's lone preparatory institute for foreign students studying in Slovakia... 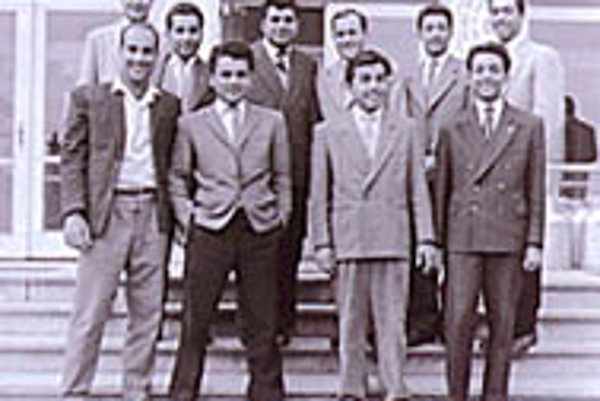 Font size:A-|A+  Comments disabled
What do a Pakistani, an Afghan, and a Zimbabwean have in common? On a recent afternoon, a lecture on prehistoric times - in Slovak.

The trio of students had been in Slovakia for months, not years, but with the instructor enunciating every word and speaking slower than usual, they were able to follow the story of man's evolution from 12 million years BC to the present.

That they were able to accomplish this miracle of comprehension is due to the training they received at ÚJOP, Slovakia's lone preparatory institute for foreign students studying in Slovakia. ÚJOP recently passed a milestone in its own evolution. On November 14 the school celebrated 40 years of teaching the difficult Slovak tongue to foreigners - a process it's faculty invented nearly from scratch.

"It was horrible in the beginning," remembers Tomáš Dratva, one of ÚJOP's first teachers, who taught at the school from 1960 to 1993. "We tried to teach them as though they were Slovak children. We used children's books and anything else we could think of, but nothing worked."

Although education officials in the former Czechoslovakia, which freely gave scholarships to foreign students throughout its communist history, had decided to open a Slovak "course" (the name ÚJOP came early in the 80s), they overlooked the fact that Slovak had rarely been taught as a foreign language - there were no trained teachers of Slovak as a foreign language and no suitable textbooks.

"Every day we woke up and figured out what we would teach that day," continued Dratva, who later became the author of the first Slovak textbook for foreigners, Slovenčina pre cudzincov (Slovak for foreigners) in 1967. "The second year saw some improvement when Czech professionals helped us with materials and texts. Gradually it got better."

Some 8,000 students and 77 textbooks later, ÚJOP is a far cry from the struggling collection of teachers to which Dratva belonged. Today ÚJOP has not only a large and well-trained staff, but years of experience to draw on - even the school's doormen in Bratislava give advice on Slovak grammar, as this journalist found out on a recent visit.

"The school really does a wonderful job," said Muhammad Suleman Ajiz, the Pakistani student who had taken in the history lecture less than two months after arriving in Slovakia. "I spent a month in Teheran and couldn't understand anything. After a month at ÚJOP, I can shop and ask for directions in Slovakia."

Upon arrival, students are put through an intensive six week course consisting of five Slovak lessons a day. When that's finished, they begin studying in their specific areas of interest, including medicine/biology, engineering, economics, the humanities and the arts, all with a focus on Slovak terminology. At the end of their first year in Slovakia they take university entrance exams and, if all goes well, start studying with Slovak students the following fall.

"It was horrible my first week. Nobody spoke English anywhere. I wanted to go home," laughs Ajiz, who plans to study journalism next fall. "But the classes were really good, and I started to get used to the language. Now I'm very happy to be here."

While Ajiz is a satisfied newcomer, after 40 years of service ÚJOP also boasts many thankful alumni who eventually settled in Slovakia and became successful members of society.

"ÚJOP is the basis for my time in Slovakia. Without ÚJOP I never would have stayed in Slovakia and gotten to where I am today," said former ÚJOP student Ibrahim Maiga. After finishing his studies in the 1980s, Maiga made it big in Slovakia in the 1990s as a pop and film star, and is today one of the most recognised celebrities in the country. "I never could have sung even one of my famous songs if I hadn't learned Slovak."

Others remember the unique - and often comical - experience of living in tight quarters with students from the whole world over.

"I remember the Arabs and Africans never got along. Two of them would start fighting, everyone would take sides, and soon there would be a huge brawl. It must have happened 10 times during the year," said Cypriot Alper Ozogman, who studied at ÚJOP in 1991 and now works as an English language consultant in Bratislava.

Ozogman says ÚJOP graduates remember some of the difficulties they had to face. "Our first week, we all came to Košice on a Friday. But no one told us that everything was closed in Slovakia on the weekends. They gave us some meat but no one wanted it because it was bacon which was almost entirely fat. We all starved that weekend," he said.

Students no longer have to worry about finding food on the weekends. Nor do ÚJOP officials have to worry about the basics of language instruction. It seems that after 40 years in the business, most of the wrinkles have been ironed out of the programme.