History is full of politicians whose careers were cut short after they became the unwilling bearers of bad tidings. It's relatively rare, on the other hand, that such messengers have been rewarded with increased voter support, as Slovak Deputy Prime Minister Ivan Mikloš and Finance Minister Brigita Schmögnerová have been in recent months
In a late September poll conducted by the Statistics Office, Mikloš commanded 7.9% voter trust, up from little over 5% in August, while Schmögnerová rose to 6.6% from around 3%. The two officials are now the sixth and seventh most trusted politicians in Slovakia, respectively, despite the fact that they have been identified as the authors of some of the most unpopular economic 'austerity' reforms of the past two years. 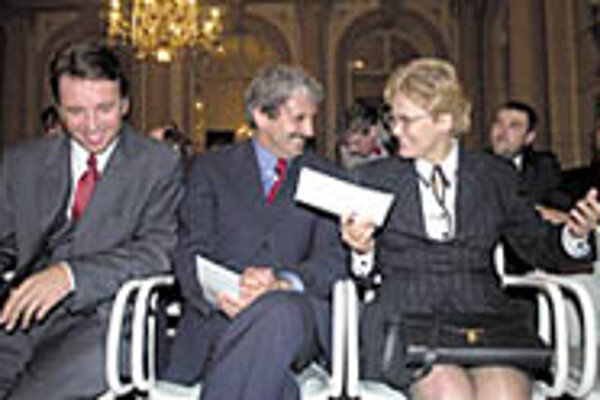 Font size:A-|A+  Comments disabled
History is full of politicians whose careers were cut short after they became the unwilling bearers of bad tidings. It's relatively rare, on the other hand, that such messengers have been rewarded with increased voter support, as Slovak Deputy Prime Minister Ivan Mikloš and Finance Minister Brigita Schmögnerová have been in recent months

In a late September poll conducted by the Statistics Office, Mikloš commanded 7.9% voter trust, up from little over 5% in August, while Schmögnerová rose to 6.6% from around 3%. The two officials are now the sixth and seventh most trusted politicians in Slovakia, respectively, despite the fact that they have been identified as the authors of some of the most unpopular economic 'austerity' reforms of the past two years.

So, have the country's leaders mistaken the maturity of the country's voters, or their tolerance for necessary reform that leads to demonstrable economic improvement? According to the two beneficiaries of the latest voter mood change, the answer is yes.

"The latest opinion polls show that people appreciate truth and even tough measures if they prove to be necessary and effective," said Schmögnerová in an interview with The Slovak Spectator November 8. "It's true that most people haven't yet started to feel the signs of economic improvement in their pockets, but they can still see some price stabilistation, that interest rates and unemployment have gone down, that industrial production has gone up."

"I think people these days understand how complicated economic transformation is, and the inutility of easy populist solutions," said Mikloš during a break from a Bratislava investment conference November 7. "They've already had enough experience of populists and magical solutions to serious problems. The public has simply matured, it's that simple."

Of course, there's more to the newfound popularity to technocrats Schmögnerová and Mikloš than just Slovaks' having developed an appetite for punishment. Grigorij Mesežnikov, president of the Bratislava think tank Institute for Public Affairs, gave at least part of the credit to foreign policy successes such as Slovakia's recent acceptance by the OECD and its rating upgrade to positive by international ratings agency Moody's.

"It's no secret that these successes were largely due to these two people," said Mesežnikov.

Schmögnerová, furthermore, won a high-profile Euromoney magazine award this spring as Finance Minister of the Year, and was mentioned as a candidate last year for a top UN economic post. "I think the international recognition I received this year has also had some impact," she reflected.

Mikloš, for his part, was self-effacing, ascribing the latest poll results to the role played by the Slovak media, which he said had dramatically improved the quality of its business coverage over the past decade, and thus had educated the electorate to the point that voters were able to understand the need for painful cutbacks.

But the rising popularity of these two architects of economic reform would likely remain an interesting piece of political trivia were it not for the effect that such voter preferences may have on their parties, and on how ruling coalitions approach the electorate in 2002, the next scheduled round of parliamentary elections.

While Mikloš hinself enjoys almost 8% voter trust, his right-wing Democratic Party (DS) has only 2.5% support, well below the 5% needed to secure parliamentary representation in 2002. Schmögnerová, meanwhile, is a member of the former communist Party of the Democratic Left (SDĽ), which itself is battling to remain above 5%.

Political scientist Oĺga Gyárfášová said that the fact the pair were "regarded by the public as specialists, not politicians" explained their ability to rise above the plunging fortunes of their parties. The SDĽ has suffered the most in the polls from voter disappointment at perceived government corruption and broken promises, after having taken over 14% in the 1998 elections.

With party fortunes in disarray, and with the country's leaders anxious to capitalise on Mikloš and Schmögnerová's voter appeal, the duo are expected to play a 'dark horse' role in the next election campaign. Mikloš, for one, has been assiduously courted by Prime Minister Mikuláš Dzurinda, whose SDKÚ party remains a distant third in the polls, but has given every indication that he will remain with the Democratic Party.

"Dzurinda is clearly trying [to woo Mikloš], but he probably won't be succesful. Mikloš is firmly tied to the Democratic Party," said Mesežnikov.

Peter Tatár, Mikloš' colleague in the Democratic Party, agreed that it was highly unlikely Mikloš would jump ship for the SDKÚ. "The fact is that Dzurinda has not behaved correctly to a single one of the [ruling SDK's founding five] parties, because he hasn't kept his promises."

For Gyárfášová, Mikloš faces a dilemma in whether to join Dzurinda and thereby assure his political future, or to take on the difficult task of raising his own party's preferences - a decision he has been putting off as long as decently possible. "At the moment he is putting everything into his economic responsibilities, which I respect as the honourable decision," she said.

Schmögnerová's situation is more complicated - she has publicly differed with SDĽ party leader Jozef Migaš, who has the vital support of the SDĽ rank and file, for all that he has only 1.5% voter trust. The pragmatic Finance Minister has opened a new 'platform' within the party along with reformist social democrats like Education Minister Milan Ftáčnik and former SDĽ leader Peter Weiss, and has not denied aspirations for the party chairmanship.

"I don't exclude it [running for the leadership] totally, if there is not deeper change in the party - not just in leadership but in the party's behaviour. We really have to come back to those values which characterise a modern socialist party," she said.

"No question, I could see her as the party's leader, because she has general support among voters and authority within the party," said SDĽ colleague Ladislav Orosz.

But without deeper party support, Mesežnikov responded, the Finance Minister had only a slim chance of unseating Migaš. "Schmögnerová lacks the support of regional party delegates, who are united behind Migaš."

While their political futures remain unsure, however, both economic experts had advice for government parties on how to approach the electorate the next time around.

"The electorate, on the basis of the 1998 election campaign, learned a lesson. The question is if they will remember it in 2002," said Schmögnerová. "Some people still believe there is always some saviour who can solve everything easily. This gives me concern for the next election campaign - some people want to be deceived, they don't want to hear the truth."

"The basic problem is that the government coalition is not united when explaining to voters what we have to do," said Mikloš. "Critics within the coalition have knocked reforms, but haven't offered anything better. Government parties have to change the way they approach voters. The leader of the SDĽ has been one of the harshest critics of government politics, but we've seen it didn't help him or the coalition - quote the opposite. I think we've all learned from this, and that the coalition will be more compact in 2002."