Dexia Kommunalkredit Holding, a joint venture established at the beginning of this year between the French-Belgian financial group Dexia and Kommunal Kredit Austria Holding is the latest newcomer to the Slovak banking market. The group bought into Prvá komunálna banka (PKB) of Žilina in May 2000, and currently holds a 78% stake in the mid-sized Slovak financial house [registered capital 1.002 billion crowns ($40 million), total assets 20 billion crowns ($800 million) in September]
Francis Teynier, PKB's vice-president of the board of directors, spoke to The Slovak Spectator on November 3 about the Slovak banking market and PKB's place in it. 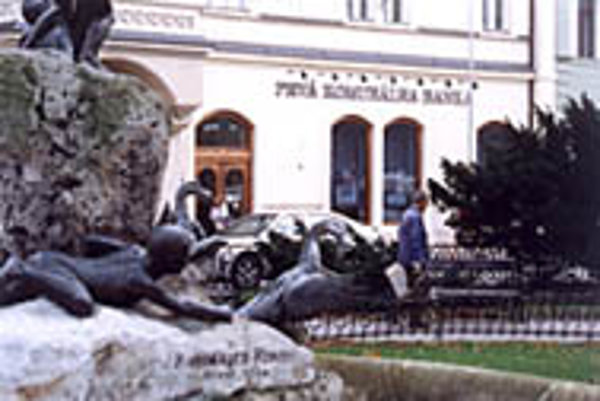 Font size:A-|A+  Comments disabled
Dexia Kommunalkredit Holding, a joint venture established at the beginning of this year between the French-Belgian financial group Dexia and Kommunal Kredit Austria Holding is the latest newcomer to the Slovak banking market. The group bought into Prvá komunálna banka (PKB) of Žilina in May 2000, and currently holds a 78% stake in the mid-sized Slovak financial house [registered capital 1.002 billion crowns ($40 million), total assets 20 billion crowns ($800 million) in September]

Francis Teynier, PKB's vice-president of the board of directors, spoke to The Slovak Spectator on November 3 about the Slovak banking market and PKB's place in it.

The Slovak Spectator (TSS): Why did Dexia and Kommunal Kredit come together last spring? Was it just for the PKB venture, or did it have a wider significance?

Francis Teynier (FT): PKB was the first opportunity that came up, but the fact is that Kommunal Kredit is physically close to central Europe and knows the region well, so teaming up with them was quite natural. But without breaking the secrets of the gods, I can say it makes sense to cooperate further if it appears interesting in other countries.

TSS: So PKB, for the time being, is your beachhead in Slovakia?

FT: In Slovakia yes, but there could be other opportunities for working with Kommunal Kredit outside of Slovakia. Dexia has a 26% stake in Kommunal Kredit, so we not only know each other very well but we also have shareholder connections.

TSS: PKB says it has also worked with Dexia for a long time, over six years...

FT: Yes, this cooperation began even before the creation of Dexia, with Credit Local de France, which sent a technical assistance mission very early in the existence of PKB to set up methods of analysing municipal risk and this kind of thing.

TSS: Given the instability on the Slovak banking market recently, what explains the apparent increase in customer confidence in PKB this year [deposit accounts are up 26% - ed. note]?

FT: There are three factors. First, PKB was already seen as a one of the better banks even before [Dexia entered it]; secondly, the backing of PKB by a strong foreign group has probably only increased that confidence. Finally, PKB has had some very strong and targeted ad campaigns, which apparently have been quite effective. It's difficult to weigh exactly what effect each factor has had, but PKB is definitely now considered one of the safer banks, where the risk of losing your money is low.

TSS: What about the other side of the coin - what made Dexia so confident in Slovakia and its banking sector that it was willing to risk its money?

FT: Dexia has been looking for opportunities to enter the region for quite some time. It just happened that the first opportunity to do this was in Slovakia. I don't think there were major concerns about the country. Of course, the choice of the partner was the most critical decision, and in that respect PKB appeared to Dexia a good choice because it was a private bank rather than a privatised bank, where there would have been a lot of cleaning to do.

Regarding Dexia's confidence in the banking sector, we are certainly aware of what's going to happen - everybody's waiting for it [the arrival of strong foreign financial houses through the privatisation of Slovak state-owned banks, and the resulting elimination of some smaller and weaker Slovak banks through the resulting competition - ed. note]. The main consequence of all this for us will be increased competition, but this is not something we fear - we experience it every day in every country in which we operate. Competition is a fact of life.

TSS: Do you then see Dexia's presence in PKB - a strong investor in a mid-sized domestic bank focusing on a specific market segment - as a model for how smaller Slovak financial houses are going to survive the privatisation of VUB and SLSP? Is finding niche products the way of the future?

FT: We know that we are and will remain in the category of mid-sized banks in Slovakia - we are not comparable to the big mastodons. The best thing we can do is to have a good business plan and good positioning on the market. But I'm not sure I would call PKB a niche bank; in some ways we are, because we have a specialisation the others don't have - our relation to the public sector and to municipal financing and project financing. On the other hand, we intend to remain one of the stronger retail banks for the general public. For this we will use our current network, which is neither too small nor too big; modern banking is to not put a branch everywhere.

Furthermore, our e-banking is not a niche strategy, it's more a question of modernising banking practices. It's a new banking tool which PKB has been using for a while and which it has continued with the WAP service.

TSS: What's behind your strategy to focus on municipal lending?

FT: This is Dexia's core business historically, as well as PKB's strategy. We joined forces precisely because it was focusing on the same core business and had no heavy risk history. The Slovak market is still extremely small, and if you take the overall lending activity in the country, the municipal part is a very small fraction of this. But the need is tremendous, and with the evolution that is coming - decentralisation of state power and Slovakia's efforts to join the EU - municipal lending for projects like water, sewers and garbage, environmental investment should get a huge boost. The market is now in its infancy, but has the potential to grow very large. Dexia has the tools and the experience, PKB has very good market penetration.

TSS: Your corporate lending has fallen two billion crowns this year. Is the corporate market still so dangerous for banks?

FT: There are several factors here as well. Although PKB did not have the same huge amount of loans as other banks, there has clearly been some kind of refocusing towards the best customers, linked to the new ownership and new strategy. Secondly, we don't consider this our core business, and we can be much more efficient by refocusing on well-chosen customers.

TSS: A group of city councillors with the city of Banská Bystrica sent an open letter at the end of October to SDĽ ruling coalition party leader Jozef Migaš complaining of corruption among SDĽ Banská Bystrica councillors in running up the city's debt. How concerned will PKB have to be with public sector corruption if it is making municipal lending its core business?

FT: In our lending policy we very much focus on risk analysis and professionalism. We want to lend to municipalities, but not at all costs. If we see that a municipality is mismanaged, of course this will influence our analysis from a sheer risk point of view. Dexia Group's senstivity to this kind of risk is very high. If a municipality has irresponsible management, I would say no matter why, this will shape our analysis; after all, if they act irresponsibly, one of the consequences may be that we get into trouble as well. So we are quite picky in this respect.