Expropriation: Who pulls the strings?

Government approval of a 2.7 billion crown ($54 million) industrial park just outside Bratislava for German car giant VW on October 31 seems to spell the beginning of the end for a problem that has plagued foreign investors - finding suitable land sites in Slovakia.
Many investors will be thankful that some of the legal nightmares of trying to acquire land for their investment from a number of different owners could be over, with the government making encouraging sounds about construction of many more similar sites following Slovakia's first at Lozorno.
Industrial parks are a boon to investors because land can be bought from one owner - the state - with infrastructure already connected and no 'time bombs' awaiting in delayed ownership claims. 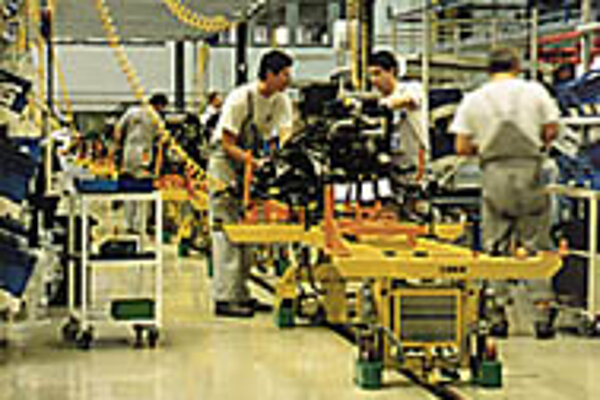 Font size:A-|A+  Comments disabled
Government approval of a 2.7 billion crown ($54 million) industrial park just outside Bratislava for German car giant VW on October 31 seems to spell the beginning of the end for a problem that has plagued foreign investors - finding suitable land sites in Slovakia.

Many investors will be thankful that some of the legal nightmares of trying to acquire land for their investment from a number of different owners could be over, with the government making encouraging sounds about construction of many more similar sites following Slovakia's first at Lozorno.

Industrial parks are a boon to investors because land can be bought from one owner - the state - with infrastructure already connected and no 'time bombs' awaiting in delayed ownership claims.

However, acquiring the land for the Lozorno project has thrown up a potentially worrying issue in the eyes of many land acqusition experts: if the government has to expropriate land from private owners to house investors, what mechanisms exist to ensure that the valuation and compensation of expropriated land is above board?

Expropriation - the seizure of land from private individuals by the state - is permitted in Slovakia to aid 'strategic' investments, defined as those that bring in over 400 million crowns to the country. Many in Slovakia's real estate sector, however, say the process will remain open to worrying levels of corruption until the government can ensure that state-appointed land valuers are doing their job exactly as they should.

"Where the real problem comes in [with valuation of land for expropriation] is this question of compensation. This is where it all gets a bit dicey," said Paul Carrier, attorney with the Slovak branch of the law firm Squire, Sanders & Dempsey.

The problems with land expropriation arise, some experts say, from wording in the Slovak constitution. Article 20 subsection 4 of the constitution states that "expropriation or enforced restriction of the ownership right is admissible only to the extent that it is unavoidable and in the public interest, on the basis of law, and in return for adequate compensation."

"This is relatively standard in many countries, most will have provisions for this kind of expropriation. But what is important is how the valuation of land for 'adequate compensation' is carried out, and who does it," said Carrier.

He added that many American legal experts would argue that in any constitution the wording should carry an extra safeguard - "in return for just and adequate compensation" - as in American constitutional legislation, to try to prevent nations from deciding arbitrarily what the level of compensation is, "which is an obvious danger".

The question of expropriation arose during the state's purchase of land for the Lozorno plant, after one person demanded 1,700 crowns ($34) per square metre for his land when all other parties involved had agreed on 150 crowns per square metre. The government was due to use the expropriation provision to ensure that the land was available for a site for the French firm Plastic Omnium, a supplier to VW, but agreement was reached at the last minute and no expropriation was required.

Valuations for land are, according to André Chmára, head of the commercial department at 1. Národná Aukčná real estate firm in Bratislava, carried out under a set of price guidleines that valuers follow. "There is a book value for land and the state has a price map that valuers follow, and that doesn't include the market price" he explained.

"There is corruption all across Slovakia, and it's just as possible that there would be corruption in this area as in any other. I don't know of any cases personally, but the best thing would be if there was a new law brought in that sets the price for land at the market price and not just according to these state-set guidelines.

"It's obvious that under this [present system] you could have a situation where a piece of land in Bratislava or another big city is valued under state guidelines at 1,600 crowns and people can afford to pay 2,200 crowns for it. Then you open up the possibilities for corruption. Of course in other regions, for example [northern Slovakia's] Orava, no one can afford to pay the same price set for [a similar piece of] land [i.e. 1,600 crowns]," said Chmára.

He added that the price guidelines also hit people who had to pay high taxes on land valued way above its market price. "The state price can sometimes be much higher than the market price," he said.

Grigorij Mesežnikov of the Bratislava-based think-tank Institute for Public Affairs (IVO) said that an increasing interest in land with investment opening up in Slovakia would require the government to make its rules on land valuation clear.

"Potentially, with a lot of interest in land now, there is room for corruption in this sphere. The issue of land and land ownership has become a very hot one politically. The government and state institutions must make clear their rules and guidleines on the valuing of land," he said.

"It would be useful for some international experts to give their help in land valuation," he added.

Under current legislation, however, all valuations must be carried out by valuers appointed by district courts. Valuers have a status similar to that of a notary, i.e. they must study at a special school in Slovakia and are then granted licences to work under local district courts, each licenced valuer working only in his or her district as appointed. And like notaries, each valuer has a set rate that can be charged for their services.

Representatives at district courts said that it was highly unlikely that there was any corruption among the ranks of appointed valuers, explaining that strict monitoring methods were used to regulate and investigate valuations if any complaints were raised.

"In 25 years of legal experience I've never had such a case myself," said Ida Takáčová, deputy-chief justice at the Bratislava IV district court.

"I know people talk about how many bribes there are in this area, but you must remember that in every case one party is happy with the decision and one is not. This makes it highly subjective, and the unhappy party can always raise allegations against the evaluator. There are many control mechanisms in place if there is any suspicion of corruption. For example, I can send out a controller to monitor and assess valuations at any time," she said. "All the valuers I have worked with are very good and want to maintain a good reputation."

When asked what she thought of foreign firms being allowed to carry out land valuations Takáčová said: "Using foreign evaluators is an issue for the Ministry of Justice. But I would personally welcome the competition, it's good generally to have competition and the quality of valuers would rise."

The Justice Ministry told The Slovak Spectator that at present there were no plans to allow international firms to value land for expropriation.

Despite the possible problems with land expropriation, the importance of the legislative provision for certain situations is agreed on. Some government projects have already been hit by intransigent landowners as Karol Balog, head of the Agency for Industrial Development and Revitalisation (AIDR), explained.

"One example of this was in the construction of the Malá Ida water plant near Košice. The original plan for [the area of] the plant had to be scrapped after one lady refused to sell just three square metres of land, even for an astronomical price, after everyone else had sold theirs. The location had to be abandoned and the plant was built somewhere else. The government had eventually to bypass her land and take the plant elsewhere. It caused a delay of two years," he said.

However, the Lozorno plant seemed to be important enough for the government to consider expropriation this time.

"The problem [for many investors] is that a plot or large area of land is often owned by so many different people and it is so hard to get all those owners together on agreement to sell all the land. It's almost impossible for an investor. Any such plant like Lozorno is important [for solving this problem] and we hope that more of these will pop up in Slovakia. There are already discussions for one near Košice," said Balog.