As all Europe now knows, the Slovak government is trying to recall Supreme Court Chief Justice Štefan Harabin. The news has been industriously spread by none other than Harabin himself, who in various complaints to the Council of Europe, the European Court for Human Rights and the United Nations has portrayed his potential recall as a violation of the Slovak Constitution and of his human rights as secured by European treaties. If Harabin wins his case at the European Court, the unwelcome publicity will come at a hefty price for the government - 22 million Slovak crowns ($440,000) in damages. 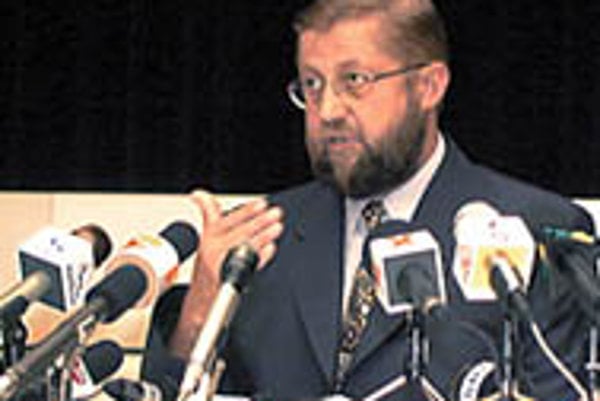 Font size:A-|A+  Comments disabled
As all Europe now knows, the Slovak government is trying to recall Supreme Court Chief Justice Štefan Harabin. The news has been industriously spread by none other than Harabin himself, who in various complaints to the Council of Europe, the European Court for Human Rights and the United Nations has portrayed his potential recall as a violation of the Slovak Constitution and of his human rights as secured by European treaties. If Harabin wins his case at the European Court, the unwelcome publicity will come at a hefty price for the government - 22 million Slovak crowns ($440,000) in damages.

The proposal to recall Harabin was submitted by Justice Minister Ján Čarnogurský and approved by cabinet on August 17. Čarnogurský, as the rest of his cabinet colleagues, says he is convinced Harabin is unfit to discharge his function because "he doesn't have the moral prerequisites".

"Slovak justice deserves to have a sharper legal personality in the post," the minister explained, backing a cabinet document that mentioned among its reasons Harabin's "amorality" and "professional intractability".

While many of the cabinet reasons appear similarly vague, there are a few established facts which lend some support to the government's position. In 1999, Harabin came to the defence of Supreme Court Deputy Chief Justice Jozef Štefanko, who at the time faced disciplinary proceedings for assault stemming from an incident in which the latter hacked his way into a Justice Ministry flat with an axe. Citing the Law on Judges, Harabin also pressed to have greater powers attached to his post, giving him the authority, for example, to decide the composition and the number of Supreme Court senates (the panels of judges which hear cases). He later nominated unqualified judges to these senates, moves which brought criticism from the independent Slovak Association of Judges.

Harabin also opposed the draft revision of the Constitution, despite the fact that a large majority of Slovak judges supported it, and was accused by the Justice Ministry of forging an ownership document on the Supreme Court building. The last allegation is under investigation, but was supported in a straw poll taken by the parliamentary Constitutional Law Committee among Supreme Court justices.

The same committee on October 31 recommended that parliament recall Harabin; parliament is to decide by secret ballot in late November whether or not the controversial judge keeps his job.

Whether parliament will follow the committee's lead remains to be seen. The latter body had to meet seven times before it could agree on a verdict. In parliament, the political opposition, which nominated Harabin to his job in early 1998 when in government, is insisting that Harabin's recall would be against the Constitution for three reasons: first, the Constitution (Article 145/2) says that Supreme Court Chief Justices are elected to five year terms, of which Harabin has served less than three; second, the Law on Judges and Courts states that judges can only be recalled after a disciplinary commission has ruled on the judge's conduct, which has not occurred in Harabin's case; and finally, that the Supreme Court Council of Judges and the Slovak Council of Judges must both rule on the matter, which they have not yet done.

Ján Cuper, an MP and legal expert for the opposition HZDS party, said recently that if the government were to break the law by recalling Harabin, "you can be sure that we will recall the replacement candidate after we win the next elections."

Across parliament, some government supporters are sounding confident, with constitutional expert and independent MP Peter Kresák citing the Mečiar government's decision to recall former Supreme Court Chief Justice Ivan Majerník in defence of Čarnogurský's initiative. "Today the opposition is using legal arguments that are the precise opposite of what they claimed in the past," he said.

But others are not so sure, suggesting that justice is being done at the expense of the letter of the law. Peter Weiss, a senior member of the ruling coalition Democratic Left Party (SDĽ), has already said he will abstain during the vote on Harabin. "I have mixed feelings. I realise that Harabin shouldn't be allowed to remain in his post, but I'm afraid that in recalling him we give the next government coalition the green light to recall any Supreme Court functionary before the end of their terms."

As for the man at the centre of the storm, he's certain he will not be recalled, and has been seen often in parliament this past week lobbying individual MPs on his own behalf. "Legislators realise that political organs cannot interfere with the courts," Harabin said, adding that his recall might hurt Slovakia's integration ambitions.

"Slovakia has already set one world record by [current Prime Minister Mikuláš Dzurinda's decision on December 8, 1998] overturning the amnesties [issued by former Prime Minister Vladimír Mečiar on March 3, 1998 to all involved in the Michal Kováč Jr. kidnapping and the thwarting of a 1997 NATO referendum - ed. note]," said Harabin. "This [Harabin's attempted dismissal] is another anti-Constitutional step which is viewed very dimly abroad."

But Minister Čarnogurský is still showing fight, having admitted that he is already assembling a shortlist of candidates for Harabin's replacement. "It will be above all a legal expert, not a political nominee," he said, while not denying that the next Chief Justice might be a woman.