As the workplace becomes more computerised, with employees serving customers via e-mail and Internet and company bosses managing workers by e-mail rather than meetings, the issue of confidentiality has been moved into the spotlight.
Managers who want to ensure that employees are using e-mail for work and not private purposes are demanding the right to periodically check the contents of electronic mail sent by their workers - a move that has met with stiff resistance from many company employees who want to ensure a level of workplace privacy. 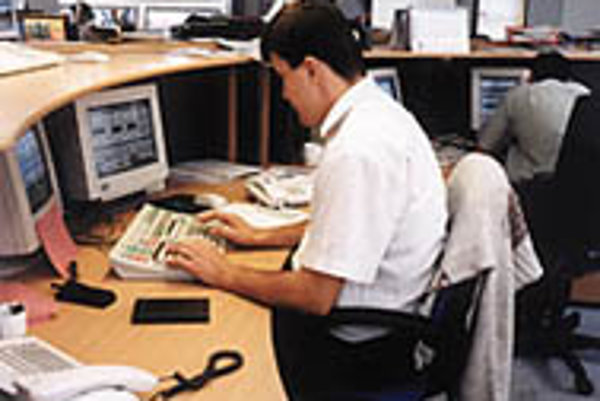 Font size:A-|A+  Comments disabled
As the workplace becomes more computerised, with employees serving customers via e-mail and Internet and company bosses managing workers by e-mail rather than meetings, the issue of confidentiality has been moved into the spotlight.

Managers who want to ensure that employees are using e-mail for work and not private purposes are demanding the right to periodically check the contents of electronic mail sent by their workers - a move that has met with stiff resistance from many company employees who want to ensure a level of workplace privacy.

In many western countries, this debate has been given a legal framework, with Great Britain for instance recently adopting a law allowing employers to read their employees' mail. But in Slovakia the issue remains open, with legislation neither forbidding nor allowing the practice.

"We have no law that specifies whether employers can or cannot have access to the electronic mail of their employees," said Peter Sucha of the Slovak Police Fraud and Economic Criminality Division. "I myself have looked for an answer to this question among experts on computer law, but they were unable to give me a clear statement on it."

In the absence of a law regulating the use of e-mail, some firms have already taken matters into their own hands. Tatra banka - one of Slovakia's most successful banks - told the daily paper Sme that it makes a practice of checking its employees' e-mail. Ivan Šramko, a member of the board at Tatra banka, said he would welcome it if Slovakia approved a law similar to Britain's, allowing companies to check exactly what their employees were doing during working hours.

"Employees are on the job in order to work, and not to take care of personal matters. And furthermore, sending and receiving e-mail costs the bank money." Tatra banka's internal rules, he added, forbid the use of e-mail for private purposes.

The import/export bank Exim Banka has taken a different approach to the issue, though, and company policy supports the privacy of employees' e-mail. Július Masarovíč, a financial officer at the bank, said that company employees are entrusted to use personal discretion when sending e-mail, and that he only sent personal mail after his work was finished for the day.

"I think that sending personal e-mail shouldn't be forbidden, it's more a question of when you do it," he said. "The use of personal e-mail should be allowed after work hours and there should be some limits. Being allowed to use e-mail for personal use makes for a more pleasant work environment - you can organise your life, it reduces stress and it can have a positive influence on your production," he said. Masarovíč added that he could understand why an employer would implement control measures over personal use of e-mail if employees were taking advantage of the system.

Jana Ďuričová, press secretary to the head of state bank Slovenská sporitelňa, said that while her firm's internal rules did not allow employees' e-mail to be checked, the bank was preparing a new control mechanism that would prevent the sending of certain files, or would notify managers that certain files had been sent.

She added that Slovakia's Labour Code gave employers the right to control how work time was being used.

Human resources experts, for their part, have said that regardless of a company's policy, the key to proper HR management regarding e-mailing lies in ensuring that the company's stance is clearly stated to employees.

"If a company is going to look at this stuff, it's something that they have to pre-warn employees about. It should be part of the contract or policy and should be made clear when it will happen and why," explained Steven Kelly, partner with human resources firm KNO Slovensko. "I see personal e-mail in a company as somewhat similar to having a company car and whether or not an employee is allowed to use it for personal use. In the beginning, a decision and policy has to be in effect. If the policy is that personal use is not allowed, then there should be methods set up to see that this is not happening."

Some experts have also doubted that the issue of workers' privacy is as yet as important as the issue of the technology behind checking the use of e-mail systems. Michal Ohrablo, senior consultant for human resource company Amrop Jenewein, said that in the absence of legislation, the focus of many managers actually lies in the integration of basic technology, not monitoring systems, and that the issue of privacy is far less pressing in Slovakia than it may be in the West.

"I don't think there is a danger regarding privacy issues in Slovakia," Ohrablo said. "It may be an issue in such countries where information technologies are well-established and developed. In Slovakia, managers first and foremost need the information that is essential for managing companies, and not yet to 'spy' on employees."

KNO's Kelly agreed, but added that as Slovakia strives towards membership in international organisations such as the EU, privacy issues will inevitably become more of a concern.

"Privacy of information is becoming more important as Slovakia looks to become a member of the EU [and local management technologies catch up to the more advanced systems in the West]. Highly visible cases regarding privacy that come up for whatever reasons will also bring more awareness to the issue," Kelly said.