This could be the beginning of a beautiful relationship...

MALÁ FATRA: "This is a miracle," gushed the attractive blonde Slovak businesswoman, poised in a remote locale in the Malá Fatra mountain range. In front of her on a meadow between two mountain peaks sat two large green army tanks, flanked by a sizeable herd of camouflaged men.
"This is big time film making," agreed a Slovak member of the film crew, lounging near several large camera booms which nodded in the wind beside gleaming technical equipment piled at random on the grass.
"This is a good job," whispered a Slovak driver, keeping warm in a truck parked alongside another dozen vehicles on the autumn mountainside. 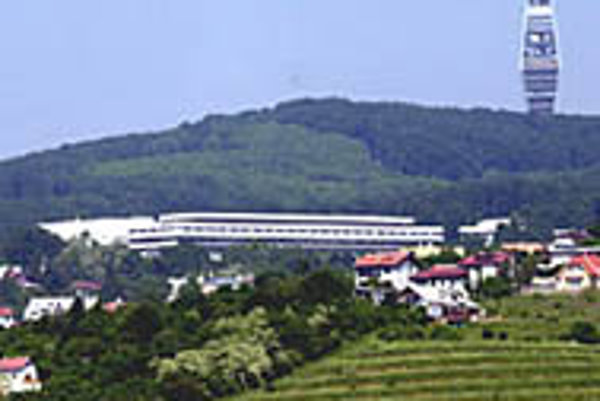 Font size:A-|A+  Comments disabled
MALÁ FATRA: "This is a miracle," gushed the attractive blonde Slovak businesswoman, poised in a remote locale in the Malá Fatra mountain range. In front of her on a meadow between two mountain peaks sat two large green army tanks, flanked by a sizeable herd of camouflaged men.

"This is big time film making," agreed a Slovak member of the film crew, lounging near several large camera booms which nodded in the wind beside gleaming technical equipment piled at random on the grass.

"This is a good job," whispered a Slovak driver, keeping warm in a truck parked alongside another dozen vehicles on the autumn mountainside.

"That was excellent. That's a wrap," boomed the red-bearded Irish director, striding out from behind a video monitor to set up the next shot with a cloud of advisors and assistants trailing in his wake.

Regular vistors to this remote northern Slovakia mountain range they were not, but all were part of the scene on day 12 of shooting for the 20th Century Fox film Behind Enemy Lines.

Odd contrasts abounded. Hollywood in the Slovak backwoods. A fictional army of soldiers and actors waging a film industry campaign with a real army of professionals and support staff. A potential economic windfall for one of Slovakia's poorest industries.

"It's going real well so far," said the action film's rookie director John Moore, who got his start making TV commercials in England. "It's been fantastic working in Slovakia."

Behind Enemy Lines, the first major foreign movie to be shot in Slovakia since the action film The Peacemaker in 1996-97, tells the story of an American pilot shot down by Serb paramilitary during a reconnaissance flight in Bosnia.

"We couldn't very well shoot it directly in Bosnia," said producer Stephanie Austin, explaining the decision to come to Slovakia. "We needed to find something similar to the countryside there."

Production on the film began October 16 and is scheduled to conclude by the middle of December. Aside from a location in the Malá Fatra mountain range near Martin, shooting will take place at Koliba studios in Bratislava, as well as in and around the eastern Slovak metropolis of Košice.

"So far we're on schedule and everything's great," said Austin. "The crew is wonderful and we're having a great time. It's going to be a hell of a movie."

Koliba Studios in Bratislava, Slovakia's only major film studio, is in addition to stages providing 20th Century Fox with office space and support staff for Behind Enemy Lines, which employs roughly 300 people, over half of whom are Slovak. The Slovak armed forces are providing tanks and real-life soldiers for the shoot.

Although Austin refused to disclose the price tag for filming the movie on Slovak soil, insiders describe it as a big-budget Hollywood production. The film will star American actors Owen Wilson (Armageddon, Shanghai Noon) and Gene Hackman (Hoosiers, The French Connection, Unforgiven), who arrives in Bratislava later this month. Koliba studios described the film's expenditures in Slovakia as considerable.

While the mountain scenery may have been just what they were looking for, without the efforts of Koliba studios in Bratislava, executives at 20th Century Fox may have never even considered Slovakia as a shooting site.

"I went to Hollywood in February and March last spring and basically just went around knocking on doors," said Iveta Hrdlovičová, director of production services at Koliba studios. "I got my hands on the script for Behind Enemy Lines and then came back to Slovakia and did some scouting. [20th Century Fox V.P] Jim Dodson came for a visit, and then made the decision to come here in July."

Hrdlovičova's trip was part of an effort to revitalise Koliba studios by what were then new majority owners. Despite the successful completion of three big-budget foreign films (The Peacemaker, Dragonheart, Kell the Conqueror) in Slovakia in the mid-1990s, other films didn't follow and Slovakia's only major studio, which was privatised under suspect circumstances in 1995, slid into disrepair. Charges of asset stripping and fraud culminated earlier this year when the Slovak Culture Ministry began a lawsuit against the studio's former owners to recover money given to Koliba in 1997 and 1998 for two films that were never finished.

Hrdlovičová declined to comment on Koliba's woes before her arrival, but said that when she had been hired at the beginning of this year the situation was critical. "Water and heat no longer worked because the studio couldn't pay its bills. The amount of debt was incredible. Roofs were leaky. In general, Koliba wasn't functioning," she said.

With the decision to film Behind Enemy Lines in Slovakia, owners at Koliba hustled to get their studio back into working shape for the arrival of crews from abroad in September. Now Hrdlovičová is looking to attract more foreign films to keep the ball rolling.

"We are planning a big promotion to get foreign filmmakers to come to Slovakia," said Hrdlovičová, who is going back to the US to knock on more doors later this month. "Building a strong film industry in Slovakia would be good for the entire economy, not just for our studios. Film crews spend a lot of money on transportation, accomodation, food."

Aside from the beautiful countryside, low costs also make Slovakia attractive to foreign film studios. Some industry insiders have said that sets in Slovakia can cost as little as one tenth of those in Hollywood.

"I first brought a movie here because we had a lot of money for talent and very little for production," said the film's production supervisor Thomas Karnowski, who produced four small-budget independent films in Slovakia in the late 1990s. "I think American studios are now starting to see the potential in Slovakia."

"I think the film industry in Slovakia is going to take off," agreed retired naval captain David Kennedy, who works on Behind Enemy Lines as an advisor. Aside from lower costs, Kennedy said that high quality craftsmanship was another bonus to working in Slovakia. "The locals here do great work. The set they've built at Koliba [of an aircraft carrier] is incredible. It'll be a shame if they tear it down after we've finished."

According to those on the shoot scene, the main drawback to shooting in Slovakia is that few local firms exist to support the film industry. "Right now, for example, we still need to get film and certain equipment from abroad," said Austin. "It takes years to build up a good infrastructure to support film. Slovakia is a little like Prague was eight years ago, or Toronto, which only started shooting films about 20 years ago."

Hrdlovičová said she hoped smaller companies, such as casting and wardrobe firms, would appear once more business from abroad started to arrive. "Slovak filmmakers alone don't have enough money to support those kinds of businesses. If foreign firms created a demand, it would be good for the local industry as well."

Behind Enemy Lines has, as yet, no release date. Editing will last at least six months after shooting is finished in December. But enthusiasm on the set is high, and everyone is predicting a hit.

Executives at Koliba, meanwhile, are hoping that it won't just be a hit, but the beginning of a beautiful friendship with Hollywood.