On June 12, eight days before World Refugee Day, Slovak border police launched a river search for 20 Indian refugees who had attempted to cross the Morava river into the Czech Republic.
Two days later the search was called off. Three people had been found alive, the rest were presumed drowned.
Brought from India via Moscow to Slovakia, each of the 20 had paid $8,000 to a group of body-smugglers promising to ferry them to the West. But outside Bratislava, the group was abandoned by the smugglers, and chose to risk the waters. 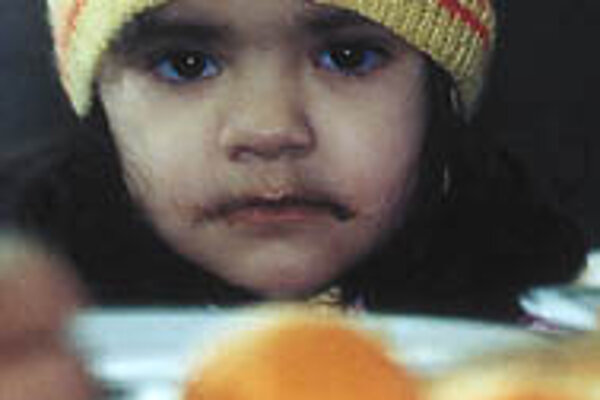 Two days later the search was called off. Three people had been found alive, the rest were presumed drowned.

Brought from India via Moscow to Slovakia, each of the 20 had paid $8,000 to a group of body-smugglers promising to ferry them to the West. But outside Bratislava, the group was abandoned by the smugglers, and chose to risk the waters.

The tragedy was not the first of its kind in Slovakia, and, says both the United Nations High Commission for Refugees (UNHCR) and the Slovak Migration Office, is unlikely to be the last.

"I hope that these tragic incidents will stop, but the numbers of immigrants coming to Slovakia and going to the West is growing all the time," said Bernard Priecel, head of the Migration Office at the Slovak Interior Ministry on June 26.

Seen as a 'transitional' state, many refugees pass through Slovakia on their way to the West. Yet few stay: high unemployment - nearly 20% - and a standard of living that is 50% lower than in EU countries (except in the capital) have little lure for many refugees, says the Interior Ministry. Coupled with the prospect of large benefit payments in countries like Britain, many move on, risking the fate that befell the Indian group.

In October 1998, three Afghans also drowned in the Morava attempting to escape to the West. Four months later, six Sri Lankans migrants were killed when hit by a train. And in September last year, a 17 year-old boy from India, smuggled into Slovakia in the back of a truck, was found dehydrated and suffering from an infectious disease. He died in Trenčín hospital before doctors could fly in medicine from Germany.

To keep out the 7,000 illegal immigrants recorded last year, Slovakia has passed legislation preventing entry to some foreigners, especially those from the former Soviet Union. But not all arriving in Slovakia try to head West, or at least not immediately. Many refugees apply for asylum, and are housed in the country's three refugee camps.

With Slovakia seeing a huge rise in the number of asylum applications since 1998, the camps are struggling to cope.

"I've been to Macedonia and seen the refugee camps there, and I have to say that it's currently worse here," said Mária Čierna, the UNHCR's public information officer in Bratislava, explaining the situation at the Brezová pod Bradlom refugee camp in western Slovakia. "I always thought that conditions for refugees here were good, but I was really surprised by the conditions in the tents. Capacity is getting to be a real problem."

The government has had to erect tents at the camp, sleeping 25 people in each one, to deal with the rising numbers. In the first five months of this year alone, 1,792 people requested asylum in Slovakia, a significant jump from the total of 1,556 in all of 2000, and the 1,320 in 1999. Nearly half of those refugees are from Afghanistan (883).

The Interior Ministry has said that it expects the trend of more refugees arriving in Slovakia to continue. Those running the cramped compounds have welcomed government plans to build a fourth camp in eastern Slovakia.

However, the state's plans have run up against what the Migration Office's Priecel said was a "massive problem" - growing discontent among Slovaks with the presence of refugees.

"We've got a problem with building it because the municipalities [where we wanted to build the sites] won't give us permission," he said. "They don't understand the idea that one state has a duty to provide help for people from other states.

"Also, most of the problems with crime in Slovakia are connected with foreigners, as in many other countries, and people think that the refugees will steal," he said.

A poll carried out by the Focus polling agency May 29 showed that while 67% of the respondents thought refugees should be provided humanitarian help, 73% said that refugees in Slovakia cost the government too much money and contributed to an increased crime rate. Just over 60% said the refugees carried disease, and 51% thought they should be sent to another country. The same amount argued that refugees took jobs away from Slovaks.

The results suggested a marked shift in Slovak society's view of migrants: a 1998 poll saw 78% supporting help for refugees, and 57% saying that they thought refugees increased the crime rate.

"Slovakia has enough economic problems of its own that we can't go giving the money away to feed and clothe all these people," said one retired woman in Bratislava, who refused to be named for this article. "I've also heard that they steal."

The results of the survey were a disappointment and a surprise for the UNHCR, but not the only problem for refugees in Slovakia. A difficult and lengthy asylum process, said Čierna, also forced disheartened refugees to head further westward.

"The process is extremely long. An asylum case can take between three months and two years, sometimes even longer," she argued. "And then there are people in the camps who learn from others there that there's little hope of being granted asylum, and they leave - there's so much hopelessness and despondency."

Workers at the camp agree that many leave. Seeing friends or family move on often convinces them to follow, regardless of progress on their asylum applications. "People leave. It happens all the time, it's normal," explained Štefan Kovačech, head of the Brezová camp.

The Migration Office, though, argued that the process took no more than one year, and that the number of people granted asylum compared to those who see the process through has stayed at the same level for years, at just over 10%. Some 890 of the nearly 1,800 who have filed for asylum this year have left the refugee camps before the end of the process.

"I don't like to hear people saying that refugees leave Slovakia because they don't receive asylum. Simply, many aren't interested in staying in this country. Slovakia doesn't have a living standard that would be attractive for economic refugees," said Priecel.

Nevertheless, says the UNHCR, the number of people being given asylum is unacceptably low.

"I know we cannot expect Slovakia, with its current socio-economic problems, to grant hundreds of asylum seekers their wish, but the number who get it is too small," said Čierna. "Since 1992, 6,916 people have applied for asylum. Only 499 have received refugee status. This year, out of 1,792, only one person has been given asylum.

"The numbers are too low when compared with who has applied... there have been too many rejections."