"I'm just a small Dutch businessman here running this water cooler installation business and I don't like too much publicity," said Pieter Jägers, hesitating to agree to a profile.
The initial reaction is misleading. Four days later, sitting in his office at Dolphin Slovakia, a 14 employee strong subsidiary of the Dutch firm Dolphin, which he has headed for more than a year, he is immediately more open, and willing to expound on the virtues of management psychology, the excitement of the post-Communist world, and the human face of the often maligned Slovak state official. 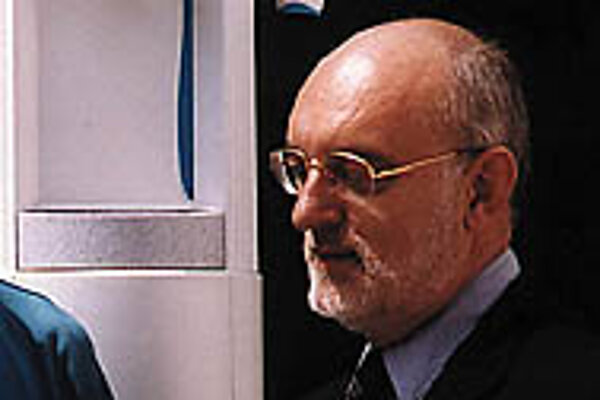 "I'm just a small Dutch businessman here running this water cooler installation business and I don't like too much publicity," said Pieter Jägers, hesitating to agree to a profile.

The initial reaction is misleading. Four days later, sitting in his office at Dolphin Slovakia, a 14 employee strong subsidiary of the Dutch firm Dolphin, which he has headed for more than a year, he is immediately more open, and willing to expound on the virtues of management psychology, the excitement of the post-Communist world, and the human face of the often maligned Slovak state official.

Now 55 years-old, Jägers accepted an offer from the Dutch government in 1990 to come to Czechoslovakia and develop a concept for small and medium-sized enterprises, as well as conduct training programmes for managers.

Armed with a degree in management psychology and 20 years of experience in training staff at various Dutch companies, Jägers accepted the offer, excited about changes in the former communist bloc.

"It was all fascinating. I would have never dreamt that I would once go to eastern Europe, but suddenly a new world opened. I wanted to see it and experience it. I like playing pioneer," he says, his voice rising excitedly as he recalls the experience.

But though he learnt a lot from meeting and working with local managers at training sessions, he found consulting wasn't completely satisfying, and accepted an offer to set up Dolphin in Slovakia.

"I wanted to develop something that had longevity, consulting was just a short term thing," he said.

His qualifications in management psychology have served him well at Dolphin. Conducting a meeting at his company's board, he looks to encourage, he says, and develop ideas. Anytime one of his younger colleagues suggests an idea or a new plan, his normally flat voice raises pitch.

"My way of managing is to encourage people and let them say things before I say them, although I already know the answer. Sometimes I have to push them to come up with ideas," he says. "We have to hit the summer season when more water is drunk, how can we get more customers?" he turns to his staff, soliciting ideas with a glance.

He has earnt the admiration of his fellow workers for doing so. "He knows what his aims are and he encourages others to think the same way," said Jäger's operation manager Róbert Šajty.

He also commands the respect of his countrymen in Slovakia. "He is prudent in decision, and he is experienced in the country. He has good contacts, and certainly knows how to do things," said Anton Van Beek, president of the Netherlands Chamber of Commerce in Slovakia.

But not everything can go his way in business, despite his skills. He admits that while his company is doing well - it reported a loss of 3.5 million crowns in its first year of operations, dropping to a projected 1.5 million crowns this year, and hopes to break even in 2002, two years ahead of the normal timescale for firms like his - getting credit to finance expansion is hard work in Slovakia.

"We want to develop some sort of regional base here and plan to set up business in Slovenia, Hungary and the Czech Republic in 2003, so before that we have to be fine financially here. But we would break even sooner if capital for small businesses was available in Slovakia.

"I dare say that we are a solid firm, but we have to be financed from our Dutch resources because banks in Slovakia don't give loans to companies less than two years old," he sighs, before adding: "Not that banks in the Netherlands would wait for businesses with suitcases full of money, but it is much easier to get money from them."

The state face of humanity

On meeting Jägers it is hard to believe that the temper of such a mild-mannered man would ever boil over into frustration and anger. But he admits that at times he has lost his cool with some people.

The targets of the rare outbursts are state bureaucrats. Many investors, especially smaller ones, say they find themselves up against a brick wall when trying to do business in Slovakia. Going to any number of different offices, filling in what he says are useless forms, often makes life unnecessarily complicated for small businesses, he explains

"Those people in those offices have this!" he exclaims, putting his hands on the sides of his head and stretching his fingers to visually demonstrate the narrow-minded approach he encounters from the state administration workforce.

"There are moments when I curse, I say 'to hell with them all', but then I am quiet for a while and don't think about it. I learnt to do it this way because then one's ego doesn't win out over one's creativity. It is necessary to find how it works and then adapt," he says more calmly.

"In The Netherlands, we see them as servants. I have the right to complain and am not questioned for doing so. The concept can work in Slovakia with every state-official. All of them are human beings," he said, going on to recount a recent incident with a Slovak policeman who stopped his car and asked whether he had been drinking.

"I said yes. 'I had a glass of wine,' I told him. And he asked 'why did you tell me this? 'Because my mother told me not to lie'. He stared at me for a few seconds, and then just said 'move on'."

His frustration with, but ultimate acceptance of the problems of doing business in Slovakia, is, one other businessman says, typically Dutch. "It would be stressful to take all those bureaucratic barriers seriously. Just take them with a pinch of salt as something one has to get through. I do it too because I am also Dutch," said Gerard Haikens, manager of a small manufacturing firm in western Slovakia.

But what is it that ties Jägers to Slovakia? A love of the country? A zest for business? Or the challenge of dealing with problems?

"I'm here because the market potential is enormous, there are a lot of opportunities for business and there have been a hell of a lot of things achieved over the last 10 years." He pauses. "Also, the Slovak woman I met in 1995 was a big incentive for me to stay."

He devotes his free time to the same lady, in between playing with his dog, and, as an avid shopper, touring the growing number of hypermarkets around Slovakia.

"But I also like to have a nice chat with friends, and just coincidentally bump into them in the centre of Bratislava and go for a Belgian beer in my favourite pub - De Zwaan. I am a moderate drinker and enjoy these kinds of meetings.

"All this said, I see myself here in the near future."