Slovakia is ever more often becoming a fishing ground for foreign companies seeking to recruit cheap workers to compensate for labour shortages in their own countries.
Bratislava's Echo Hotel on June 28 was the scene of the latest recruitment drive. Three mid-management officials from Dublin's Four Seasons Hotel interviewed about 100 Slovaks between the age of 20 and 35, looking for new staff to work for them in Ireland.
Such recruitment efforts by western firms are on the rise not only in Slovakia but across the central and eastern European region, human resources experts and firms involved in mediating work abroad said after the Four Seasons event. 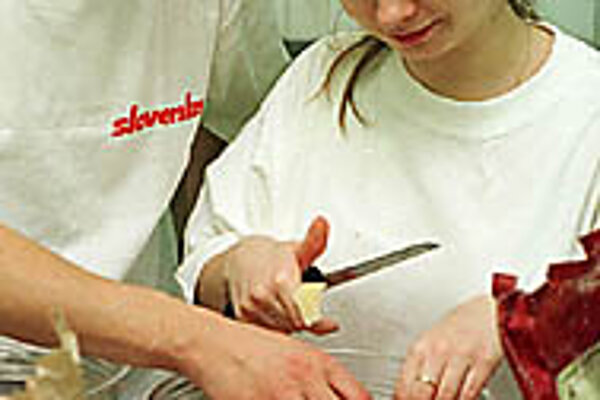 Font size:A-|A+0
Slovakia is ever more often becoming a fishing ground for foreign companies seeking to recruit cheap workers to compensate for labour shortages in their own countries.

Bratislava's Echo Hotel on June 28 was the scene of the latest recruitment drive. Three mid-management officials from Dublin's Four Seasons Hotel interviewed about 100 Slovaks between the age of 20 and 35, looking for new staff to work for them in Ireland.

Such recruitment efforts by western firms are on the rise not only in Slovakia but across the central and eastern European region, human resources experts and firms involved in mediating work abroad said after the Four Seasons event.

"I've recently seen a German [government] document which talked about a plan to hire about 50,000 people from foreign labour markets, mainly in the IT [information technology] business," Novotný added.

A March 2001 survey by human resources (HR) firm TMP Worldwide polled 350 senior business managers across Europe in the technology, financial services, leisure, manufacturing and telecom sectors; the poll found that western European recruitment executives have embraced the strategy of coming to post communist countries to hire workers for their operations.

The reasons, according to HR experts, is the comparatively high level of unemployment in post communist countries, combined with a labour shortage in certain industries in western states.

Four Seasons Hotel representatives said that they had come to Bratislava for this very reason. "We [Ireland] presently have only 3.6% unemployment," Gerard Denneny, a director with Four Seasons Hotel, told The Slovak Spectator June 28.

"We have been encouraged by the quality of people we met [in Slovakia], their desire to work and their flexibility and willingness to relocate," he said, adding that he viewed the region as a rich source of labour for western companies.

Denneny is not alone in his belief. The TMP survey claimed that while "80% of respondents recognised that skill shortages have adversely affected their business", of those, "78% believe that cross-border recruiting will ease the problem".

Labour experts say that booms in the West in technology-based industries, such as IT and telecoms, have created a massive demand for skilled workers which western economies cannot always meet. Because of this, western companies, in some cases supported by their governments, have drawn up expansion plans targeting recruitment in central and eastern Europe.

Four Seasons' Denneny predicted that other Irish firms would soon follow his company's example and come to Slovakia to help swell their workforces.

"It's already happening in the hotel sector, and I'm sure it will become more frequent as the Irish economy continues to grow and [it] requires more people to fill the positions available."

Local firms who organise work for Slovaks abroad agreed with the assessment, but argued that the availability of labour was not the only force behind western firms' growing interest in Slovak labour.

"It's a mutually advantageous business. These firms are looking for a cheap labour force, which is easy to find here," said Zuzana Čechvalová, head of the Sapa au-pair agency, which also arranges seasonal work opportunities for Slovak students in western Europe and the US.

She added that she expected more foreign firms to begin recruiting Slovaks for work abroad.

Faced with a jobless rate that is among the highest on the continent, Slovakia's youth, particularly university graduates, are considering job opportunities outside their home country.

Applicants The Slovak Spectator spoke to at the Four Seasons recruitment day explained that local joblessness had led them to the Hotel Echo.

"There aren't any opportunities of reasonable work for young people in this country," said one young girl waiting quietly with about a dozen of her peers to be interviewed. She, like the rest, was busy filling out an application form before her half-hour meeting with a Four Seasons manager.

Another job candidate, 22 year-old Michaela from Nitra, added that unemployment was not her only motivation for seeking work abroad.

"It's not about money, or about making a big career abroad," Michaela said. "For me this is just a perfect opportunity to live and work in a foreign country, to get to know the people and gain some experience from working abroad."

HR experts and heads of recruitment at many international firms in Slovakia have argued that Slovaks can benefit from working abroad, enhancing their job skills working in a western corporate environment, and at the same time making their CVs more impressive for potential employers when they return home.

"There is a definite advantage to going off and spending some time abroad," said Vanda Šinková, a manager at advisory firm Pricewaterhouse Coopers, and one of the chief co-ordinators of PwC's own HR programme which sends Slovaks to work abroad.

"One of the main things is that it gives people an experience of a different country and allows them to learn a set of new skills. And the fact that people go and work abroad and then return with new skills has a definite positive effect on the labour market. It's a good thing in general for Slovak HR, and it increases the quality of the local market," she said.

Four Season's Denneny said that his firm had been very impressed by the candidates' abilities, and suggested that this would not be his hotel's last recruitment trip to Slovakia.

"It's very likely that we'll be back here to recruit more Slovaks for our hotel next year," he said.