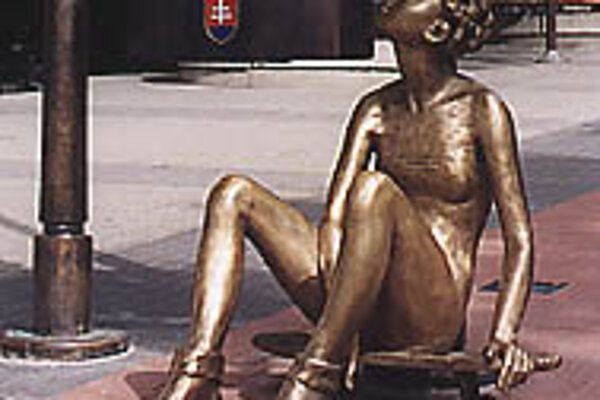 When Mail Box #1, a sculpture/mailbox on Bratislava's refurbished Poštová Street, was officially unveiled April 30, town dignitaries were surprised to discover that mail had already been deposited inside.

Since then, the sculpture of two young ladies draped on and next to a post box has collected hundreds more letters and postcards - and become a popular photo opportunity for tourists, nearly as large an attraction as Čumil, Bratislava's enigmatic man-in-the-manhole on Panská Street in the Old Town district of the capital.

"Mail Box #1 is not as well-known as Čumil," said Old Town spokesman Milan Vajda. "But it's becoming comparable."

Those who admire Mail Box #1 may wish to walk another 100 metres this month to Dielo Centrum café on SNP Square, which is exhibiting 20 other sculptures by Ladislav Sabo, Mail Box #1's creator. Several of the pieces in the collection are also for sale.

The traits that make the female figures of Mail Box #1 memorable - long, supple limbs, stoic expressions and easy postures - run through most of the figures in Sabo's work. All sculptures on display at Dielo Centrum are likewise made from bronze, although they are smaller than Mail Box #1, most about the height of a toddler, and on the whole more experimental.

Sabo's most provocative work detaches the body parts of his lithe figures and reattaches them in imaginative ways. In the subtle Sen 1 (Dream 1), a lower body is supported gracefully on the shoulders of a torso, whose arms are outstretched plaintively. An exhilarating unnamed piece joins two upper bodies at the waist, with heads at opposite ends, and balances the contrivance like a see-saw over a lower human half.

Čert (Devil) is the collection's most striking piece. Here, Beelzebub is a cross between human and insect, poised on two ambling human legs, suggesting that the Devil is prepared to spring forth from man at any moment.

The exhibition also comprises two sculptures entitled Adam and Eve - in the first a serpent divides man from woman, in the second it binds them together - and the blueprint for Mail Box #1 (Škica na poštovú schránku - sic). Whether treating religious themes, dismembering bodies, or making post boxes, Sabo portrays the human body with an elegance that lends his work a subtle aura of optimism.

But what may turn out to be Sabo's best known work is the singular Mail Box #1, on display without charge every day on Poštová Street.