MAGNEZITOVCE - "The immediate cause of death was post-trauma shock caused by serious internal injuries: advanced brain swelling, bleeding into the brain, multiple skull fractures, bleeding into the chest and abdominal cavities, a ruptured liver and lungs."
Thus read the autopsy report on 50 year-old Slovak Roma Karol Sendrei from this eastern Slovak village of 450.
Sendrei died at 7:15 in the morning of July 6 in the Revúca District police station about 12 kilometres from his home; he had been handcuffed by police the night before to an iron bar above his head. He died in front of two of his sons, who had also been handcuffed to the construction. His murder has shocked Magnezitovce residents, and has drawn horror from as far away as European Union headquarters
"It is clear that his injuries were caused by a second party," the autopsy report concludes. However, in the wake of Sendrei's murder and the outcry it has caused, the key question remains not why Sendrei died, but who killed him - and with what motive. 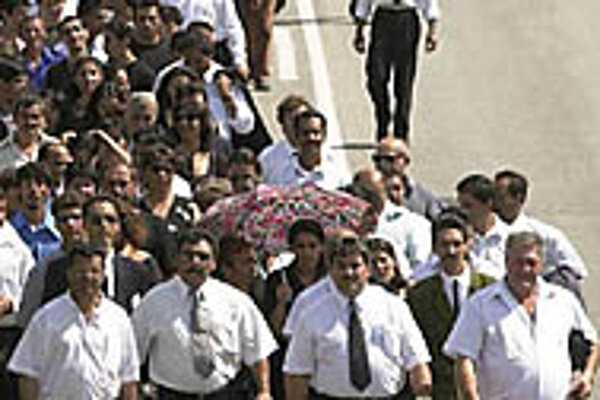 Font size:A-|A+0
MAGNEZITOVCE - "The immediate cause of death was post-trauma shock caused by serious internal injuries: advanced brain swelling, bleeding into the brain, multiple skull fractures, bleeding into the chest and abdominal cavities, a ruptured liver and lungs."

Sendrei died at 7:15 in the morning of July 6 in the Revúca District police station about 12 kilometres from his home; he had been handcuffed by police the night before to an iron bar above his head. He died in front of two of his sons, who had also been handcuffed to the construction. His murder has shocked Magnezitovce residents, and has drawn horror from as far away as European Union headquarters in Brussels.

"It is clear that his injuries were caused by a second party," the autopsy report concludes. However, in the wake of Sendrei's murder and the outcry it has caused, the key question remains not why Sendrei died, but who killed him - and with what motive.

Sendrei's sons, who were eye witnesses to their father's last hours, say that their father was beaten by the Revúca police. "They beat us for 12 hours straight while we were cuffed to that construction," said Róbert Gunár, who is Karol Sendrei's stepson.

However, the police tell a different story. While admitting they handcuffed the three Roma to the iron bar, as one officer explained July 10 "to let them dry out" from the alcohol they had consumed, they say the Roma weren't maltreated.

According to Revúca police chief Marián Jankovič, Karol Sendrei's death was caused by Andrej Hudák, the newly-elected mayor of Magnezitovce, and his 26 year-old son Ondrej, who is a policeman with the nearby Jelšava force. Jankovič said that the Revuca police had on July 5 simply broken up a vicious fist-fight which was in progress between the Hudáks and the Sendreis, and that Karol Sr. died of wounds sustained before he ever reached the police station.

The truth may in the end lie with a doctor with the Revuca hospital who examined Sendrei and his sons when they were taken by police for a medical examination following their fight with the Hudák family. According to Banská Bystrica investigator Ján Krankuš, the doctor - who refused to be interviewed by The Slovak Spectator, or to give his name - had taken only head x-rays, stitched up a few cuts, and sent the men on for police interrogation after declaring they suffered from only minor injuries.

The tragedy took place in a town whose 445 citizens, in numerous interviews with The Slovak Spectator July 10, prided themselves on the model of coexistence between Roma and the 'white' Slovak majority they set for the rest of the nation. About 30% of the village inhabitants are Roma, said municipal officials; nevertheless, Magnezitovce has no Roma ghetto, as many other eastern Slovak villages do, and no serious unemployment problem, with a nearby mine still operating.

"The only problem we had was caused by the Sendrei family - not because they are gypsies, but because they were so prone to violence," said a 72 year-old white village resident who asked not to be identified.

The Revúca police and Magnezitovce village council members The Slovak Spectator spoke to claimed that of Karol Sendrei's four sons, Karol Jr. had been several times convicted of theft and assault, Peter was "known" to be a money lender, and Róbert to be an aggressive troublemaker who was fond of drinking.

Following the events of July 5, Peter Sendrei and Róbert Gunár are in Rožňava hospital; Peter has a ruptured kidney and is to receive dialysis treatment, while Róbert has a brain swelling, dozens of stitches in his head and a body dark with massive bruising. Peter, Róbert and Roman are all charged with trespassing and attacking a public servant.

On the other side of the street there is Andrej Hudák, who was only elected mayor June 30 by Magnezitovce's white and Roma populations, and his son Ondrej, who was hired by the Jelšava force last December. Both have been charged with assault causing death; Ondrej has been fired from the police force, while his father has resigned as mayor.

Two other Revúca policemen - Miroslav S. (30) and Ján K. (24) - have been charged with assault and abuse of power for their roles in removing the Sendrei combatants from the fight scene at the Hudák house.

According to pub regulars, Peter Sendrei and Róbert Gunár frequently caused violent conflicts in the village's only pub, and July 4 had been no different. While none of the men could remember why a conflict had arisen on that particular night, they claimed that Róbert Gunár, in an apparently intoxicated state, had broken a glass ashtray over the head of a fellow pub patron named Dušan K. The latter had gone home and called the police, and Ondrej Hudák had responded to the call - as he had so many times in the past when the Sendrei brothers were creating a disturbance.

"I guess fate just had it in store for Ondrej that he always be on duty when the Sendrei brothers were causing problems," said a 35 year-old white village resident, adding that the frequent clashes between policeman Hudák and the Sendrei brothers had fuelled long-standing animosity between the families.

On July 4, when Ondrej Hudák responded to Dušan K.'s call, Róbert Gunár was already at home in bed. People who say they witnessed the incident say that Hudák hauled Sendrei out of his home, and "in front of screaming kids and women gave him a brutal beating."

A 50 year-old village dweller recalled that on the morning of July 5, Róbert Gunár had begun shouting in public that he was going to kill Ondrej Hudák. "In the past he had chased people in the village with an axe, so we knew his threats had to be taken seriously, and we warned the mayor," the resident said.

But before Róbert Gunár could make good on his threats, his father paid a visit to the mayor in the late afternoon to complain of the younger Hudák's beating of his son. "He went there in peace, he just wanted to ask why Róbert had been beaten like that," said Blažena Sendreiová, Karol Sendrei's widow.

At this point, in the witness accounts, the memories of the white and Roma onlookers begin to diverge, with the white Slovaks who saw the ensuing encounter saying that Karol Sendrei was "aggressive and drunk". However, all agree that Mayor Hudák struck Sendrei in the face after the latter entered his front yard, and that Ondrej Hudák, off-duty and returning from a work-out at the gym, joined the fracas and began beating Karol Sendrei as well. Then the mayor's wife says she called the police, while Mayor Hudák held the elder Sendrei down to prevent him from escaping.

Blažena Sendreiová remembers the horror she felt when she heard her husband was being beaten up by the Hudák menfolk. "The neighbours told me he was being beaten, so I ran over there with my sons," she remembers. "When we got there, my husband was lying on his stomach. His head was covered in blood, and he didn't have a tooth in his mouth. I wanted to take him home, but the mayor wouldn't let me, he said we had to wait for the police."

The Sendrei sons added that they had then broken down the mayor's fence and entered the fray after he had threatened to kill Karol Sendrei.

Blažena Sendreiová adds that when the Revuca police arrived, they had begun beating Róbert Gunár and Peter Sendrei with their night sticks. "They beat them, in front of people and children, they kicked them in the heads and backs. Then they put them all - my husband half-dead - into the back of the car and left."

For some Magnezitovce Roma, the case is clear - Karol Sendrei received his mortal wounds during the encounter at the mayor's house. But for the white community, which has got up a petition in support of Hudák Sr., and for at least half the Roma, it was the police who must have inflicted the main damage.

With Interior Minister Ivan Šimko promising to take personal charge of the investigation, and the government releasing a statement expressing "profound sorrow" at the incident, the court system is under tremendous pressure to act quickly and decisively.

But the July 10 funeral for Karol Sendrei was not attended by a single cabinet member, and the 200 Roma in the funeral cortege made promises ranging from passive resistance of racial discrimination, to emigration and complaints lodged at international courts.

Whoever killed Karol Sendrei, one thing is sure - Magnezitovce's prided racial harmony has been irreparably damaged.

"The whites trample on our human rights, they put us down. We want to leave this country," said a 56 year-old Roma who called himself Samko.

"Let the European Union take our gypsies. We'll even pay them to do it," said Samko's 50 year-old white neighbour.