Investors call on government to put promises into practice

The top 15 foreign investors in Slovakia have told the government that while it has made great progress in passing laws to create a positive business climate for investors, it must make a greater effort to ensure those laws function properly in practice, especially at local government level.
Speaking after a round-table meeting with the heads of the biggest investors in Slovakia, Prime Minister Mikuláš Dzurinda said July 9 that "while there is general satisfaction among investors with the steps the government has taken [to encourage investment], what I have heard today is that we must ensure that these are put into practice".
"After agreements reached with the central government, investors find it difficult to fulfil these agreements with [local public administration] offices," he added. 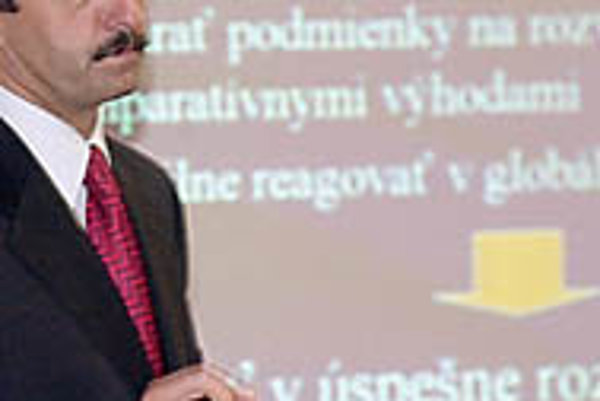 Font size:A-|A+0
The top 15 foreign investors in Slovakia have told the government that while it has made great progress in passing laws to create a positive business climate for investors, it must make a greater effort to ensure those laws function properly in practice, especially at local government level.

Speaking after a round-table meeting with the heads of the biggest investors in Slovakia, Prime Minister Mikuláš Dzurinda said July 9 that "while there is general satisfaction among investors with the steps the government has taken [to encourage investment], what I have heard today is that we must ensure that these are put into practice".

"After agreements reached with the central government, investors find it difficult to fulfil these agreements with [local public administration] offices," he added.

Chiefs of firms such as Coca-Cola Slovakia, Volkswagen Slovakia, IBM and German technology giant Siemens participated in the round-table. They said after the discussions that they had reiterated to the government their frustrations with having issues linked to investment - such as the issuing of work permits, and securing land quickly - falter at the level of local government.

They also called on the government to widen the purview of the state's investment agency, SARIO, to allow it to play a larger role in dealing with problems during and just after a foreign firm's investment into the country, and in mediating with local government offices.

"It's any government's job to introduce legislation to make investment easier, but when it comes to implementation of that legislation, what happens is that by the time it gets to the lowest person at the lowest level, in all countries, you have a problem," said Gabriel Eichler, former head of east Slovak steelworks VSŽ and a moderator at the talks.

"It was at this level that most of the investors [at the talks] felt that in issues like getting work permits and so on, even though the legislation is in place it takes months and months, and also at the level of local administration it's nice that the government passes legislation, but when it gets to local and regional administration levels things just don't get done."

He added: "This is where the issue of SARIO comes in. These investors said that they would like to go to SARIO and say 'look, I'm having a problem, can you help me?' and not have to go to all the ministries individually. What would help with these problems is to give SARIO more of a mandate to help investors [deal with local administration]."

Head of SARIO Alan Sitár agreed. "We feel there has been inceased responsiveness from local administrations to investors' requests, but there is still room for improvement. SARIO could be a catalyst for this improvement.

Western investors' frustrations during and after investments lie largely with what they claim is infuriatingly inflexible bureaucracy, almost all at the level of local government.

Erico Biondi, head of washing machine-manufacturer Whirlpool Slovakia, which is planning to expand its existing facilities in Poprad, said that after concluding negotiations with central government representatives on the expansions, the company has had to spend the last 12 months dealing with local land owners and local governments to secure land and permissions to begin construction.

"It's a real problem for foreign investors to put promises into practice. The government cannot leave a foreign company alone to face state bureaucracy and deal with land ownership," he said.

Legislation on reform of public administration that should give more powers to local governments was passed June 4. Deputy Prime Minister for Economy Ivan Mikloš, also at the round-table meeting, suggested that the reform would have a positive effect on doing business in Slovakia.

"The reform will help business because it will give more powers and influence to local and regional self-governments which are closer to people and the market and their needs," he said.

But with the exact competencies of the new local administrations still not clear, some investors expressed doubts as to what they could expect from the reform, and said the central government must continue to work hard on legislation to help avoid problems at the local level.

"We have very good co-operation with the local government in [western Slovakia's] Malacky, where we have invested. But we are relying on a few individuals. Fortunately for us, they are good individuals, making sure that things are being pushed through. But the [central] government must continue to push hard.

"It's doing a lot, but for those investors following us, things are still taking a very long time, such as getting land ownership completed. That's why it's important to put laws like the one on industrial parks [passed June 2001 - ed. note] in place," said Emmanuel Mauduit, general manager of Plastic Omnium, which last year made a $52 million investment to provide VW with car parts.

They have singled out the passage of laws on the creation of industrial parks for investors - which allow investors to set up new facilities without the hassle of having to acquire land with unclear ownership - and a recent government-approved package of investment incentives giving 100% tax breaks for investors for ten years, as crucial.

"The government got a lot of FDI last year and will get more this year. More investment is coming, and foreign investors see that they can compare Slovakia to Hungary, Poland and the Czech Republic. In comparison, Slovakia fares well," said Regina Ovesny-Straka, chairman of Slovakia's largest bank, Slovenská sporiteľňa, owned by Austrian finance house Erste Bank.

SARIO admits the differing performance between Slovakia and its central European neighbours has been caused by, among other reasons, a failure to prepare legislation on industrial parks and offer equivalent tax breaks to those in other countries in the region, and what it says is "complicated and lengthy" legislation involved in foreign investors' founding of a firm.

Information released by the agency says that last year 34 investment projects failed to be carried through, depriving Slovakia of a potential 72 million euros of FDI and between 3,500 and 5,200 newly-created jobs.

However, the disparity in FDI between Slovakia and its neighbours should change with the passing of laws on industrial parks and tax breaks, said Deputy Prime Minister Mikloš.

"This legislation will put us on a comparable level with neighbouring states," he said.