SPP nears sell-off with past baggage

As the government readies itself to start the biggest privatisation in independent Slovakia's history, it has promised that despite delays and obstacles, the sale a 49% stake in Slovenský plynárenský priemysel (SPP), the leviathan of central Europe's gas market, is guaranteed to go through.
The world's second largest gas distributor is the crown-jewel of the state's companies. The 90 billion cubic metres that flow through its pipes every year - two-thirds of the gas imported into western Europe - have brought rich revenues to successive Slovak governments.
The sale of SPP is also seen as crucial to allowing the Slovak energy sector to compete in a liberalised European Union market (Slovakia hopes to join the EU in 2004), and will bring massive revenues to the state, possibly as much as $3 billion. 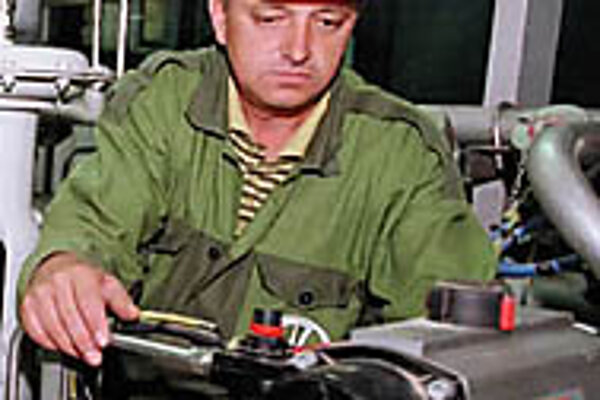 Font size:A-|A+0
As the government readies itself to start the biggest privatisation in independent Slovakia's history, it has promised that despite delays and obstacles, the sale a 49% stake in Slovenský plynárenský priemysel (SPP), the leviathan of central Europe's gas market, is guaranteed to go through.

The world's second largest gas distributor is the crown-jewel of the state's companies. The 90 billion cubic metres that flow through its pipes every year - two-thirds of the gas imported into western Europe - have brought rich revenues to successive Slovak governments.

The sale of SPP is also seen as crucial to allowing the Slovak energy sector to compete in a liberalised European Union market (Slovakia hopes to join the EU in 2004), and will bring massive revenues to the state, possibly as much as $3 billion.

But its very size and importance have made it one of the most contentious of state company sales. Vested interests, political links and the sheer immensity of the task have slowed the privatisation.

Originally slated for sale by the end of the second quarter of this year, the 49% SPP share finally goes on the block with an advert for a tender being published in international newspapers at the end of August. The privatisation is, sector experts say, not likely to be concluded before the end of the first quarter of next year, even if political decision-makers continue to support the deal. Robert Fico, head of the non-parliamentary Smer party and a member of a cross-party committee looking at the sale, has made clear he does not agree with the project.

A murky former management cadre has also thrown up the spectre of unknown debtors knocking at SPP doors to collect on huge promissory notes, a factor that could also delay the sale as agreements are reached between buyer and seller on covering past debts.

But the government says it is aware of the importance of the sale, not just for SPP but for the wider economy, and says it will push ahead firmly.

"SPP's sale is vital to the company's efficiency and the overall stability of the economy. It's going to be the largest privatisation in Slovakia ever, and it's important to get foreign investors; the company was misused by politicians in the past, and we need foreign managers to have control," said Vladimír Tvaroška, advisor to Deputy Prime Minister for the Economy Ivan Mikloš. "The privatisation of SPP will significantly decrease the possibility of political influence in the enterprise sector as a whole."

Suspicions around SPP's past management have lingered since the end of the Vladimír Mečiar government in October 1998. The former head of the company, Ján Ducký, a one time Economy Minister in the 1994-1998 Mečiar government, was shot dead outside his home in January 1999, after allegedly having signed as many as 36 blank promissory notes when running SPP.

Since Ducký's death, ostensible claimants have periodically appeared, claiming to have some notes in their possession. SPP is currently in a legal dispute with the Czech Union Banka over 350 million Slovak crowns ($7 million) in notes; the firm refuses to recognise their validity, claiming they were signed with fraudulent intent.

Such potential uncovered debts at SPP could be a problem, and one which must be dealt with, agree privatisation experts. Last year's sale of the telecoms fixed-line monopoly Slovenské telekomunikácie (ST) to Germany's Deutsche Telekom for one billion euros was hailed as a success, even though the past debts and promissory notes claimed by firms in dispute with ST could reach 500 billion crowns [$10 billion]. But while the sale agreement between the state and ST is confidential, it is believed that some form of agreement was reached to ensure that any such claims would be covered by the state.

The Slovak Supreme Control Office (NKÚ), a public money watchdog, is taking advantage of a recent change in legislation that has allowed them to carry out a full audit of SPP. But Jozef Stahl, head of the NKÚ, said that rather than just uncovering what may or may not have gone wrong at the company, the check will actually make its privatisation more transparent and smoother.

"Every investor must have an interest in what they are getting into, and our examination is independent, better than any audit a company could do," he said.

Nevertheless, an agreement on the promissory notes is expected to be worked into any contract with a foreign investor.

"There are a number of solutions to this issue, and it is an issue that will certainly be addressed and solved before the privatisation is complete," said Tvaroška.

Even if the issue of debts can be solved, that of gas prices and future market liberalisation will have to be addressed. Whoever wins the stake will take on a company that while still profitable - it recorded a four billion crown profit in 2000 - is losing money on domestic gas sales. The firm had a first quarter loss of 176.3 million crowns ($3.6 million) from January to March this year, and warned that unless price caps on gas were removed, future results would be little different.

Although the state has repeatedly raised gas prices in a series of economic austerity packages since it came to power in October 1998, and plans further hikes, a programme of price liberalisation will be key to the sale.

"The sale of SPP is bound to the future of sector liberalisation, and its privatisation will affect sales and infrastructure in the industry. The government has already started to liberalise prices, and further plans for liberalisation will be attached to the sale contract," said Martin Kabát, head of research at brokerage house Slávia Capital.

"No one's going to go into the sector knowing that they're going to make a loss on sales," he added.

Price liberalisation and debts can be worked on, say analysts and the government. However, ensuring a smooth privatisation process before the elections cannot. Advisors to the sale, Credit Suisse First Boston, have been quiet on exact timetables for the sale, but with elections only 14 months off, campaigning has already begun with the ruling SDKÚ's summer 'Blue Bus' tour. Experts say that real work on the implementation of economic plans will slow to a near-halt by June or July next year, meaning the sale process must start soon.

The issue of privatisation in a wider sense also came under discussion following an August 10 formal recommendation by the leadership of the ruling coalition Hungarian Coalition Party (SMK) that party members approve the SMK's departure from the government later this month.

But observers have dismissed any chance that the SMK may withdraw its support for privatisation projects along with its role in the coalition.

"Their withdrawal is unlikely to have any direct effect on privatisation plans," said Marek Jakoby, analyst at think-tank MESA 10.

The sale of SPP will not be put off, agreed Tvaroška, and government resolve to go through with the privatisation is strong.

"Some politicians may try to make political profit on [delaying] SPP privatisation, but there's no way they can stop it. The government has already said it will do it, I don't expect that view to change, and there is no discussion on the sale in parliament," he said.

Despite potential problems, the company has to date drawn the interest of some of the industry's biggest players. Two consortia have come out as ready for a head-to-head battle for the share - Ruhrgas, Gaz de France and Snam will line up against RWE Gas and Wintershall Gas - and domestic analysts are predicting a fierce battle for the stake.

Russian giant Gazprom has also said it is interested. At the start of this year some experts had suggested that the government may face a political conundrum if the Russian firm were to make a strong bid for SPP. Almost all of the gas flowing through SPP's pipes comes from Russia, but with the government keen to look West as much as possible as it tries to join both NATO and the EU, some observers speculated that foreign policy might play a large part in business decision-making. That dilemma may not arise after all, said Kabát.

"Gazprom won't be interested in it. They don't have the money for it, and why would they want to buy it? They basically control most of what goes into the pipeline, so they don't need it."

Revenues from the sell-off, once it is completed, are expected to be a windfall for the state. The entire company has been valued at between $6 and $8 billion. The 49% stake should fetch at least $2 billion, possibly even more, and the money will be used to pay down state debt and to support reform of the pension system.

But while SPP privatisation may bring the firm a step closer to efficient performance a pan-European market, it carries with it an even bigger hurdle for this and the next government.

The Mikuláš Dzuirnda administration has admitted it will not be able to complete the sale of power monopoly Slovenské elektrárne (SE) - as important for liberalisation of the energy sector as SPP's privatisation - before the next elections.

SE, in debt and widely considered to have been more strongly tied to political lobby groups than SPP, must first be broken up into different parts before it is sold off.

The scale of the SE project, and the political obstacles it faces, are daunting. Investors and sector experts fear that the sale may be delayed indefinitely if a the next Slovak government follows the anti-energy sector privatisation policies of the former Mečiar regime.

"This government will prepare SE for privatisation, and I hope that the next government will be wise enough to privatise the company as soon as possible," said Tvaroška.