Determined to show its support for the NATO military alliance and its worthiness as an aspiring NATO member, Slovakia will send 100 soldiers to join a NATO mission in the Balkans beginning next year, the Slovak government decided August 15.
According to Slovak Defence Minister Jozef Stank, the decision was a significant one. "Above all, this [decision] shows that Slovakia feels a responsibility for helping restore stability in Europe. It also has important overtones for [Slovakia's potential NATO] integration," Stank said at a press conference August 15. 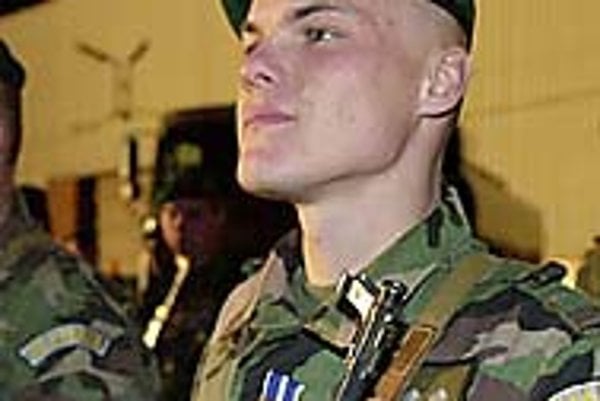 Font size:A-|A+  Comments disabled
Determined to show its support for the NATO military alliance and its worthiness as an aspiring NATO member, Slovakia will send 100 soldiers to join a NATO mission in the Balkans beginning next year, the Slovak government decided August 15.

According to Slovak Defence Minister Jozef Stank, the decision was a significant one. "Above all, this [decision] shows that Slovakia feels a responsibility for helping restore stability in Europe. It also has important overtones for [Slovakia's potential NATO] integration," Stank said at a press conference August 15.

The Slovak contingent will join 400 Czech soldiers to create a joint unit on the border between Serbia and Kosovo at the beginning of March 2002. The mission will cost Slovakia almost 250 million crowns ($5 million).

Stank noted that the Slovak military unit would thus become the largest contingent sent to NATO-organised mission from all of the nine states hoping to join NATO, and said he felt the move would help "Slovakia's eventual achievement of a full mandate in the North Atlantic Treaty Alliance."

Slovakia has said it hopes to join the North Atlantic alliance and the next round of expansion, which is expected to occur at NATO's Prague meet in fall 2002.

Douglas Hengel, US chargé d'affairs in Slovakia, said that such displays of activity and commitment to NATO goals were important for aspiring member states, and welcomed the decision of the Slovak government.

Slovakia has over 600 troops [see chart, this page] with United Nations and NATO-led operations.

In addition to the August 15 troop commitment, Slovak, Czech and Polish defence officials headed by Slovak Deputy Defence Minister Rastislav Káčer signed a deal August 17 on the creation of an international military unit to be put at the disposal of NATO. The three countries have yet to decide how many soldiers each will contribute to the unit.

Hengel said that all contacts the Slovak military had with NATO exercises were valuable. "The troops involved gain experience in operating with NATO-member countries, and they rotate every few months, meaning that they gain experience in working with other NATO countries.

"Military preparedness and interoperability with NATO are key components [of the defence programmes of NATO members and aspirants], because every country must be prepared to contribute to the Alliance's mission," Hengel added.

The latest military commitments from Slovakia come as senior NATO members intensify their evaluation of the country's worthiness to join the Alliance in 2002.

A US defence establishment team visited Slovakia between August 20 and 23 to prepare a report on Slovakia's readiness for NATO entry. Hengel said that the team was also trying to identify areas in which the US government could help Slovakia in its integration ambitions.

The report will be presented to the US Congress before the Prague summit which will then discuss its stance on NATO enlargement at the Prague Summit.

The last expansion round was in April 1999 when three of Slovakia's neighbours - the Czech Republic, Poland and Hungary - were invited to join. Slovakia was not included then because of misgivings over its commitment to democracy under the 1994 to 1998 Vladimír Mečiar government.

"They [the evaluation team] are here to help my government make decisions about which countries we will support for NATO membership at the Prague summit," said Hengel. He refused comment on the team's initial findings, noting that such evaluations took more time to complete.

However, recent political unrest in Slovakia, and reactions from western diplomats, has underlined the need for the country to again beware of possible political shortcomings.

The Hungarian Coalition Party (SMK), which represents Slovakia's 10% ethnic Hungarian population, was to decide whether or not to leave the government on August 25 because of differences over the content of a recent reform of regional government.

František Šebej, head of the parliamentary European Integration Committee, said August 21 that if the SMK left the ruling coalition, it would in effect "jeopardise [Slovakia's] chances of joining NATO."

Mária Kadlečíková, Deputy Prime Minister for European integration, said she was also concerned that "the withdrawal of the SMK could be seen abroad as a signal of political instability in the country".

The reason the decision of the SMK is so significant, explained Ivo Samson of the Bratislava-based Slovak Foreign Policy Association, was that the participation of the SMK in the cabinet since 1998 had been seen abroad as "a sign of the maturity of Slovak society as a whole".

The departure of the SMK, Samson continued, might thus be seen as an indictment of the cabinet's policy towards minorities, and could cause problems with Hungary - an unwelcome blight on any aspiring member country's profile.

"From my discussions with leading US security experts, I know that for them the issue of political stability, the fragility and political disunity of the current ruling coalition, remains the biggest problem for Slovakia," Samson added.

Hengel weighed into the debate in an August 16 interview with the Slovak daily paper Sme. "Slovaks deserve to live in a full democracy, to integrate into European and Euro-Atlantic structures, to enjoy a growing economy and respect minority rights. We believe that the best way to successfully continue in this process is that this government remains together.

"It will be crucial to my government that Slovakia and other aspiring countries share the common values of the Alliance. Clearly, the prior government [led by Vladimír Mečiar] in Slovakia by its policies did not show commitment to those values - democracy, and protection of minority and human rights," the US chargé d'affaires said.

Deputy Defence Minister Káčer admitted that political instability was not desirable for Slovakia or any country wanting to be a member of international groupings such as NATO, but insisted that "the danger to Slovakia's integration ambitions even if the SMK leaves [the coalition] shouldn't be overestimated."