Where in the world is Carl Spielvogel?

NEW YORK: Former US Ambassador to Slovakia Carl Spielvogel made a tour of Bratislava's Old Town with wife Barbaralee Diamonstein days after he took his post in early August 2000.
Clad in a red-chequered suit jacket in the summer heat Spielvogel stood next to Čumil, Bratislava's bronze man-in-the-manhole, looking more like somebody's eccentric uncle on an extended vacation than the succesful businessman he had been or the effective diplomat he was to become. 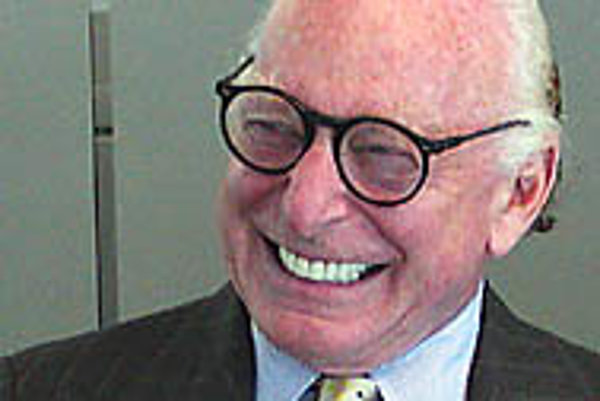 Font size:A-|A+0
NEW YORK: Former US Ambassador to Slovakia Carl Spielvogel made a tour of Bratislava's Old Town with wife Barbaralee Diamonstein days after he took his post in early August 2000.

Clad in a red-chequered suit jacket in the summer heat Spielvogel stood next to Čumil, Bratislava's bronze man-in-the-manhole, looking more like somebody's eccentric uncle on an extended vacation than the succesful businessman he had been or the effective diplomat he was to become.

Yet during his eight-month tenure, Spielvogel proved an energetic promoter of Slovakia, organising an investment tour of the US by Deputy Prime Minister for the Economy Ivan Mikloš, and bringing top American journalists and businessmen to meet Slovak leaders and lecture to students. After Republican George W. Bush won the White House in November 2000, Spielvogel was recalled on April 15, his ambassadorship over as it was just beginning.

Now Spielvogel is back in his office at the New York offices of the Financial Times in a skyscraper near central park in Manhattan, re-immersed in the business world he left behind to become ambassador. He pledges to keep doing what he can to help Slovakia, and remains upbeat about the American system of political appointments that gave him an ambassadorship only to take it away little more than half a year later.

"The system has a long tradition, one that President Bush is now continuing," said Spielvogel, sitting in a boardroom overlooking the Manhattan traffic. "It's not perfect, but it does bring people into the system who have something to offer."

Despite substantial contributions to the Clinton and Gore campaigns, Spielvogel maintains he was awarded the post on merit. "A lot of people who contributed a lot of money did not become ambassadors," he said. "You can't buy an ambassadorship."

What Spielvogel brought to the position was a global web of commerce and cultural contacts centred in his native New York. He sits on the boards of four corporations, has an advisory role at the Financial Times, owns his own consulting company, has done business in over 55 countries, and is a member of at least eight cultural and civic organisations, including the board of trustees at the Lincoln Center for Performing Arts in New York.

Since his return from Slovakia, he has resumed those positions and joined a study group on Slovakia at the Center for Strategic and International Studies (CSIS) in Washington. "I'm up early every day and in bed late," he said of his schedule, then added, quoting Noel Coward: "For me, work is more fun than fun."

The US is the only western country to appoint a significant portion of its foreign ambassadors (about one-third) from outside the ranks of its professional foreign service. These political appointees are usually supporters of the party in power, which is why all US ambassadors submit resignations after each presidential election.

Spielvogel was officially nominated to succeed Ralph Johnson, a career diplomat, on June 28, 1999. The White House told him not to quit working just yet because the senate, which confirms nominations, was unpredictable.

The warning proved prophetic as the Spielvogel nomination was held up for over a year by Senator Charles E. Grassley, an Iowa Republican, who was protesting an unrelated personnel matter at the State Department. Spielvogel was frustrated and Slovak politicians mystified by the delay.

"I met with the Senator and told him that I'm like the guy who walks into a convenience store during a hold-up and gets taken hostage," said Spielvogel. "He said, 'That's right, I need hostages.'"

Thirteen months later the hold was lifted, although the Senate failed to confirm Spielvogel before adjourning for the summer. Clinton then employed a rarely-used presidential power which allowed him to name Spielvogel ambassador during the legislative recess, and Spielvogel embarked for Bratislava with voices in the American press decrying the use of a loophole to land a Clinton supporter and diplomatic greenhorn in a country with serious political issues, namely EU and NATO integration.

Secretary of State Madeleine Albright told Spielvogel before he left that Ambassador Johnson had helped Slovakia build a civil society, and that now it was Spielvogel's mission to put Slovakia on the business map. With a November election looming and Bush leading in the polls, Spielvogel was aware that his days might be numbered.

He arranged several highly-publicised visits, including those by Paul Reiser of the Wall Street Journal, the managing editor of the Financial Times, bankers and a shopping centre developer. But Spielvogel is most proud of an American tour he took with Mikloš in February 2000.

"We went to New York, Pittsburgh, Cleveland and St. Louis, where Mikloš met with 400 investors. From the trip [Slovak investment agency] SARIO compiled a data base with over 800 potential investors," he said.

SARIO said that some of those forged relationships had already begun to pay dividends. Two US firms (one focused on the tourism sector), have made on-site visits to Slovakia and appear ready to invest.

"Carl Spielvogel took extraordinary steps in promoting Slovakia in the US," said SARIO spokesman Martin Horváth. "He helped prove the credibility of the Slovak Republic as an interesting investment location."

Spielvogel was also instrumental in the formation of the Council for a Better Slovakia, which aimed at promoting Slovakia first at home, then abroad as a desirable investment and tourism destination. Dan Jurkovič, the Creative Director at Mayer/McCann-Erickson in Bratislava, one of the advertising firms leading the promotional campaign, said the Council had been essentially put on hold since Spielvogel left town.

"His presence here was a motivating factor," he said. "He was the one who started the club, a club which was long overdue. The obstacles we now face would have been the same [namely, a lack of financing] even if he were here still, but maybe the people involved would have remained more inspired."

Spielvogel and wife Barbaralee will return to Slovakia in November for an exhibit she is organising at Palffy Palace of the work of Dale Chihuly, the world's premier glass artist and an American with Slovak roots. And on November 4, the Spielvogels will host Prime Minister Dzurinda, in town to run the New York marathon. Both events are part of Spielvogels' plan to stay connected to Slovakia.

"My wife is also putting together a second month of Slovak culture for September 2002 [the first was winter 2001]," said Spielvogel. "And I receive several calls a week from businessmen seeking advice about Slovakia," he added.

"The future looks good for Slovakia. I think the country will be in NATO by 2002, although EU entry looks more complex. Although I'm no longer ambassador, I'm going to keep doing everything I can to promote Slovakia's image in the US and help the country move forward [in its bid to join the West]."