One of Slovakia's most controversial banks, Devín banka, was put under forced administration August 24 after running into severe liquidity problems under the weight of mounting losses.
The bank, which has been at the centre of a number of scandals involving Russian debt recovery and links to opposition and coalition political parties, is likely to file for bankruptcy, central bank governor Marián Jusko said, unless an investor put 3 billion crowns in cash into the bank's basic capital by August 31.
"My personal guess is that it won't happen. The bank's losses are enormous," he said as Devín went under central bank administration. 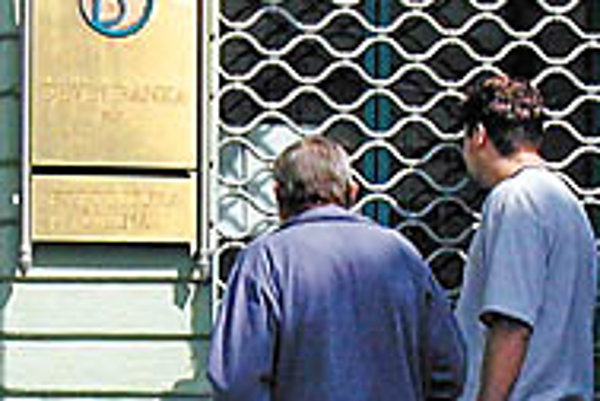 Font size:A-|A+  Comments disabled
One of Slovakia's most controversial banks, Devín banka, was put under forced administration August 24 after running into severe liquidity problems under the weight of mounting losses.

The bank, which has been at the centre of a number of scandals involving Russian debt recovery and links to opposition and coalition political parties, is likely to file for bankruptcy, central bank governor Marián Jusko said, unless an investor put 3 billion crowns in cash into the bank's basic capital by August 31.

"My personal guess is that it won't happen. The bank's losses are enormous," he said as Devín went under central bank administration.

In announcing its action the National Bank of Slovakia (NBS) revealed a litany of financial woe and mismanagement at Devín, and claimed Japan Grade One, a financial group which had been courting Devín banka, had, in collusion with Devín's managers, falsified documents on risk coverage and a promised capital injection.

The Slovak finance house's cumulative loss had reached 1.2 billion crowns ($24 million), its basic capital was 1 billion crowns, and three quarters of the loans Devín had given were now classified, or unrecoverable, the NBS said. The bank had been offering interest rates at twice the average market level for years.

Moreover, Jusko described as "suspicious" the fact that the Japanese group had only come into existence in April this year, had such a low basic capital, and an executive board which actually consisted of one person.

The government ruled out the possibility of taking over the bank or hauling it out of its financial quagmire with a capital entry.

"The government does not agree with any capital entry of the state or a state-controlled institution into the bank. The documents [on Japan Grade One's capital entry into Devín banka] which we have at our disposal are clear evidence of an attempt to fraudulently raise the basic capital of the bank," said Deputy Prime Minister for the Economy Ivan Mikloš after a special cabinet meeting August 27.

The immediate closure of the bank's branches following the forced administration left a number of clients concerned that their deposits would be either lost, or at best paid to them only months later. The central bank has said that the Deposit Protection Fund, which guarantees clients' savings in the case of bank collapses, will pay the deposits.

However, with 11.2 billion crowns ($224 million) of deposits that would have to be repaid, and the Deposit Fund already holding billions of crowns of obligations to the NBS after previous bank collapses, it is expected that the process of returning the money to all clients will take several months. The Fund said on August 27 that it was likely to have to ask the NBS for a loan in order to make some or all of the payments. NBS governor Jusko refused to offer any dates, even tentative, for reimbursing depositors.

Some sector experts said that covering the accounts would be an extra burden on an already heavily obliged Deposit Fund. "The fund already has obligations of billions of crowns to the central bank, so if you add the 11 billion to those, it's a very big total. The situation is very precarious," said Pavol Pop, an analyst at Poštová banka.

The cabinet is also left with another pressing problem following the bank's virtual collapse - recovering the 1.2 billion crowns ($25 million) remaining in Russia's Soviet-era debt to Slovakia.

In 1996 Devín banka was selected to mediate the settlement of Russian debt to Slovakia. It won the same role again in 1999, handed the mandate in what many critics said was a non-transparent tender.

Devín faltered in its attempts to recover the debt for the state, failing to do so in line with an originally agreed timetable. However, it won a reprieve last year when its mandate to clear the debt was extended. It also received a 2.5 billion crown loan from the government in June last year, conditioned on its recovering an equivalent sum from the Russian debt, to stave off what even then the state recognised as serious financial problems within the bank.

Devín's role as mediator in the debt settlement process will end with its bankruptcy. The Russian government has already made an offer to pay, in a single instalment, 22% of the outstanding debt, asking Slovakia to forego the remainder of the dues for the quick settlement. The Slovak government previously rejected that offer, but may now be forced to review it, said Pop.

"There are two possible ways forward with the debt settlement: the government will reconsider the Russian offer, or it will have to find another mediator for the debt," he said.

The central bank has laid the blame for the collapse of Devín banka at the feet of those running the finance house, as well as Japan Grade One. NBS spokesman Ján Onda told The Slovak Spectator said the fault in this case "lies certainly with the management of the bank and the potential investor".

But on August 27 the state news agency, TASR, reported that in a fax sent that day from the firm Apis, in which Devín banka has a 20% share, managers of the Slovak finance house had rejected the allegations of fraud against them.

The fax, signed only by "former managers of Devín banka", stated that the documents proving sources were made available for raising the bank's basic capital were genuine, and that the central bank had not produced any evidence to the contrary. The chairman of the board at Apis is Ľubomír Kanis, who was head of Devín banka until January this year.

However, with Devín added to the list of banks put under forced administration in the last four years (see sidebar this page), questions were again raised over the central bank's governance of the sector.

Sector analysts have previously criticised the NBS's supervision of banks as ineffective, and on many occasions berated the institution for not acting more quickly to prevent banks in financial trouble from collapsing completely. The central bank has said that a new bank act, expected to be passed in parliament this September, would give it powers to govern the sector more effectively.

"One of the major problems and faults in this case was banking sector supervision. I agree that there is some weak legislation in the sector, but even within the legislation that exists supervision could be tougher," said Poštová banka's Pop.