Health worker Soňa Holúbková and media baron Pavol Rusko at the moment have one thing in common; they both run charity foundations in Slovakia. This shared ground is being eroded, however, by backers of a draft law that would force foundation small-fry such as Holúbková to establish hefty endowment funds or give up their legal status.
Holúbková, after years spent working with the mentally and physically disabled in a state institution, launched the Krajina harmónie (Land of Harmony) foundation in the north-west Slovak city of Žilina in 1995. She said that she wanted to make her work with the disabled "more effective".
Pavol Rusko, part-owner of the thriving local TV station Markíza, started his Bratislava-based Markíza (Marquise) foundation as an offshoot activity two years ago in order, he explained, "to help the needy and spread the force of good." 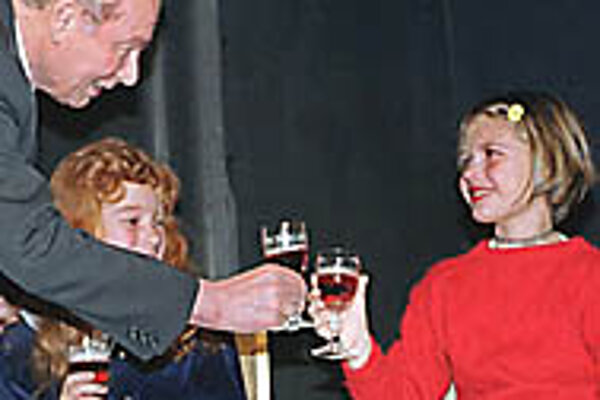 Font size:A-|A+  Comments disabled
Health worker Soňa Holúbková and media baron Pavol Rusko at the moment have one thing in common; they both run charity foundations in Slovakia. This shared ground is being eroded, however, by backers of a draft law that would force foundation small-fry such as Holúbková to establish hefty endowment funds or give up their legal status.

Holúbková, after years spent working with the mentally and physically disabled in a state institution, launched the Krajina harmónie (Land of Harmony) foundation in the north-west Slovak city of Žilina in 1995. She said that she wanted to make her work with the disabled "more effective".

Pavol Rusko, part-owner of the thriving local TV station Markíza, started his Bratislava-based Markíza (Marquise) foundation as an offshoot activity two years ago in order, he explained, "to help the needy and spread the force of good."

The Markíza and Krajina harmónie nadácie (foundations) are among some 500 such Slovak bodies, most of which are getting ready for a shake-up in the coming months. The main reason is that the state and some of Slovakia's bigger non-government organisations (NGOs) have backed legislation to bring domestic nadácie in line with the standard Western model: foundations built on endowments, and providing grants exclusively from the yields of endowment investments.

The draft amendment of the foundations law, which may go to parliament as early as the end of this year, would require all foundations to set aside at least 500,000 Slovak crowns ($10,000) as an endowment, compared to the current 100,000 crown ($2,000) stipulation.

The purpose of the latest foundations law amendment, say its sponsors, is to distinguish more clearly between grant-giving foundations and those which simply spend grants on their own activities.

At the moment, only a handful of Slovak foundations, many of them branches of foreign-based foundations (see table this page), actually provide grants - a situation the bigger players feel needs to be changed. "The primary goal of foundations is to provide grants," said Pavol Demeš, head of the central and eastern Europe office of the US-based German Marshall Fund and co-founder of several large foundations.

According to Demeš, those entities bearing the name 'foundation' yet providing no grants should re-register as civic associations or non-profit organisations, titles which would better fit their real status.

Civic associations and non-profit funds are legal entities that allow citizens to work together, yet require no or only a symbolic registered capital. However, they lack the appeal that foundations have for the public, their potential donors. As many as two thirds of Slovak foundations seek money for education- and healthcare-related causes.

Foundations must be transparent, given the financial advantages that their status confers, continued Bosák. At the moment, donations to foundations may be written off each donor's tax base. Also, foundation earnings up to 300,000 crowns are tax-free. Foundations themselves are lobbying for all their earnings to be tax-free, as is customary in European Union member countries.

On the other hand, over 90% of Slovak nadácie are small foundations with budgets of less than as million crowns ($20,000) a year. Most of them are therefore displeased by the draft amendment. "It's not fair to ask for this money [for the higher endowment requirement]," said Holúbková. "We had a hard time putting together the 100,000 crowns the law now requires. Besides, you can't really live on an endowment, even if you had a million crowns a year. At most you would make 10% per annum [in interest], which is only 100,000, to cover your activities."

Holúbková's Krajina Harmónie spent 600,000 crowns on operations in 2000, the main activity being a three-day arts and craft workshop for 500 handicapped children.

Alexander Fotul of the Košice-based Filia Centrum foundation argued that Slovakia is no America or Switzerland, and thus should not be introducing mandatory endowments. "I have no chance to come up with this kind of money, and will have to close down [if the amendment passes]," said Fotul, adding with visible emotion: "Why are they forcing us to be something we don't want to be?"

Filia Centrum foundation, which uses education programmes to deter young people from drugs, runs on an annual budget of around one million crowns.

Iveta Iršová of the Petržalské tigre foundation (Tigers for Petržalka, a Bratislava suburb), which sponsors 10 Siberian tigers that the Bratislava zoo cannot afford to keep, says she will need "to go begging around companies to put such a [500,000 crown endowment] sum together." Petržalské tigre lives on 350,000 crowns a year. Iršova said that re-registering as a civic association could lead to a decline of its appeal for the public, the crucial segment of donors. "The public responds better if one is called a nadácie than a civic organisation," she explained.

While small foundations are eager to tap local sources, many continue to depend on funding from abroad. Foreign sources such as the EU or US government have provided the bulk of money - some 2 billion crowns to date - that went into building Slovakia's NGO sector during the 1990s. Most of the funds flow through large foundations such as the Open Society Foundation of the US philanthropist, George Soros, or the EU-funded Civil Society Development Foundation; the larger bodies redistribute grants to small foundations or other NGOs doing fieldwork.

But after 10 years in Slovakia, with the country on the threshold of joining the European Union and Nato, several foreign donors have started to look further east and south to finance philanthropic work. Among others, the Ford Foundation, Pew Charitable Trust and USAID have already wrapped up their activities in Slovakia. "Foreign donors will not be here forever," said Zuzana Fraňová of Donors' Forum, an umbrella organisation for large Slovak foundations.

The volume of grants from the Open Society Foundation (OSF), which runs the most complex range of programmes in Slovakia (with education at its core, it supports programmes from environment to public health, from minorities to internet use promotion), peaked in 1999. Its funding for 2000 dropped by a third to levels last registered in 1995. On his recent visit to Slovakia, Soros said he intended to continue funding the country's NGOs through the Open Society Foundation at least until Slovakia joined the EU. Nevertheless, the Foundation has been shedding programmes and trawling for state or corporate funding to keep itself afloat, said Open Society spokesperson Stella Hanzelová.

As foreign funding wanes, domestic individual and corporate donors must be pulled into philanthropy if local foundations are to survive. Two large Slovak foundations have over the past several years shown the potential of local sources: Nadácia Deťom Slovenska (Foundation for Slovakia's Children) and Nadácia Markíza.

The Children's Foundation set out with foreign funding in partnership with the US-based International Youth Federation. In 1999, as part of a Europe-wide project, it launched the Hodina Deťom (Children's Hour) drive, targeting local philanthropic potential. Slovakia's Children campaigned for Slovaks to donate the last hour of their yearly wages to children' activities through the foundation. In the project's first year Nadácia Deťom raised 13.5 million crowns ($270,000) from individuals at some 2,500 businesses around Slovakia. Martin Renčo, the current head of the Children's Foundation, said the project proved that "even a small sum of money donated many times over can help substantially." Nadácia Deťom repeated the scheme last year, with similar success.

While foreign-based foundations point at Nadácia Deťom as a model to be emulated, it is far from clear that the Children's Foundation 'business model' can be copied by others. The Foundation ran a massive campaign in local media, including all the main TV stations and daily newspapers, which agreed to provide the advertising time for free. "We were one of the first foundations to run a campaign on such a [fundraising] strategy," said Renčo. "The cost of the advertising campaign alone was probably higher than the sum of contributions raised." Nadácia Deťom also has the largest endowment of any foundation in Slovakia - some 30 million crowns ($600,000).

The most expensive spots on the advertising market are on the hit station TV Markíza, where around 75% of Slovaks tune in every day; Nadácia Deťom was clever enough to bring TV Markíza's marketing director onto its board. Not every worthwhile foundation, however, gets free airtime on Markíza, especially since Markíza's Rusko set up a foundation of his own (see related story, page 8).

Nevertheless, the goodwill of domestic media may prove crucial to the survival of many Slovak foundations given the move by politicians to an endowment-based model, together with the trend among foreign funds towards gradual disengagement.

"Without foreign funds we would find existence very difficult," said Holúbková's Krajina Harmónie, which covers a third of its costs with grants from large foundations such as Open Society and the Civil Society Development Foundation.