Everywhere he has gone in the world, Tibetan spiritual leader the 14th Dalai Lama has been received by top political and religious leaders. But during his October 14-16 visit to Slovakia, he was snubbed by the country's top executive and legislative officials, who not only elected not to meet him, but also refused to explain why.
The Dalai Lama, winner of the Nobel peace prize and hailed as one of the central figures in the global campaign for human rights, has visited 47 countries. He has met several times with US President Bill Clinton, and also with French President Jacques Chirac and British Prime Minister Tony Blair. UN Secretary General Kofi Annan gave him an audience in 1998, as did Pope John Paul II. 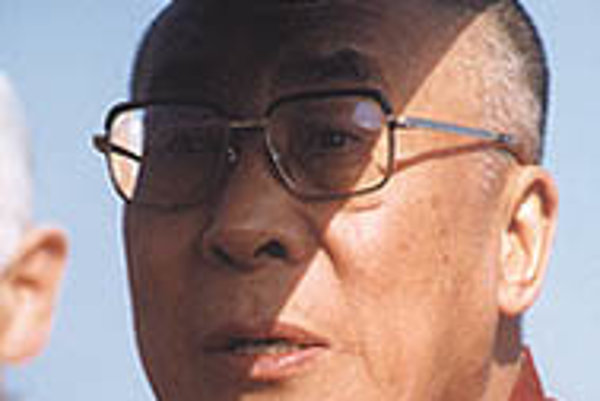 Font size:A-|A+  Comments disabled
Everywhere he has gone in the world, Tibetan spiritual leader the 14th Dalai Lama has been received by top political and religious leaders. But during his October 14-16 visit to Slovakia, he was snubbed by the country's top executive and legislative officials, who not only elected not to meet him, but also refused to explain why.

The Dalai Lama, winner of the Nobel peace prize and hailed as one of the central figures in the global campaign for human rights, has visited 47 countries. He has met several times with US President Bill Clinton, and also with French President Jacques Chirac and British Prime Minister Tony Blair. UN Secretary General Kofi Annan gave him an audience in 1998, as did Pope John Paul II.

The exiled Tibetan leader has also recently received the red carpet treatment on his central European tour, meeting Hungarian Prime Minister Viktor Orbán and being officially invited to the Czech Republic by President Václav Havel. His invitation to visit Slovakia, however, was as unofficial - extended by the At Home Gallery foundation - as was his reception. Prime Minister Mikuláš Dzurinda and Speaker of Parliament Jozef Migaš refused to meet him even casually, leaving it to lesser government and parliamentary figures to patch up the country's credit.

"I don't think such a meeting will occur," said Dzurinda when asked on October 12 what his plans for receiving the Dalai Lama were. Pressed to explain why, he said crossly: "I told you. I've already answered your question."

Migaš, for his part, said through his spokesperson that he would not be meeting the Tibetan guest, but did not volunteer a reason.

In the end, the Dalai Lama did not arrive to an empty house. Deputy Prime Minister for Human Rights and Minorities Pál Csáky and Deputy Prime Minister for Economy Ivan Mikloš met him unofficially, while thousands of Slovaks packed Pasienky Stadium in Bratislava to hear him speak on "Ethics for the New Millenium". Bratislava's Comenius University, the largest in the country, bestowed an honorary doctorate on the Dalai Lama.

But the Tibetan leader was barely out of the country before a storm broke around Dzurinda's ears. An open letter addressed to the PM and signed by 36 people representing 17 non-governmental organisations raked the Slovak leader over the coals:

"Your attitude not only angered us but it also made us uneasy," the signatories wrote. "At a time when Slovakia needs to show the face of tolerance and to identify clearly with a vision of civil democracy and freedom, you have declared to the world your profound indifference in someone who is the symbol of dignity, vigilance and steadfastness in the fight to preserve human values, justice and tolerance in the world... We have missed yet another chance to send good news of ourselves to the world."

While Dzurinda and Migaš kept mum on their reasons for not meeting the Dalai Lama, their critics spoke indirectly of Slovakia's interest in improving economic ties with China, which does not recognise the authority of the Dalai Lama or the existence of Tibet as an independent country. The Slovak government, they said, feared provoking the anger of Beijing.

Just as the open letter appealed for "the value of human life to be placed above political and economic interests," political critics took the same tone. Peter Weiss, an MP with Migaš' Party of the Democratic Left (SD1) and chairman of the parliamentary foreign affairs committee, said "I see their position as a political one. It probably arose from the fact that we have certain ties, and relations with China are very important for Slovakia."

Members of the Democratic Party (DS) faction within Dzurinda's own SDK party were among the most fervent supporters of the Dalai, and spoke derisively of the prime minister's apparent fear that meeting the human rights leader would endanger business with China.

Asked why DS politicians had outnumbered all other political visitors of the Dalai, parliamentary integration committee head František Šebej said "maybe the difference is in what you English speakers call 'balls'."

Given Slovakia's rapidly heating relations with China, however, there may be more to Dzurinda and Migaš's refusal to meet the Dalai Lama than political prudence.

A chain reaction of high-level Slovak visits to China began in October last year when Migaš paid a visit to Chinese parliamentary speaker Li Peng. It continued this year when Deputy Foreign Minister Jaroslav Chlebo travelled to Beijing in March, saying that it would be "a pity if political differences that are not of a fundamental character" spoiled relations. He was followed in April by Slovak Defence Minister Pavol Kanis, and then in May by Culture Minister Milan Koažko, who reported that Beijing University was about to open a Slovak language department and produce a Slovak-Chinese dictionary. He was accompanied by Slovakia's most famous folklore dance group, Lúenica. The visits were repaid when Chinese parliamentary speaker Li Peng travelled to Slovakia in June and was received by Dzurinda.

Trade interests have also warmed this year, with the Slovak private power engineering firm SES Tlmaee signing a contract with the Chinese government to participate in the reconstruction of the Chinese thermal power station at Shen-Tou. The contract is worth about 4.5 to 5 billion crowns ($90 to $100 million) for SES Tlmaee, roughly equal to its entire 1999 turnover.

Devín banka has long been accused of non-standard banking practices and criticised for its ties to Migaš's SD1 party. In July, after four Slovak banks of similar size had been allowed to go bankrupt, Devín was saved from financial disaster by a state guarantee issued by the government of Mikuláš Dzurinda.

SES Tlmaee director of business development Ján Kukueka told The Slovak Spectator on October 19 that he didn't believe the SES Tlmaee-Devín banka-Migaš connection had influenced the behaviour of the politicians, and said that Bobok himself had nothing to do with politics (see interview this page).

Economic analysts took a similar tone, with Martin Barto, head of strategy at state bank Slovenská sporite3oa saying that "even without the SES or Devín connection, Migaš would never have met the Dalai Lama. They have completely different views of the world."

"This is all about how we [Slovakia] behave to big powers," added Barto. "This [not meeting the Dalai Lama] was not the behaviour of a fully independent state, but one that still bows before large countries."