Just days before a scheduled visit to Slovakia by German Chancellor Gerhard Schroeder, a Berlin court agreed that it would hear the case of Slovak Jews suing Germany for World War II compensation. The unprecedented case was filed on behalf of Slovak Holocaust survivors who feel ignored by Germany's decision to negotiate directly with Jews from the Czech Republic, Poland, Belarus, Russia and Ukraine, but not Slovakia.
The Ústredný zväz židovských náboženských obcí (Central Union of Jewish Religious Communities in Slovakia) filed the suit against Germany on August 11, seeking return of the 200 million crowns originally paid to the Third Reich by the Slovak government in 1942 for the deportation of nearly 60,000 Slovak Jews to concentration camps. Earlier this month, a regional Berlin court set March 28, 2001 as the deadline for the case to begin. 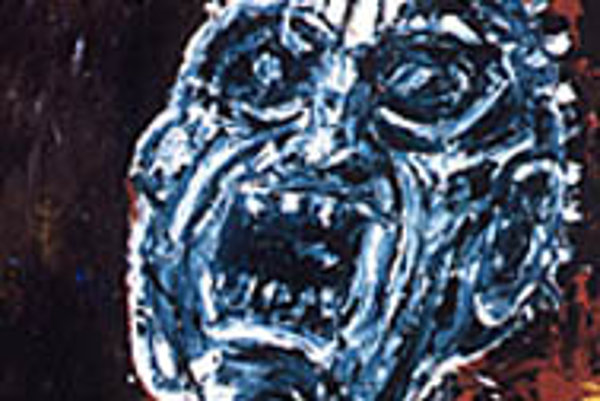 Font size:A-|A+  Comments disabled
Just days before a scheduled visit to Slovakia by German Chancellor Gerhard Schroeder, a Berlin court agreed that it would hear the case of Slovak Jews suing Germany for World War II compensation. The unprecedented case was filed on behalf of Slovak Holocaust survivors who feel ignored by Germany's decision to negotiate directly with Jews from the Czech Republic, Poland, Belarus, Russia and Ukraine, but not Slovakia.

The Ústredný zväz židovských náboženských obcí (Central Union of Jewish Religious Communities in Slovakia) filed the suit against Germany on August 11, seeking return of the 200 million crowns originally paid to the Third Reich by the Slovak government in 1942 for the deportation of nearly 60,000 Slovak Jews to concentration camps. Earlier this month, a regional Berlin court set March 28, 2001 as the deadline for the case to begin.

"Germany must not show responsibility toward other countries while shunning Slovakia," said Jewish Union head Jozef Weiss in an October 6 press release. After completing talks with other eastern bloc countries, he added, Germany then reneged on a promise to negotiate with Slovakia after talks with the Czech Republic had concluded.

Although the suit was filed just over two months ago, the fact that the German court even set a date for the trial was deemed as an important step. "It is a big victory in that they agreed to hear it," said attorney Chuck Vernon from Squire, Sanders and Dempsey in Bratislava. "It can be exceptionally hard to convince a state to allow itself to be sued. Now that that's been done, a legal process has to begin which could take years, although these types of high profile cases dealing with sensitive issues are sometimes expedited."

The recent publicity surrounding the case comes days before the planned October 23 visit by Schroeder. Leaders of Slovakia's Jewish community said they were hoping that Slovak officials would express support for their case during talks.

Slovak Foreign Affairs Ministry spokesman Boris Gandel said that although no one from the ministry had ruled out the possibility of the subject being discussed, the Slovak government would not attempt to interfere with a case in the German legal system. He added that he hoped the two sides would reach a settlement out of court.

Slovak media have recently speculated that Germany's refusal to negotiate directly with Slovakia may be based on the fact that Slovakia's wartime state was technically independent. Most historians, however, consider the wartime Slovak government, led by Catholic priest Jozef Tiso, to have been a puppet administration propped up by Nazi Germany.

Regardless, Jewish leaders argued that the money paid by Slovakia to Germany in 1942 to cover 'expenses' incured in transporting Jews to death camps had not in fact corresponded to any real outlay on Germany's side, and that the remaining Jewish community in Slovakia now had a "moral right" to get back the money.

When contacted by The Slovak Spectator, the German Embassy in Bratislava said they were unable to comment on the case at this time.

Always an intricate mix of law, politics and morality, the issue of Holocaust restitution has taken a bizzare twist in Slovakia's case as it was the only country which actually paid Germany for the deportation of its own Jewish citizens.

"They [the Slovak Government] paid 500 German marks per person, about 5,000 crowns at the time," explained historian Ivan Kamenec in a recent interview with the Slovak weekly Domino fórum. Historians estimate that 1,000 to 1,500 crowns would have been enough to support an average family for one month during wartime Slovakia.

In total, 58,200 of the nation's Jews were deported under the 1942 agreement between Slovakia and the Third Reich, with all but 300 perishing in concentration camps, according to the Jewish Union. Rather than being paid directly in cash, the 200 million crown sum was subtracted from the German side of a pre-existing account between the two countries.

Adding insult to injury, the Jewish Union's executive chairman Fero Alexander said, Germany later haggled over the sum which had been agreed. "After they [the deported Slovak Jews] died, Germany started claiming that the sum hadn't been sufficient for the settlement and retraining of the deportees," he said.

Germany claimed that the money was needed to cover transportation and housing for the deported Jews, including the costs of what the Nazis said were new living quarters for the prisoners in Poland. Modern historians like Kamenec, however, doubt whether the Slovak government actually believed this explanation, especially after children and the elderly joined those being sent to what were allegedly labour camps in April 1942.

Stranded behind the Iron Curtain

Since the end of WWII, Germany has paid $70 billion in reparations to Israel and survivors of the Holocaust. Several landmark cases in the 1990s involving Nazi gold (a settlement by Swiss banks alone was worth $1.5 billion), seized property and slave and forced labour saw billions more paid in restitution to survivors. Claims on unpaid insurance policies were also settled.

But not until 1998 did Jewish victims in central and eastern Europe - an estimated 20,000 to 60,000 of the world's 600,000 holocaust survivors - become eligible for pensions similar to those which had been received by their counterparts in the West since the 1950s. That year, a fund was established providing 500 German marks per month to Jews that had spent at least six months in concentration camps or 18 months in ghettos.

Konrad Matschky, spokesperson for the Claims Conference in Frankfurt, the US-based Jewish organisation that manages the fund, said that of the some 18,000 Jews currently receiving pensions in eastern and central European countries, roughly 900 are Slovak, with 400 cases involving Slovaks still pending.

But questions over the past still linger. After several years of pressure and lawsuits from the United States, last August the German government, in tandem with German industry, created the $5.2 billion 'Memory, Responsibility, Future' fund to deal with claims involving slave and forced labour.

Both the German government and industry representatives had hoped that the establishment of the fund would bring an end to holocaust-related lawsuits, especially in the United States, which as a condition of the agreement promised to discourage future legal action in its courts.

But in establishing the fund, Germany failed to directly negotiate with Slovakia, a move that angered local Jewish representatives.

In order to seek indemnity for slave labour and other unresolved issues, Slovak Jews have to apply through the Claims Conference, known for its cumbersome bureaucracy. Jews in Russia, Belarus, the Ukraine, Poland and the Czech Republic recieved compensation that they can divide internally.

"The advantage [for the Czechs] is that the distribution takes place within Czech structures," said Alexander of the 140 million mark Czech fund. "For example, they can make criteria [for receiving restitution] softer. This is what we wanted too, but we were not successful."

Another attempt earlier this year to engage Germany in discussions over the deportation fees ended with Slovak Jews being directed by German Chancellor Schroeder to the 'Memory, Responsibility, Future' fund. Disappointed again, the Jewish Union decided to take their claim directly to the German court system.

Although frustration in dealing with the German government spurred them forward, Alexander, who is the son of two concentration camp survivors, said that his organisation had been gathering documents and considering legal action for many years.

"Not being a partner with Germany was only a part of it [our motivation for the lawsuit]. Foundations are a separate issue from this case. This case [of a country paying for the deportation of its own citizens] is the only one of its kind. It did not happen anywhere else," he said.

A long history of persecution

Jews first began arriving in Slovakia in the 10th century. Regularly subjected to persecution and expulsions, they weren't allowed to own real estate until 1860. By the beginning of WWII, however, a thriving Jewish community of 90,000 lived within the Slovak borders of the time, that number rising to 130,000 if the expanded borders of present-day Slovakia are used for calculation.

Rising anti-Semitism at home and influences from abroad culminated in 1941 when Slovakia's WWII fascist state enacted the Jewish Code, an anti-Jewish body of law considered among the cruellest in European history. Ideologically based on the Nuremburg Laws of Nazi Germany, Jews were forbidden to participate in sporting and cultural events, permitted to shop only during specified hours of the day, and had their property seized by the government. A clause in the legislation requiring Jews to work later provided the legal basis for the deportations of some 70,000 between 1942 and 1944.

Decimated by the Holocaust, the Jewish community then saw its once vibrant ghetto on the south hill of the Bratislava Castle begin to slide into ruin from neglect. In the 1960's, the ghetto and its Jewish Synagogue were demolished to make room for the construction of the Nový most (New Bridge) connecting the city centre with the Bratislava suburb of Petržalka. Feeling harassed by the communists, many Slovak Jews left soon thereafter when Warsaw Pact troops invaded in 1968.

Today only about 3,000 Jews remain in Slovakia; roughly half of them are ageing Holocaust survivors. Leaders in the Jewish community say they have focused on securing reasonable lives for the ageing Jewish victims, a cause that could receive an enormous boost with a victory in the German courts.

"Survivors of the Holocaust know better than anyone that money can do nothing to ameliorate the suffering, injustice and humiliation of the past," said Baruch Myers, Slovakia's only rabbi. "Even so, countries should do the maximum to provide for the survivors. The Slovak Jewish community especially has pressing financial needs. Aside from being used for a Jewish retirement home, money could go toward things such as repairing our synagogue and certain historical sites."

The Jewish Union has left it up to the German courts to decide the extent of compensation - how much the 200 million Slovak crown sum paid in 1942 should be worth in today's currency. Alexander says that if the issue of the deportation fees is decided in their favour, his organisation would probably not initiate further legal action against Germany.