Ján Earnogurský, one of Slovakia's most storied politicians, gave up his decade-long chairmanship of the ruling coalition Christian Democrats last weekend. The man who replaced him, deputy speaker of parliament Pavol Hrušovský, promised to return the party "to the ring" and its policies to their conservative, Christian roots.
"You aren't beaten if you get knocked to the mat," Hrušovský told the 430 Christian Democrat delegates at the party's October 21 conference, shortly after beating rival candidate Ján Fige3 by 249 votes to 179. "You're beaten if you stay down. I don't want the Christian Democrats to stay down. Today we have to stop looking at each other like losers. Today we have to start looking at each other like winners." 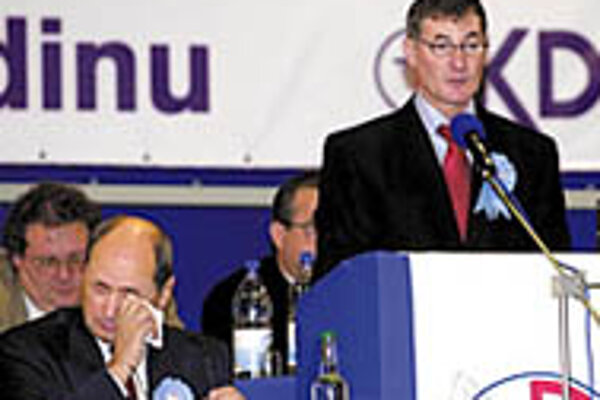 Font size:A-|A+  Comments disabled
Ján Earnogurský, one of Slovakia's most storied politicians, gave up his decade-long chairmanship of the ruling coalition Christian Democrats last weekend. The man who replaced him, deputy speaker of parliament Pavol Hrušovský, promised to return the party "to the ring" and its policies to their conservative, Christian roots.

"You aren't beaten if you get knocked to the mat," Hrušovský told the 430 Christian Democrat delegates at the party's October 21 conference, shortly after beating rival candidate Ján Fige3 by 249 votes to 179. "You're beaten if you stay down. I don't want the Christian Democrats to stay down. Today we have to stop looking at each other like losers. Today we have to start looking at each other like winners."

In many ways, Hrušovský's election was less significant for the future of the party than Earnogurský's decision not to run. A former dissident jailed by the communists in 1988, Earnogurský had for 10 years lent the Christian Democrats his moral credit and had been a steadfast opponent of authoritarian former Prime Minister Vladimír Meeiar. But in the aftermath of the 1998 elections, Earnogurský's knack for getting embroiled in damaging fights with his political allies, as much as his fondness for making provocative public statements, made it clear that he was becoming more a liability than an asset to the party.

Hrušovský, the departing chairman said, now had the job of returning the Christian Democrats to the popularity they enjoyed in previous years "with his élan and new ideas, which I after 10 years was no longer able to give."

By many accounts, Hrušovský is the man for the job. Grigorij Mesežnikov, President of the Bratislava thinktank Institute for Public Affairs (IVO) said that "one has to realise that during the Meeiar government, the Christian Democrats were the strongest opposition party, and were the only real force opposing the HZDS [Meeiar's party]. Hrušovský has the strength and the skill to make them strong once again."

After reaching a high of 17.1% popularity in October 1997, according to the MVK polling agency, the Christian Democrats were subsumed within the five-party Slovak Democratic Coalition to fight September 1998 elections. Once in government, not only did the party suffer a number of high-profile cabinet defections (former Telecom Minister Gabriel Palacka, Interior Minister Ladislav Pittner), who left to join forces with former Christian Democrat Prime Minister Mikuláš Dzurinda, but last year also fell well below the 5% voter support needed to secure representation in parliament.

But the political programme advanced by Hrušovský in pursuit of greater support may not be radically different from the traditional Christian stances favoured by Earnogurský.

A series of billboards with the logo "Áno pre rodinu" ('Yes for the Family') and sponsored by the Christian Democrats have gone up around the country in recent days. They feature pictures of smiling, white-skinned and apparently prosperous people of all ages grouped as if for a family portrait. According to the party's vice-chairman for media, Vladimír Palko, the campaign has been in the works since the summer.

The same accent on family, as much as a concerted campaign against 'family-destroying' forces, has been evident in the party's pronouncements for the same period. This past August, Earnogurský himself came out harshly against homosexuals and the institution of 'registered partnership' that would give gay couples some of the rights currently enjoyed by married couples. "While I am Justice Minister there will be no registered partnership," declared Earnogurský, before advising that homosexuals seek medical treatment. Party officials at the same time promised action against pornography and prostitution.

In the same spirit, the recent Christian Democrat conference approved a motion to launch a public discussion on banning abortions except in special cases. While the motion was not couched in the same firebrand terms as Earnogurský's anti-homosexual statements, Hrušovský himself said that the party's conservative values needed a shot in the arm. "Faith in the Christian Democrats means faith in the principles of Christian politics," he said. "I get the feeling these principles have slowly been weakened, and people [party delegates] have become accustomed to the idea that you have to sacrifice values for the sake of raising [voter] support."

"This approach is not a genuine one," Mesežnikov countered. "Hrušovský has to give the party back its image as a strong, right-wing, conservative party. I think [with the 'family' programme] he'll be successful in getting back over 5% [support], but I don't think it has a future as a long-term strategy."

Hrušovský is also unlikely to abandon Earnogurský's pledge that the Christian Democrats would not merge with Dzurinda's new SDKÚ party, but would instead contest 2002 elections under their own banner. Even Fige3, who had been considered far closer to Dzurinda and the PM's grand 'centre-right' programme of political fusion, told delegates that "I not only reject the idea of fusion with other political parties, but I also consider questions of [possible election] coalitions to be premature."

Hrušovský had this to say about those Christian Democrats who had jumped ship to Dzurinda's party after 1998 elections: "Many [of our] members deliberately hurt and weakened the Christian Democrats. They used it [the party] to gain personal power and advantages."

But what may change for the Christian Democrats, now that Earnogurský is just a rank-and-file member, is the party leadership's penchant for controversy. The former chairman, as he has himself admitted, alienated some voters and political partners with his efforts to defend his party's interests at all costs - even voting in parliament against his own government's programme in 1998. Earnogurský has also become involved in the public discussion over settlement of the Russian debt to Slovakia and over the future privatisation of the energy sector, attracting attention to the fact that his brother Ivan had taken a loan from Devín banka, the bank charged with debt settlement, and had met several times with Devín banka chairman 1ubomír Kanis on behalf of the Christian Democrats.

He has also been known for his apparently pro-Russian statements: in 1997, he told media that Slovakia should be more "reserved" in its attitude towards NATO, while in a December 15, 1998 interview with the TASR state news agency, admitted himself to be a Russophile and said that "the mistake of Vladimír Meeiar's otherwise correct policy towards Russia was that he didn't at the same time cultivate as good or even better relations with the West."

"I admit we could change our style a bit to increase our support," said Hrušovský. "Hrušovský is more peace-loving than Earnogurský," agreed Mesežnikov.

So what's to become of one of the most charismatic political leaders the country has known? Far from piping down during his self-imposed exile to the back-benches, the former Christian Democrats boss insists "free speech" will continue to be "the air I breathe."

"Maybe you'll have something to write about," he quipped.