HOLÍČ - Milan Daniel, 18, sits quietly on the couch in his family's living room, his head propped on his right hand. His eyes are bloodshot, but wide in anticipation of his visitor's first reaction.
The first sight of him is frankly shocking. The left side of his skull is virtually flat, as if a chunk of his head has been cut out. He wears no bandages, and the angry looking stitches that bristle from his shaven scalp seem to highlight the gravity of his wounds.
Although Milan says he feels fine, his mother whispers that her son barely sleeps at night, even though he has been prescribed strong tranquillisers.
Milan Daniel suffered serious head injuries August 10 after he was beaten with a baseball bat by three Holíč men on the street just across from his house. 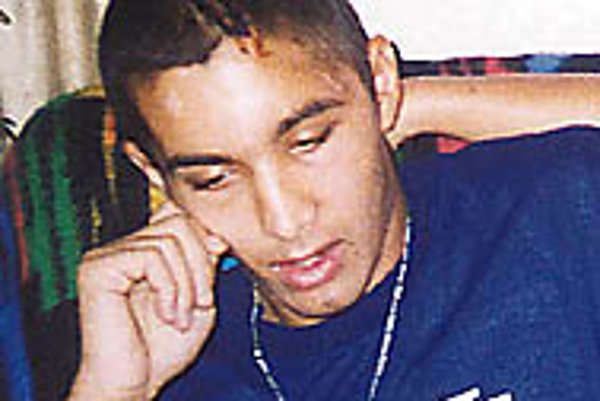 Font size:A-|A+0
HOLÍČ - Milan Daniel, 18, sits quietly on the couch in his family's living room, his head propped on his right hand. His eyes are bloodshot, but wide in anticipation of his visitor's first reaction.

The first sight of him is frankly shocking. The left side of his skull is virtually flat, as if a chunk of his head has been cut out. He wears no bandages, and the angry looking stitches that bristle from his shaven scalp seem to highlight the gravity of his wounds.

Although Milan says he feels fine, his mother whispers that her son barely sleeps at night, even though he has been prescribed strong tranquillisers.

Milan Daniel suffered serious head injuries August 10 after he was beaten with a baseball bat by three Holíč men on the street just across from his house. He collapsed on his doorstep and was later taken to Bratislava's Kramáre hospital in critical condition for an operation to relieve the bleeding into his brain.

"I don't remember anything," Milan begins when asked about the attack. He bows his head and points to the body wounds he sustained from being kicked. "The people who did this are totally... stupid," he says.

"They're well-known Holíč trouble makers, skinheads," interjects his mother, Terézia Danielová, breaking into tears as she explains that her son will have to undergo another brain operation next year in February.

"I pray to God that everything turns out fine," she says. "We are Roma, but does any human being deserve to suffer that much because his skin colour is different?"

Holíč, a town of 12,000, includes a 650 strong community of Roma (Gypsies), and has been in the national news since the Daniel attack.

While residents say the atmosphere in the town was tense in the days just after the attack, "it's better now," notes Ján S, 17, a non-Roma resident of the village. "During the first few days after the attack, we didn't know what was going to happen."

Shortly after Milan was attacked, local Roma men formed night patrols to guard their families and blocks of flats from what they predicted would be further attacks. One or two cars still continue patrolling, says Jolana Danielová, head of the Holíč Roma Civil Organisation for Peace and Human Rights.

"We don't think the police can protect us properly, so we are trying to help ourselves."

Milan Daniel's family, however, says they are still "terrified of what will come next".

"I'm scared to let my children go outside. They all have to be back home before sundown," Milan's mother says.

The fears of local Roma deepened recently when a district judge in Skalica decided to release Marian J., the youngest of Milan's three suspected attackers, from police custody. He remains under investigation. Marian J.'s suspected accomplices, Marián E. and Marko N., remain in custody, having been charged August 20 with a racially motivated attack.

"I'm terribly sorry for the boy," said Holíč Mayor Milan Kanda. "I understand the Roma are worried, but neither the Daniels family, nor other Roma, should fear repeated violence. I'm convinced that police can keep the town safe."

Ladislav Flamík, head of the Holíč police, told the Slovak daily paper Národná Obroda that he had ordered an extra 22 police on patrol since the beating.

In addition to the mayor's and Flamík's assurances that Holíč is now safe, the Slovak Interior Ministry has presented a plan to train policemen in dealing with minorities, especially Roma. The ministry took the step following complaints that the police had double standards for dealing with the Roma and non-Roma population in other situations similar to the Holie beating.

"There were cases where police followed a 'special' method of investigating Roma. Especially in small villages there have been cases where, if a Roma is the victim, an investigation doesn't even begin," she said.

The ministry plan was rushed forward following the death in police custody of Roma Karol Sendrei, 51, on July 6. Sendrei, a resident of the eastern Slovak town of Magnezitovce, was pronounced dead after having spent nearly 12 hours chained with his two sons to an iron bar at the nearby Revúca police station.

The Interior Minister, Ivan Šimko, this week expressed concern at the slow pace of the police investigation into the death. "We are giving this case extra attention not because it involved a Roma, but because this person died after police used force," the minister said September 2.

But despite the Interior Ministry's plans for police training and Šimko's personal intervention in the Senrdei investigation, Roma say they still face persecution.

Further south east of Magnezitovce lies Rožňava, a town of 20,000 inhabitants. On August 24, leaflets and posters appeared around the town addressed to "Gypsies, Jews, Vietnamese, Albanians and other garbage", stating that "work towards your elimination has progressed, and this is your last chance to leave our country." The leaflets also promised that violence would follow should the 'warning' not prompt an exodus of minorities from Slovakia.

Six young men, aged between 17 and 22, were later charged with spreading racial hatred in connection with the leaflets. The investigation is expected to be wrapped up within two months, and, if convicted, the six face between one and two years in prison.

But a recent separate ruling by the Žilina regional court in the death of Anastázia Balážová has brought outrage from human rights groups.

On August 20, 2000, a violent attack on the Baláž family in their own home left Balážová, a Roma mother of eight, dead as a result of head injuries.

With one of four men responsible for the attack, Peter Bandúr, already serving a seven-year sentence for Balážová's murder, the Žilina court ruled August 30 that Pavel H. and Pavol K. would serve five years each in prison for assault causing bodily harm and trespassing, while Marián S. was given three years on the same charges. Unlike in Bandúr's case, no racial motive for the attack was proven against the three. Had the motive been established, the men's sentences would automatically have increased by one third.

"It's absolutely ridiculous," said Columbus Igboanusi, head of the Bratislava-based Human Rights League. "During the investigation the suspects specifically mentioned that they were 'going to attack a Roma'. I'm disappointed. The whole trial was like rehearsed theatre."

The Justice Ministry's head of office, Daniel Lipšic, refused to comment on the Balážová case. He said, however, that he did not know "of any facts which would lead me to believe that they [investigators and courts] should be reluctant to prove racial motives".

Back in Holíč, the Daniels are impatient to see their son's attackers punished, and say they hope the court will "deliver justice for us". They do not attempt to conceal their anger towards the attackers.

They have also dismissed the possibility of emigration to avoid further attacks - a route many Roma, successfully and unsuccessfully, have previously tried in an attempt to escape what they claim is systematic persecution and discrimination in Slovakia.

"We were born here and we have a right to live here just like everybody else," says Milan's mother. "This is our country, just as it is yours."