The shadows are lengthening outside on a Sunday evening, but within the headquarters of Slovakia's newest television station, TA3, work continues apace. Although the station does not start broadcasting for several weeks, reporters are preparing for Monday's mock assignments, while a small knot of technical staff watches through the studio window as the news anchor reads her lines from the teleprompter.
The work of TA3's journalists will be seen by the public through cable for the first time on September 23. Editor in chief Zdenik Šámal, an old TV hand from the Czech Republic, knows how important the public's first impression of the station will be, and has been putting his team through its paces for over a month to work out technical bugs and professional lapses. 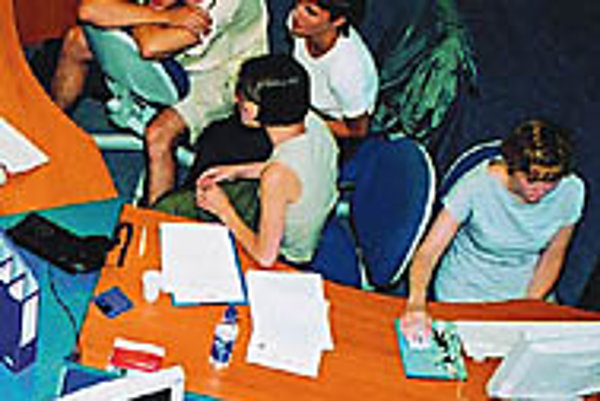 Font size:A-|A+0
The shadows are lengthening outside on a Sunday evening, but within the headquarters of Slovakia's newest television station, TA3, work continues apace. Although the station does not start broadcasting for several weeks, reporters are preparing for Monday's mock assignments, while a small knot of technical staff watches through the studio window as the news anchor reads her lines from the teleprompter.

The work of TA3's journalists will be seen by the public through cable for the first time on September 23. Editor in chief Zdenik Šámal, an old TV hand from the Czech Republic, knows how important the public's first impression of the station will be, and has been putting his team through its paces for over a month to work out technical bugs and professional lapses.

"Today we're in a pretty good situation," he said from his office overlooking the newsroom September 3. "We've been broadcasting [internally] for five days without major problems, eight hours of news on end each day. That's never been done in central Europe. I know we have to come up with twice as much news when we go on the air, but so far so good."

Despite Šámal's optimism, TA3's path to its first public broadcast has been roughened by financial shortfalls and questions over the intentions of its principal investor, the British firm Millennium Electronics Ltd.

The TA3 project, headed by executive director Martin Lengyel, co-owner of the CEN company which owns the station, was first given a broadcast licence by the Broadcast and Retransmission Council in September 2000. The project called for an investment of 350 million Slovak crowns ($7 million) at the time, but after negotiations fell through between CEN and Slovak firm Hanco, Lengyel contemplated giving up the idea of an all-news channel altogether.

"I thought for a while after we [CEN and Hanco] parted about giving up the licence," said Lengyel at TA3 September 4, "because we were being pushed by potential partners towards forming a broad commercial television station, and my ambition was never to be a Markíza No 2."

The privately owned Markíza, Slovakia's most popular television station, offers a slate of movies, soap operas, news, talk and game shows in comparison to TA3's planned 17 hours of straight daily news. TA3 is styled after news channels such as the American CNN and the UK's BBC World.

However, after meeting Simon Denton of Millennium Electronics Ltd "by chance" in London earlier this year, Lengyel managed eventually to convince Denton to invest approximately $3 million into the TA3 project in 2001, and to cover next year's projected loss of 15 million crowns ($30,000).

"Our project attracted Millennium because we were able to convince them that it could be interesting for a financial investor to exit from the project in two or three years if everything went according to plan," recalled Lengyel. "Three million dollars is not a huge investment, and if you look forward to 2004 when Slovakia may be a member of Nato and the European Union, then a news station for sale with an investment of $3 million and coverage of the Czech and Slovak markets may be very interesting for the investor to exit and sell the stake."

The investor flip-flop aroused some concerns with the broadcast council, which requested CEN in August to supply more details on Millennium. However, Ernest Valko, a well known Bratislava lawyer and a member of the broadcast council, explained that queries over Millennium did not threaten TA3's licence, and that how CEN arranged its financing was largely Lengyel's business.

"This has nothing to do with the start of broadcasting," said Valko. "They have permission to broadcast and everything is in order, they just wanted to sell a [55%] share [in CEN to Millennium]. For that they need the agreement of the council within two years [of issuance of the broadcast licence]. Whether or not they have finances, and under what conditions, that's their problem.

"The only concerns we have with Millennium is that the investment be transparent, and when Mr. Lengyel came here the first time and we had the feeling this was an offshore firm [some of Millennium's institutional owners are offshore firms - ed. note], we simply wanted a few more details about its successes and investments and so on."

Among the questions surrounding Millennium are the identity of its owners, the source of their capital, the nature of their other business dealings, and why the firm did no business last year.

Lengyel noted he had already provided the council with the documents required by law, and that he was weighing whether or not to accede to the request for more details. But even were the council to reject Millennium, he added, CEN's contract with its investor left room for other arrangements. Either way, he said, the money had already been put into TA3.

"I would say these concerns [about Millennium] lie more with elements of the press rather than the general population," he said. "I think most people just want high quality news."

While Lengyel's licence is secure, the change from Hanco to Millennium - and from a projected 350 million crowns in backing to 150 million - has required some trimming of TA3's operations.

"It [the reduced investment] hasn't changed our programme structure, we've just made some changes which were logical," said Lengyel. "A year ago we wanted to buy a building for 80 million crowns [$1.8 million], but decided to lease it for much better conditions. We had 200 people on our [projected employment] lists, but now know that it's possible to do it with half that many. We managed to purchase some technology for less money - we're based on computer technology, and such items get cheaper every year. A year ago it was a bigger television, now it's a smaller and more efficient one. When you cut 100 people you save a lot of money."

TA3 is now counting on its 100 staff to turn out 17 hours of news a day, on a start-up budget of 150 million crowns compared to what Lengyel estimated as 450 million crowns for the 1999 launch of private station TV Luna and 1 billion in capital investments for Markíza.

Markíza boss Pavol Rusko could not be reached for comment, but told The Slovak Spectator in March that he felt the "TA3 project is a dubious one, and I don't trust it. Why would anyone put tens of millions of crowns into TA3 when they cannot make their money back?"

The station uses new camera technology which records on hard disk rather than on tapes, improving the quality of images and allowing all editing of interviews to be done on computer. Compared with the state run Slovak Television (STV), TA3 crews require one camera operator rather than three. TA3 has also eliminated administrative staff such as human resources or financial services, outsourcing what its managers and their assistants cannot do themselves.

Whenever TA3 employees voice fears that there are simply not enough journalists to produce so much news, Šámal said, "I always respond that life is the art of the possible. We have what we have, and that's what we'll use to broadcast what we intend."

The station's advertising revenues have also been conservatively estimated, with Lengyel predicting 80 million crowns next year against costs of 95 million. He said he expected companies offering financial services, mobile and internet communication and cars to be among his biggest clients.

"I'm quite satisfied with our advertising revenue so far this year," Lengyel said. "Of course, they need to see our broadcasts, and once they do they will see that we're competitive; our news is already far better than Markíza's and Slovak Television's. The market will see very soon."

Jana Drobová, head of marketing at internet provider Nextra, said TA3's ad agency had already presented the station to her, and confirmed that her firm was "in theory" interested in advertising.

"There's nothing similar on the market, and their target group is the same as ours - decision makers," she said. "However, everything depends on the quality of the product they offer the viewing public."

TA3's exclusive advertising buyer is the Slovak Adman firm, a 100% daughter of Arbo Media of Munich. Adman is represented in Slovakia by Petr Volný, who also represents Arbomedia.net Slovakia, the monopoly ad buyer for STV. Lengyel says he offered STV the chance to have both stations sold as an ad package to offset Markíza's advertising power, but was turned down. "We offered them a chance to make more in advertising, because it's better to sell two TV stations as a package than one. It would be especially advantageous on this market where Markíza is so strong," said Lengyel.

STV spokeswoman Milena Rážová told The Slovak Spectator that STV "can in no instance agree to a step that could cast doubt on STV's objectivity and independence and at the same time not help to increase STV's revenues." She explained her station had not been convinced by Volný's presentation, and had feared coming under possible political influence.

TA3's broadcast transmission contract is with the Norwegian telecoms firm Telenor, and permits TA3 to get news feeds from any European country and even broadcast its own news throughout Europe on satellite - as long as the Slovak broadcast council agrees.

While English-language programming is not yet in the works, Lengyel says TA3 could answer requests for English reports on Slovak events from foreign channels if the need arose.

"We could do it for them in English, I imagine, but we aren't planning any regular English news for now. But I don't know - maybe one day we'll be broadcasting in Hungarian, or even Romany, depending on the penetration of cable and satellites among the Roma population."

Note: Lucia Nicholsonová, a former Slovak Spectator reporter and wife of editor Tom Nicholson, is now a reporter for TA3.