Šámal: TA3 coming to life "through blood and pain"

Zdenik Šámal, the editor in chief of the new TA3 television station, came to Slovakia with years of experience at the Czech weekly magazine Týden and the state channel Czech Television. The Slovak Spectator spoke to him about TA3 on September 3.
The Slovak Spectator (TSS): What did you know of Slovakia before taking the job at TA3?
Zdenik Šámal (ZŠ): I knew what people said about life under the former government, that the journalistic community was divided into two camps - activists and collaborators with the [Vladimír Meeiar] regime on the one hand, and fighters for democracy on the other. I knew that some journalists still carried these identities with them today, and that rather than fighting for something they have instead become sort of professional fundamentalists. 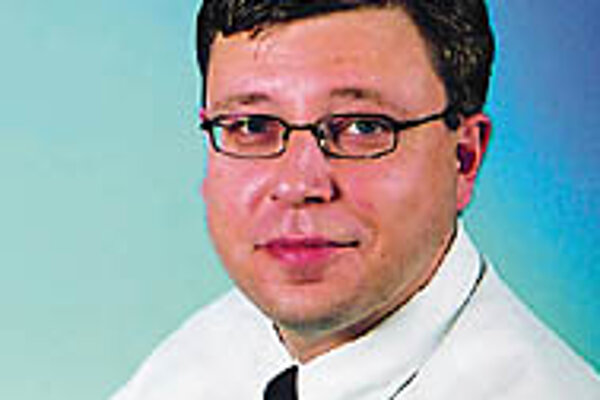 Font size:A-|A+  Comments disabled
Zdenik Šámal, the editor in chief of the new TA3 television station, came to Slovakia with years of experience at the Czech weekly magazine Týden and the state channel Czech Television. The Slovak Spectator spoke to him about TA3 on September 3.

The Slovak Spectator (TSS): What did you know of Slovakia before taking the job at TA3?

Zdenik Šámal (ZŠ): I knew what people said about life under the former government, that the journalistic community was divided into two camps - activists and collaborators with the [Vladimír Meeiar] regime on the one hand, and fighters for democracy on the other. I knew that some journalists still carried these identities with them today, and that rather than fighting for something they have instead become sort of professional fundamentalists. They see evil in everything, they try to turn everything into politics. As I discovered myself, it's true, but not as bad as people made out.

TSS: Is TA3 some kind of proof of maturity of the Slovak media market, if Slovakia proves able to support a channel offering an all-news format?

ZŠ: The fact that the TA3 project has arisen is proof at least that there are in this country skilful, enterprising people with a vision who aren't afraid to take on a project which contains many elements of risk. And the fact that such a project could arise means that certain minimal conditions had to be there, such as a licence. Such a project would find it almost impossible to get a licence in the Czech Republic. Slovak regulatory bodies behave more liberally.

TSS: Why did such a group of 'brave businessmen' not arise four years ago, when the need for objective news was probably greater?

ZŠ: Because a different government was in power four years ago, and conditions were different. It very likely would not have been possible then, either, even though I believe a significant proportion of viewers would have welcomed it.

ZŠ: They existed, but I think the fight for them would have been even tougher than it is now - Markíza, when it was created in 1995, was a solid alternative station, and was taken as a positive phenomenon in the Czech press. But it has changed since then.

TSS: What are the biggest problems you've had to overcome as editor at TA3?

ZŠ: I've experienced almost everything in the news field, but I've never run a TV station. I underestimated how much pain introducing a new technical system would cause. But after a few days I realised the truth of the universal saying "new life is brought into this world through blood and pain." Things we imagined in theory often worked quite differently in practice. As Jack Welsh said, "always be prepared to change your goals." I've always said this station's advantage is complete flexibility in everything.

TSS: You're doing without many administrative and support staff, and certainly have fewer people around you than you were used to having at Czech Television. Has lack of finances put strain on the TA3 project? Do you have enough people to make 17 hours of news a day?

ZŠ: When anyone complains about the conditions I always say that life is the art of the possible. We have what we have, and that's what we'll use to broadcast what we intend. We have to adjust to this [situation]. I don't know if you can link it directly to our financial situation and the development of our business plan, and I don't think that's even a question for me. But we have what we have, and I think it'll be sufficient to ensure the quality we aim for.

TSS: You've got quite a wide assortment of staff - experienced and inexperienced, from TV, radio and print media. Was the selection deliberate, or was it a reflection of Slovakia's limited media labour pool?

ZŠ: I'm doing the same thing with staff I did as editor in chief at Czech Television, and it worked well there. I never tried to convince our people 100% that this television was worth working for, I never responded to the nonsense in the papers that the station was a mouthpiece for Dzurinda, that we have his former spokesman leading us, I haven't tried to convince anyone that we aren't a laundry for the dirty money of the Medellin [Columbian drug] cartel, I haven't bribed anyone [to work at TA3], I've never told anyone they were a media star that we couldn't function without. I work here with people who volunteered to join us, and I'm glad they came of their own free will. And in the end it doesn't matter what kind of professional or educational background people have; it's much more important what they are capable of and how quickly they learn.

TSS: Still, with the live reports and the amount of news you are planning, TA3 will be asking a great deal of its journalists. Can you really contemplate such a tough project with inexperienced people?

ZŠ: The live feeds we have at the end of September will be worse than those we have at the end of December, that I can predict. It's a question of time and getting in the routine. But tell me how many journalists here [in Slovakia] would know how to do it [live reporting]? We went through some pretty intense job interviews, and I was able to take the measure of everyone I hired. I didn't see the need for a job search involving 8,000 applicants, where you would find unemployed railway workers who had decided to give their luck a try.

TSS: You've talked a lot in the past about the objectivity of TA3. One might imagine, however, that other TV editors in Slovakia would also like their stations to be objective, but haven't always hit their mark. What makes you believe TA3 will be any different?

ZŠ: Because I want it to be, as do my senior assistants. We have made sure this is understood by each individual employee. Above all, we have a dual-level editing control, meaning that each report will have to get past two people before it goes on the air. News created by people will never be 100% objective, but in this way we can get close.

Of course, I can't watch every minute of our 17 hours of news a day, and it may happen that someone broadcasts a five-minute PR spot saying that X or Y politician is a great guy and gave 200 crowns to charity - and I will find out about it the next day from the papers, or in a call from someone saying I'm a complete idiot. I'm in the hands of my subordinates as well.

TSS: If we could return to TA3 owner Martin Lengyel, Dzurinda's former spokesman, or Vladimír Mišauer, Dzurinda's former personal photographer who is now your assistant editor in chief - what do you say to people who look at TA3 and dismiss it out of hand as politically biased?

ZŠ: That they should sweep their own doorsteps first [ie remove the logs in their own eyes]. That they make sure the articles they write about us are not on the same level as high school essay assignments. That they not exaggerate a topic they know nothing about.

If we ever start continuously and demonstrably promoting any one political party, or Dzurinda himself, they can hold me responsible - if I'm still even around. But they really shouldn't blow this out of proportion. They should be taking care of the quality of what they are doing themselves, picking stories that have some point for their audiences, and not just surrendering their microphones to politicians. Only then will they have the right to judge others. These are the fundamentalists I spoke of before.

TSS: Do you see your station as having a larger social role than just informing the public? For example in shaping public discussion of integration or minority issues?

ZŠ: Of course we have those kinds of responsibilities. It's very easy to broadcast news saying "Gypsies steal and live off the state." On the other hand I don't want to become what we call in the Czech Republic a 'professional freedom fighter' who forces everyone to share some kind of universal love.

You mentioned some specific themes. Yes, Nato and the European Union are in the preamble of TA3's articles; we think it would be right for Slovakia to be accepted to these two bodies. But that means we will make sure people receive sufficient quality information, not that we will ensure all information is positive. We will give space to voices which are against as well. We will also try to be absolutely correct in our reports on Roma issues, all the while being aware that telling viewers that 'you are dogmatic, stupid racists and I am the intelligent missionary who knows how things should work' is not the path to a solution.