Groups working with mentally and physically handicapped people have attacked goverment approval of a revision to the law on social assistance benefits, saying a straight choice has been made between hitting economic targets and providing welfare for handicapped Slovaks - a choice in which the latter have lost.
The revisions, agreed to by cabinet September 28, will see the amount of money paid out in certain benefits fall and will introduce stricter criteria for receiving benefits. The move, which Social Affairs Minister Peter Magvaši has called "rather drastic action", will save the state one billion crowns ($20 million) next year. 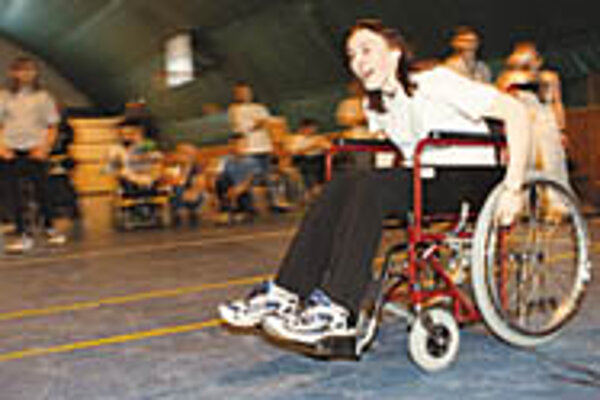 Font size:A-|A+  Comments disabled
Groups working with mentally and physically handicapped people have attacked goverment approval of a revision to the law on social assistance benefits, saying a straight choice has been made between hitting economic targets and providing welfare for handicapped Slovaks - a choice in which the latter have lost.

The revisions, agreed to by cabinet September 28, will see the amount of money paid out in certain benefits fall and will introduce stricter criteria for receiving benefits. The move, which Social Affairs Minister Peter Magvaši has called "rather drastic action", will save the state one billion crowns ($20 million) next year.

The Finance Ministry, which October 9 anounced plans to run a record 38 billion crown budget deficit next year, had been pushing for even deeper savings to be made.

But Štefan Tvarožek, director of the Gaudeamus dormitory for handicapped children in Bratislava, slammed the legislative changes. "If the revisions to the law are approved in the sense in which it has been made public, it wouldn't make the life of handicapped people any easier. We are extremely unhappy with what has been done to the [existing] law," he said.

Iveta Mišová, director of the Bratislava branch of the Association for Help of the Mentally Handicapped in Slovakia (ZPMP), said that government insistence that savings be made on state welfare would make it harder for handicapped people to live more normal lives.

"We think that a developed democratic community should take care of those who need the support and help of others to lead dignified lives and maintain their rights. Our association closely co-operated with the Ministry of Social Affairs in the drafting of these amendments. Unfortunately, having to save money meant that not all of our suggestions were accepted. We believe that during parliamentary approval of these amendments, MPs will think about those for whom the law itself was designed," she said.

However, the government has rejected claims that it is acting solely with its budget goals in mind, saying instead that it is trying to cut down on abuse of the benefit payments scheme.

"It is true that the government intends to reduce the benefit payments to handicapped people next year, and we are fully aware that this may be perceived as an unpopular step by many. However, this has come about because of misappropriation of benefit payments. The steps we are taking are extensive but they should prevent a continuation of this situation," said Jozef Mach, spokesman for the Finance Ministry.

A new law on social assistance came into effect in 1999, changing the method of assessment for disability benefits and raising some benefits from levels that had remained unaltered since 1992.

Until the new law was introduced, a medical assessment had been the basis for benefit qualification, leaving space, the Social Affairs Ministry said, for patients having personal relationships with doctors to win more favourable diagnoses. To root out abuse of this method of qualification, new multi-team assessments were implemented alongside the medical assessment, including the use of social workers to assess not just levels of disability but also the way benefits are used by each individual.

"The new assessments mean that we can guage exactly what the person applying for the benefits needs the money for, and how much should be given," explained Mária Nadazdyová, director of the social assistance division at the Social Affairs Ministry.

The September revisions, to come into effect next year if passed by parliament, will, the ministry says, further help stamp out abuse of benefit payments and free up finite resources available for state help to citizens.

Nadazdyová, whose ministry drew up the revisions, explained: "It's not fair to say just that we have cut benefits to people. We have tightened the criteria for qualifying for the benefits to make sure people will not abuse the benefits."

"In the revisions we've made clear who the benefits are there for. Some people just don't seem to understand that the state is, yes, there to help, but that people have to help themselves. They have to start thinking this way because resources are limited. If I were to misuse the benefits offered to me because of my disability, then someone else would miss this money," she added.

Social Affairs Ministry figures put the projected assistance benefits to handicapped people for this year at 2.78 billion crowns, a 30% jump on the 1999 figure. The figure for next year is planned at 2.66 billion crowns, but would have reached 3.61 billion crowns had the revisions not been made.

Nadazdyová said that despite the savings, there had been dispute within the government over the proposals, with her ministry in particular being unhappy at the size of cuts wanted by some cabinet members. "There was pressure from the Finance Ministry to try and save even more money, to make bigger cuts, but we needed to protect people with disabilities. We worked with the NGOs, and while we know they are OK with some of the changes, there are also many they are unhappy with. The government took the decision to make these revisions and it should be understood that [when making these decisions] they also have to look to the state budget next year," she said.

The latest changes have, analysts say, provided further evidence of Slovakia's move away from a social welfare system rooted in its communist past to one closer to western welfare system models and in line with EU regulations.

"These changes are a way of solving the abuse of the social welfare system and move Slovakia closer to European Union integration and western welfare systems," said Iveta Radičová of Comenius University's political science department. She explained that the latest proposed cuts should be seen as part of the 1999 revisions, and that while they might see less money in 2001, handicapped people would still cooperate with social workers to decide how the money should be spent - whether in buying a wheelchair or in helping them get back on the job market.

"This [the law revision] is part of a whole process of reform of the public sector that the government is moving to. The aim of these changes is to change the system of social benefits from just cash payments to social services - to give not just money but to help create opportunities [for handicapped people]."