"No one bothers with us, no one cares."
The message from Peter Jäger, director of water-cooler vendor Dolphin Slovakia, is a grim one, but one heard more than ever these days from increasingly disgruntled smaller investors who are trying to come to terms with what they say is the government's pursuit of FDI 'big fish' at the expense of investment 'minnows'. 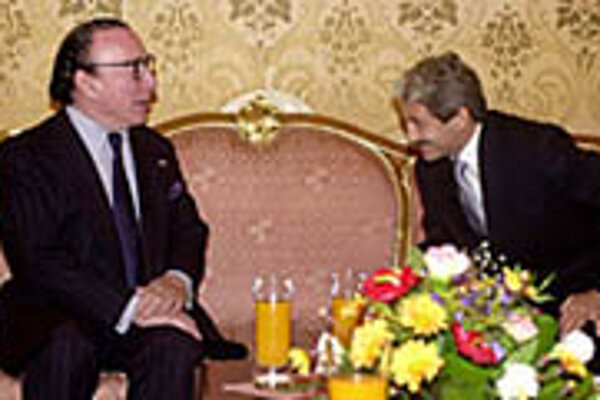 Font size:A-|A+  Comments disabled
"No one bothers with us, no one cares."

The message from Peter Jäger, director of water-cooler vendor Dolphin Slovakia, is a grim one, but one heard more than ever these days from increasingly disgruntled smaller investors who are trying to come to terms with what they say is the government's pursuit of FDI 'big fish' at the expense of investment 'minnows'.

As the new American Ambassador to Slovakia, Carl Spielvogel, and Prime Minister Mikulas Dzurinda told Slovak media October 6 that a series of special promotional events were to be held in the US next year to try and attract new US investment, smaller operators on the Slovak market remained critical of the attitude the government seems to be taking to minor investors.

"Of course, large companies are extremely important to the economy, but for every one of those there are many smaller companies," says Jager. "The government and its agencies are just running after the larger catches and ignoring the smaller goldfish in the pond," he adds.

"Small companies are left to find their own way, we have to learn to do that and deal with problems ourselves, overcome them without any other kind of help."

Danish Chamber of Commerce President Martin Wessel-Tolvik said that Jager's comments were far from uncommon. "There is a general perception based on the investment incentives that the government has offered that they are aimed quite certainly at the higher end [of FDI investment]," he said.

"If you go to all kinds of government/investor events you wil hear it said that the small investor is being overlooked in favour of large investments. However, while small investors have a general understanding that they would like to see incentives packages extended a bit further at their lower end, they are aware that there has to be some kind of lower limit," he said.

The most recent set of government incentive packages, due to take effect before the end of the year, would see a ten year tax break extended to firms investing more than 5 million euros, that level being lowered to 2.5 million euros for regions where unemploment exceeds 10%. The package also allows for subsidies of between 40,000 and 160,000 crowns if previously unemployed people are taken on at a firm.

But while the incentives have been widely lauded as among the most competitive in central Europe, and are expected to double the previous levels of FDI in Slovakia within a few years, analysts have said that the government may be ignoring smaller firms at its own risk.

Jager believes that the government could be taking another risk in not paying more attention to smaller investors.

"My company is looking to set up a bottling plant in Slovakia in about 18 months time. Now that would be an investment of about 30 million crowns, a fair amount of money. I haven't got around to contacting the government, but of course no-one is bothering to listen to us now at the agencies," he said.

The government's investment agency, SARIO, has rejected the claims that its efforts to secure important FDI are leading it to overlook smaller-volume investments.

"We are working to improve our service to all investors coming to Slovakia," said head of the board of directors at SARIO Alan Sitar. "We have limited resources to give to our effort as an investment agency, and we cannot provide the services we want to everyone. We naturally concentrate on larger investments, but not, we believe, at the expense of smaller ones," he added.

However, some potential investors remain unconvinced of government agency willingness to help them.

Gerard Heikens, managing director of the Slovak powder-handling equipment firm GM Engineering, said: "SNAZIR [SARIO's predecessor - ed. Note] always claimed that it had a small budget and was limited but they couldn't even afford the price of a phone call for me. I met them last November in Holland when I was looking for a partner for GM Engineering and had a long meeting with them, for hours, but then I heard nothing after that - not a phone call or a single letter, nothing," he explained. "There was no follow-up at all, nothing."

"The government is not being active enough. If it wants investment all I can say is that if you want to win a war you have to be prepared to fight, to do something. There is a lot of talking but not much doing."

Heikens added that he had given up trying to enlist the help of the government agency in finding a partner. "I've learnt from my past lesson," he said.

In the face of the criticism SARIO remains convinced that its approach is one that will ultimately pay dividends. "We believe that by attracting the biggest firms to Slovakia there will be a trickle-down effect with smaller businesses following as well on increased investments overall," said Sitár.

The gamble has, if not many backers, a certain logic.

"It would be unfair to say that the government is doing anything wrong in focusing on the bigger [FDI targets]," said Slávia Capital's Kabát. "In building an investment environment they have to go after the big investments. If problems can be solved with big company investments then that is going to have a much larger influence on the investment climate than if a small company has a problem and the government tries to solve that problem."