After nine months of discussion and debate, reforms to the Slovak Constitution still appear to be months away. Although coalition deputies and constitutional experts agree that a revision is inevitable due to the faulty wording of the original version written in 1992, it is still not clear when the document is likely to be passed since all coalition partners have yet to throw their support behind the draft in its current form.
The delay over constitutional reform is holding up work on other reform initiatives, such as changes to the way in which Slovakia is governed, and improving control over public spending, judicial independence and social justice. 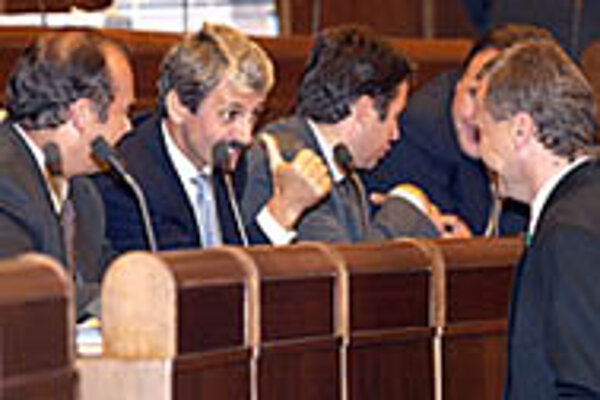 Font size:A-|A+  Comments disabled
After nine months of discussion and debate, reforms to the Slovak Constitution still appear to be months away. Although coalition deputies and constitutional experts agree that a revision is inevitable due to the faulty wording of the original version written in 1992, it is still not clear when the document is likely to be passed since all coalition partners have yet to throw their support behind the draft in its current form.

The delay over constitutional reform is holding up work on other reform initiatives, such as changes to the way in which Slovakia is governed, and improving control over public spending, judicial independence and social justice. While these changes are perceived as vital for EU entry, critics have accused MPs of holding constitutional reform hostage to narrow party interests.

In order to pass the reforms, 90 of 150 members of parliament must vote in support. Three coalition parties - the Slovak Democratic Union (SDK), the Party of Civic Understanding (SOP) and the Party of the Democratic Left (SDĽ) - can muster 76 votes between them, while the fourth coalition partner, the Hungarian Coalition Party (SMK), adds 15 MPs for the necessary 90 vote quorum.

However, the Hungarians have refused to endorse the proposals as they accuse their government partners of ignoring SMK priorities. If the SMK can not be persuaded to vote with the coalition, the reforms will have to be abandoned.

"For a constitutional revision, a two thirds [parliamentary] majority is required, and I am curious to see if they will actually get it," said Katarína Závacká, head of the Institute of State and Law in Bratislava. "They are fighting about unimportant things, and many MPs don't even realise just how important this revision is."

The SMK has over the past few months repeatedly complained that their party priorities were not being addressed by the the SDK, SOP and SDĽ. As a result, they have threatened to abandon the four-party government coalition and now insist that they will not support the constitutional reforms unless changes are made to their satisfaction.

One change the SMK is particularly interested in seeing through is an article that would ensure the transfer of 'unidentified land' - land not reclaimed from the state by former private owners following the fall of communism - from national to municipal control. At the moment, the land - most of which lies in the Hungarian-dominated south of the country - is administered by the national Land Fund. Although the government specifically promised in its programme to give these territories back to municipalities, the Agriculture Ministry has refused to make the change - a stance which the SMK has called a violation of the coalition agreement.

"We haven't decided yet if the SMK will support the reforms," said Miklós Fehér, SMK deputy and vice-chair of the parliamentary Constitutional Committee. "Our problem with the draft is that apart from a few minor suggestions, our proposals have been omitted. We specifically want to include an article concerning the transfer of unidentified land to the administration of local municipalities."

The SMK also proposed to have the constitution's preamble changed from "We, the Slovak people..." to "We, Slovak people, together with representatives of national minorities and ethnic groups living on the territory of the Slovak Republic ..." .

The Hungarians said that they wanted the preamble changed because the current proposal could be interpreted as referring to only ethnic Slovaks. "I have proposed the change because I feel like a second class citizen in Slovakia," said SMK deputy Pál Farkas.

Many experts agree that these demands are reasonable, but say that in acceding to them, the other three coalition parties may fear losing support among nationalist Slovak voters. The preamble problems, Závacká explained, could have been solved long ago but for primitive political posturing on the part of several Slovak politicians. "The [dispute over the] preamble is just a case of nationalistic [Slovak] politicians making a big problem out of the wording in an attempt to win the hearts of 'true Slovaks'," she said.

SDK deputy Ivan Šimko, one of the four deputies who co-authored the current reform draft, said that the draft contained five major changes to the constitution designed by him and co-writers Peter Kresák (independent MP), Pavol Hrušovský (Christian Democrats, a party within the SDK) and Ladislav Orosz (SDĽ).

"Overall, the constitutional revision aims first to harmonise Slovak and foreign legal systems in order to assist Slovakia's integration process into western structures," Šimko told The Slovak Spectator in the parliament building on October 3. "The second major change gives the Supreme Control Office (NKÚ) the right to control the financial operations of the state's National Property Fund [privatisation agency], because the NKÚ currently has no such right."

Šimko explained that the third change concerned public administration reform (see editorial, page 4), while the fourth revision would create the position of an ombudsman, or a "protector of human rights in the country".

"The last revision would create a central organ of judicial self-administration in order to strengthen the independence of the courts," Šimko continued. "This will help the courts and judges become more independent from the government and will hopefully allow for more internal control, thereby giving more responsibility to Slovak judges."

The draft revision was originally scheduled to be discussed in parliament at the October 3 session, but a September 14 coalition decision postponed the debate until after the November 11 referendum on early elections.

Kresák explained that the delay had been called for fear that the opposition Movement for a Democratic Slovakia (HZDS) and Slovak National Party (SNS) could use the proposed reforms - and the evident disunity within the government over the form they should take - as a means of gaining public support for the referendum. "According to the information we have, it could have happened that the constitutional revisions would have become a tool to gain support for the referendum," he said.

Even when parliament finally does address the reforms, Šimko said that more delays could be expected as further proposals and revisions would likely be put forth during the November parliamentary sessions.

Závacká said that more delays would be costly because the current constitution had many loopholes creating several legal ambiguities. "The current constitution was produced by people who were totally unqualified for the job," she said. "They [a team which included former Prime Minister and HZDS boss Vladimír Mečiar and former speaker of parliament Ivan Gašparovič, also a HZDS member] didn't have time to study democratic constitutions, so they just copied parts of the 1920 and 1960 Czechoslovak constitutions and welded them together."

Gašparovič disagreed, saying that the 1992 version of the constitution needed no reforms. "The (1992) constitution is a modern document which meets all criteria connected with EU and NATO integration," he said. "It's based on democratic principles recognised in the developed world. The HZDS will not support these revisions."

But Šimko said he was optimistic that the revisions would eventually gain the support they needed to pass through parliament some time next year.

"At the November session we expect a lot of proposals which we will try to incorporate into the draft," he said. "But I would say that sometime in 2001 we will have a revised document ready to be passed."