Eleven years after the fall of communism, the relationship between Slovaks and Russians remains in limbo. While the Slovak government pushes for acceptance into western bodies like the European Union, NATO, and the OECD - often at the expense of retaining close ties with Russia - the country itself seems split over how the future relationship should develop.
"I have nothing against Russians," said 26-year old Patrik Roľko from central Slovakia's Brezno. "I don't have any trauma from the past. Maybe the older generation remembers bad things, but I had no negative experience with the Russians." 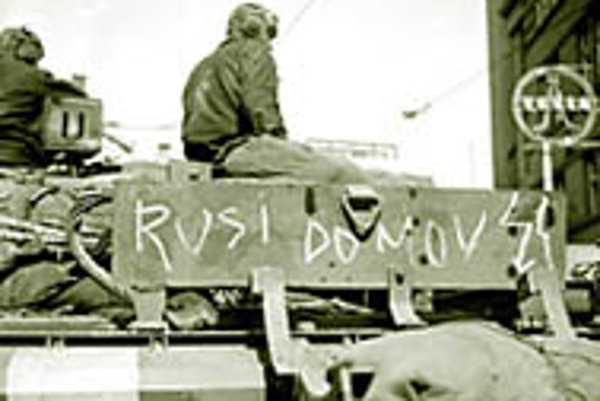 Font size:A-|A+  Comments disabled
Eleven years after the fall of communism, the relationship between Slovaks and Russians remains in limbo. While the Slovak government pushes for acceptance into western bodies like the European Union, NATO, and the OECD - often at the expense of retaining close ties with Russia - the country itself seems split over how the future relationship should develop.

"I have nothing against Russians," said 26-year old Patrik Roľko from central Slovakia's Brezno. "I don't have any trauma from the past. Maybe the older generation remembers bad things, but I had no negative experience with the Russians."

Countered 17-year old Ivana B. from Bratislava: "I don't see why we should go back to closer ties with Russia. I thought the point of the revolution in 1989 was to get rid of communism, not go back to it now in the year 2000."

While a division in opinion exists, political analysts as well as ethnic Russians living in Slovakia agreed that Roľko is a more representative Slovak. Having no particular anti-Russian sentiments despite the former USSR's domination of eastern bloc countries, most Slovaks are accepting of Russians, they said.

"Slovaks are friendly people and they have always treated me as a friend," said Olessia Devitchinskaia, a 24-year Moscow native who has studied at Bratislava's Comenius University for four years. "It's different here than in the Czech Republic. People there, especially the younger generation, don't like Russians and they let it be known."

Other ethnic Russians echoed Devitchinskaia, adding that other former eastern bloc countries still seemed angry about the past. Events such as the 1956 suppression of the Hungarian uprising, the 1968 invasion of Czechoslovakia by Warsaw Pact tanks during the Prague Spring, and the oppressive policies of 'normalisation' which followed each act, they said, have not been forgotten by other nations, although Slovaks have generally been more forgiving.

"I don't remember any negative experiences [in Slovakia] because of my being Russian," said Union of Russians head Alexander Tchumakhov, who was born and raised in Slovakia by his Russian father and Czech mother. "The only tough period was in 1968, when some Russians had to change their names because the sentiment then was so strongly anti-Russian."

"I did feel some antipathy when I first came to Slovakia," added Russian Anna Antolová, who has been living in Slovakia for 12 years. "Mainly this feeling came from the events of 1968. But the people did not realise that I was not at fault for what happened back then. It was the politicians who decided to invade the country, not me."

Ivo Samson, from the Bratislava-based Slovak Foreign Policy Association (SFPA), said Slovaks were friendlier than other regional countries to Russia because the Prague Spring was perceived to have been directed more at the Czechs than the Slovaks, and because events after the invasion actually marked an improvement for the country in that Slovaks were given more representation in the communist Czechoslovak Republic government.

"The Prague Spring produced a federation of Czech and Slovak republics [within the Czechoslovak Republic] and Slovaks got posted to key positions in the state administration, like the general secretary, and the president."

As a result, Samson continued, the current day relationship between Slovaks and Russians was more "indifferent" than hostile. While other nations remained aggressively anti-Russian, he said, Slovakia had instead shrugged off the past.

"Among the Visegrad Four countries [Hungary, Poland, the Czech Republic and Slovakia], Slovakia is the only nation which is not a priori anti-Russian," Samson said. "Of course, Slovaks are not totally pro-Russian either, but rather they are indifferent.. This stance means that possible pro-Russian politics wouldn't meet with strong protests from common citizens."

The Union of Russians' Tchumakov said that Slovakia's largest ethnic Russian community resided in Bratislava (approximately 600), while other significant groups could also be found around Banská Bystrica and in the Košice region.

"There are a total of 2,200 Russians who are Slovak citizens," he said. "I'd estimate that there are about 10,000 Russians living in Slovakia, but most are businessmen, or sportsmen who don't have citizenship."

Russian immigrants first arrived in Slovakia in 1917 after Lenin's revolution, Tchumakov continued. In the 1950s, a second wave came when student exchange programmes between the USSR and Czechoslovakia intensified, often resulting in Russian-Slovak marriages. The last significant influx of Russians came after the 1989 Velvet Revolution.

Considering the countries' common pasts, Tchumakov said that Slovaks should be more eager to maintain close ties with Russia. Viktor Michurin, the first secretary and cultural attaché of the Russian embassy in Slovakia, agreed. By focusing on the West too much, he said, valuable economic relationships with Russia may be lost. "A small country like Slovakia can hardly be successful on the western market now," Michurin said. "Russia offers big possibilities in the economic respect."

"There are many things we have in common, like our Slavic roots, history and culture," Tchumakov said. "But it seems that sometimes we are too westward looking and tend to forget these things."